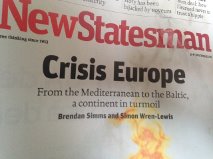 In the New Statesman this week, there is an excellent and long article by Mark Cocker on shooting (Unfair game: why Britain’s birds of prey are being killed). I recommend it as an interesting read and because it will bring the plight of the Hen Harrier to a new readership.

The most interesting quote in the piece is from the Game (and Wildlife) Conservation Trust’s Andrew Gilruth who speaks thus of the Langholm study (Langholm 1) ‘The tragedy of Langholm is that we sat down at the end and felt that in many ways it proved that those gamekeepers who killed raptors illegally had in some way been right to do so’.

I know what he means, bu this might not be the most helpful way to put it.

The Langholm study is the subject of the whole of Chapter 3 of Inglorious – conflict in the uplands, which I am told was briefly #7 best seller of Amazon’s Hunting and Shooting books (even though it isn’t published yet!).  I don’t remember Andrew Gilruth being around at the time of the end of the Langholm project, but I was. When the RSPB sat down at the end of the Langholm project we looked for a solution and the work on diversionary feeding, largely shunned by the upland shooting community, is a result. It seems that too many upland estates, sought a different solution which is why the Hen Harrier numbers are so depressed.

2 Replies to “Not very new, and not very statesmanlike”