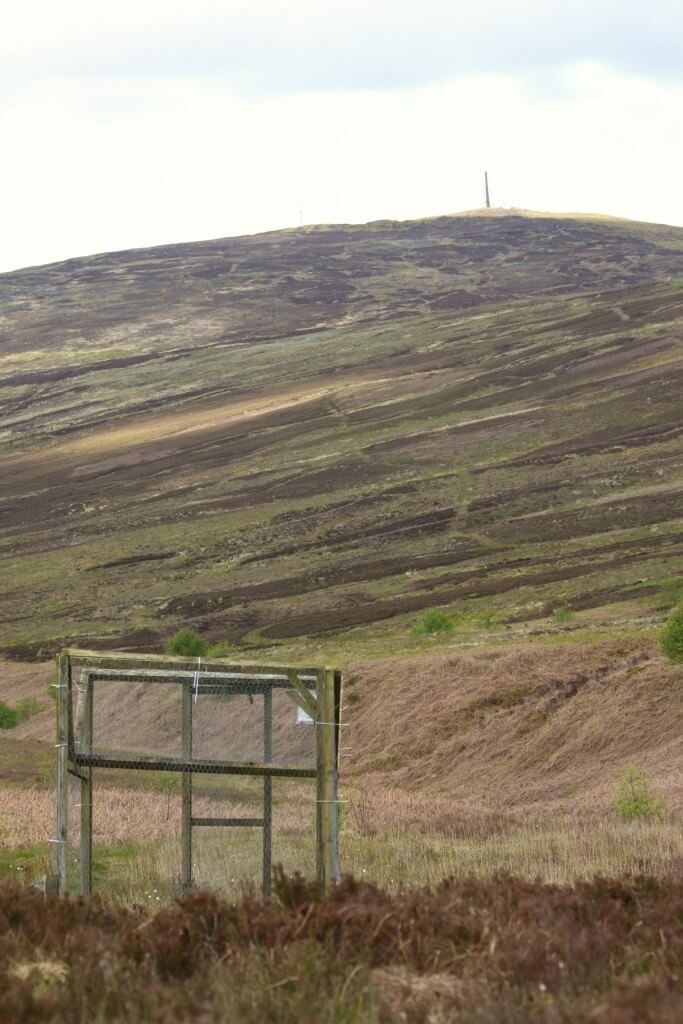 Admittedly you can’t see my friend Henry in this photo, but I promise he was here. And ‘here’ is Langholm Moor, the Duke of Buccleuch’s place which hosted the first Langholm study and is hosting the second one (of which more on Thursday).

It’s a crow trap in the foreground, and Whita Hill in the background, with the obelisk commemorating Sir John Malcolm atop the hill.

The first Langholm study (the subject of the whole of Chapter 3 in Inglorious) was very important in setting the framework for the conflict between nature conservation (particularly of birds of prey) and driven grouse shooting. When birds of prey were protected at Langholm their numbers increased – this was true of Hen Harriers and Peregrines.  The higher numbers of birds of prey resulted in much lower numbers of Red Grouse than expected on the moor at the end of the breeding season, although breeding numbers each spring remained pretty constant.  What this meant, and showed for the first time, was that when protected from persecution, birds of prey could remove the shootable surplus of Red Grouse on which grouse shooting depends.  In other words, the raptors were unsportingly eating the Red Grouse before rich people could shoot them for fun. That is the essence of the conflict between birds of prey and grouse shooting. It’s a bit more complicated than that – but not really much more complicated.

The law of the land says that you can’t kill Hen Harriers and Peregrines but the laws of nature say that if you want to run an intensive driven grouse shoot then those raptors are likely to destroy your business. That’s why there is a conflict. Killing birds of prey is entirely rational if you want to make money from shooting Red Grouse and entirely illegal.

It’s not very easy to square this circle – and nobody has succeeded (though see tomorrow’s blog) – and that’s why, eventually, on this issue, you have to make up your mind which you want. Driven grouse shooting or birds of prey?  I started, as many do, by thinking I could have both – it’s the British search for compromise – but now I’m pretty sure you can’t have both (partly because the grouse industry is intransigent and partly because killing raptors is so easy) and so I have to choose. I choose birds of prey!