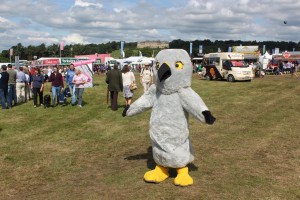 Yesterday I didn’t go to the Game Fair but the Today programme did. And Farming Today were there too.

Farming Today repeated C(W)TG’s Andrew Gilruth’s inability to answer a question here after about 15 minutes. Did you notice how Andrew claimed that grouse moors had been designated because they were teeming with wildlife? He’s such a joker isn’t he? And he forgot to say that many sites were designated for their Hen Harrier populations which are now either hugely diminished or completely absent. Funny it slipped his mind. He needs to read  Inglorious from cover to cover but he could start on page 32 to refresh his memory on Hen Harrier absence from SPAs designated in part because of their former presence (and that is two pages before the first of six name-checks that he gets in the book).

Andrew then wanders up a Welsh hillside with a ‘post hoc, ergo propter hoc‘ argument, which is, also, an anecdote not a general case. But in any case, we do know, and fully acknowledge, that some species do well on driven grouse moors whereas a lot of others do very badly – read the book Andrew – don’t accuse me of cherry-picking when you are the master of it. Rather sour cherries though, aren’t they?

When Andrew comes down from his hillside he zig-zags, snipe-like, to avoid addressing the results of the EMBER study.  I particularly enjoyed ‘Floods are caused by extreme weather events on saturated ground not by grouse shooting’ – a quite masterful evasion.

Have you noticed how the G(W)CT (is that right? we all forget) never field a scientist these days to talk about these issues? And never their Chief Exec, Teresa Dent?  It’s either their chair Ian Coghill or their spin doctor Andrew Gilruth.  How odd, don’t you think?

Did Andrew say anything about the five missing Hen Harriers? No, more evasion. But then he dismisses the five-year, ten-catchment, EMBER project and mentions a couple of other studies which are largely irrelevant to the points he was asked. Of course, the interviewer, Charlotte Smith won’t know that, but it gets G(W)CT through another interview without addressing the issues raised.

I did manage to get the last word – although that was complete luck and bad luck for Andrew, and good luck for me. We recorded a much longer conversation last week and in real life, when it ended, Andrew had got the last word – it happens in about 50% of cases! So I was glad that the editing ended up with the interview ending on the note that it did – me correcting Andrew on climate change and pointing to the Climate Change Committee’s statement on management of grouse moors – here it is again to remind him ‘The damaging practice of burning peat to increase grouse yields continues, including on internationally protected sites.’.

I’m very happy with the cut and thrust of short debates on the radio – they are quite fun – but if you want to get into the detail of the arguments then you could read 100,000 words on the subject: Inglorious conflict in the uplands was written to explore these issues.

When the Today programme came to play at Harewood House, Jim Naughtie kept calling the event a celebration of the countryside – it’s the Game Fair! – the clue is in the name. It’s a celebration of ‘Hunting, shooting and fishing with added tweed’ as Farming Today had more accurately described it a few minutes earlier.

Richard Ali and Jeff Knott had a good discussion (as they say). Jeff Knott and the RSPB are particularly concerned about the killing of birds of prey and the over-burning of heather moors. Did Richard Ali really say that it’s very difficult to know about the level of persecution of birds of prey? Did he fall back on the ‘People are not being prosecuted’ line? Shooting is an industry in denial and not facing up to its ills in public, nor in private. Jeff did a great job and kept coming back to the real problem of illegal persecution – wildlife crime.  When Jim Naughtie asked whether there was a real dialogue going on Jeff said there was but that people needed to face up to the real problems. What this blog can say, is that neither Richard Ali of BASC, not Andrew Gilruth of G(W)CT, faced up to those issues.  In their own ways (Andrew is rather more adept at it) they are spinning away like mad – denying problems that the world can see as plain as the noses on their faces.

And no number of grouse-flavoured crisps (Farming Today about 11 minutes in) will change the image – by the way, is that grouse with the lead left in or taken out? It’s not actually clear whether the grouse has been left in or taken out anyway? It wouldn’t surprise me that much if these game-flavour crisps are suitable for vegetarians.

4 Replies to “More on the Game Fair”