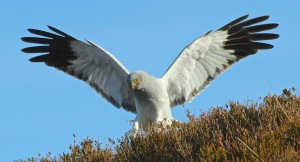 I’m grateful to various clever people for contacting me about yesterday’s blog about the extreme unlikelihood of so many male Hen Harriers disappearing from active nests with RSPB involvement.  My brain was aching a bit so I am grateful for others’ input.

Here are the probabilities of other numbers of disappearances:

1 or more is 37% (so still more likely to lose none)
2 or more is 7.1%
3 or more is 0.84%
4 or more is .064%
5 or more is .0033%
As far as I know, but I don’t know much, the males survived at the three other nests in England this year.
So there must be something pretty odd happening.
I think some people may have missed the point of yesterday’s blog – yes, we all know that Hen Harriers are persecuted in various ways (Inglorious Chapters 1 and 6 are good places to read about this type of thing) but my suggestion is that nests with some sort of RSPB involvment were targetted specifically this year to make the RSPB look ‘bad’. If this happened, then whoever was doing it went a bit over the top didn’t they?
The press headlines from the grouse shooting side are all about how many chicks were produced and how many nests failed. They indeed don’t look great for RSPB because quite a few chicks fledged from non-RSPB-involvement nests. This makes a good headline for the grouse shooting side of the argument, but things look very different when looked at in the way of yesterday’s and this blog post.
Of the 9 Hen Harrier nests with RSPB involvement 3 succeeded (2 on FC land and 1 in Bowland) and 6 failed. Of the 6 that failed, including the one at the RSPB nature reserve at Geltsdale, 5 lost their males.  The chance of 5 nests losing their males over this period is around 0.0033% ie it is vanishingly minute.
So, something very odd is going on. It’s either that the RSPB are really really rubbish at guarding nests and cause male (but not female abandonment of nests) or that some other factor is involved.  My money would be on the other factor. My money is that it would be wildlife crime, and perhaps coordinated and targetted wildlife crime.
Please sign this e-petition to Ban driven grouse shooting.
[registration_form]