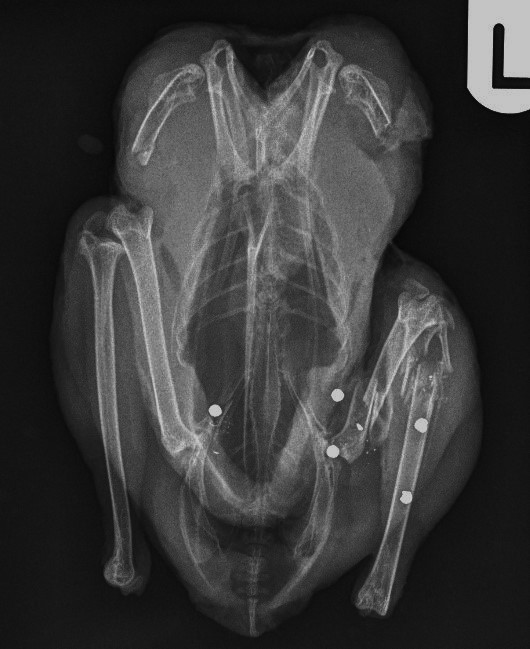 Yesterday’s mystery bird was another partridge – are you getting good at this?

Here again, some of the lead fragments are highlighted in red. Again, there are lots of them and the fragments are really small and spread through the flesh of the live (but dying bird) and through the meat when it arrives on your plate. 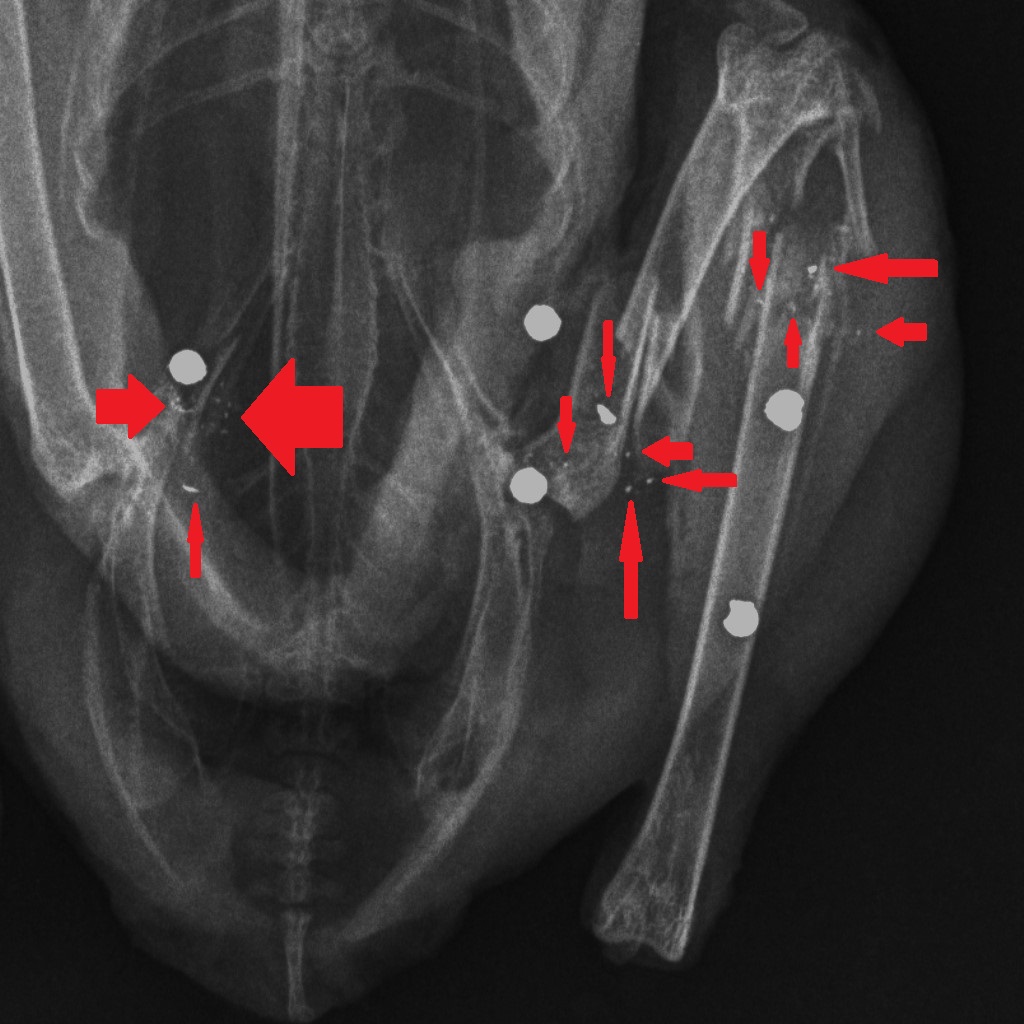 Research on lead levels in game meat, are measured once the whole shot are removed, the bird (or mammal) has been cooked normally and the lead levels of the remaining meat analysed.  I cannot stress enough, because people keep missing this point, that the meat lead levels assume that all complete lead shot are removed in the preparation, cooking or eating process (which sometimes they won’t be in real life).
If this meat were beef, pork, chicken or anything else except game, then a level of 100 ppb ww (parts per billion wet weight) is set by law. Higher lead levels than that are illegal. In a study published in 2010 (yes, five years ago), the following results were found for partridges like the ones X-rayed here. 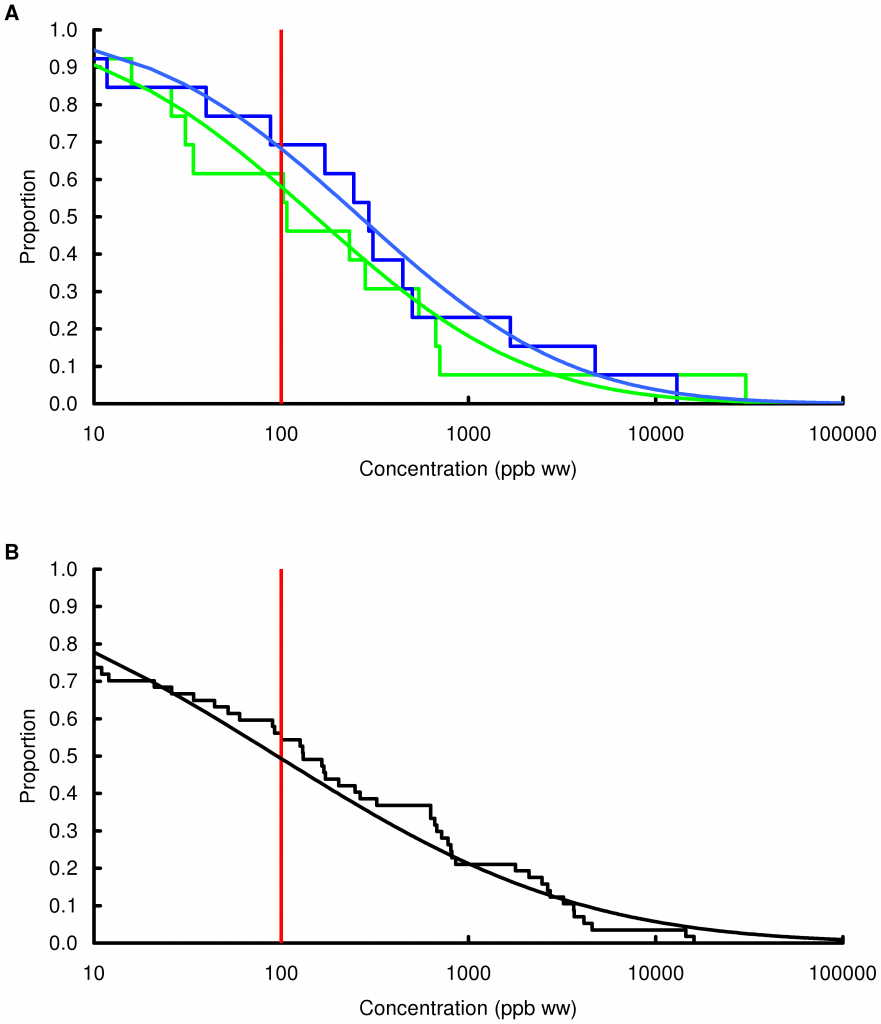 Graphs A and B are from two different studies, and the green and blue lines in graph A are from two slightly different ways of cooking the partridges.  The red vertical line shows the lead level that would be legal for non-game meat – all the samples ought to be to the left of the red vertical line if this meat were beef, pork etc.
For game, for some strange reason lost in the mists of time, there is no maximum lead level set for meat – there is no vertical red line – despite the fact that game is usually shot with lead. And despite the fact that we know that lead fragments in the flesh of birds and mammals into which it is shot.
But if there were a lead limit set, and if it were the same as for beef, pork, lamb, chicken, turkey etc, then the results shown above demonstrate that more than half of partridges you would eat would be over the limit. And around 10-20% of partridge meat that you eat would be ten times over the limit. And there would be a few, let’s say 1-10%, of partridge meat that would be one hundred times over the limit, and there would be a small number of partridges which would deliver to you lead levels of thousand times the limit.
So, if you were very unlucky you could ingest as much lead in one partridge meal as you would get in several thousand chicken meals. And if you were quite unlucky, you would get a lead dose equivalent to several months’ worth of eating non-game meat.
These results have been available for five years, and will no doubt have influenced the Lead Ammunition Group’s findings which suggest that a ban of lead ammunition should be brought in (for wildlife health reasons as well as human health reasons).  They haven’t yet influenced Defra who are sitting on the results, and they certainly haven’t influenced the Countryside Alliance, BASC, GWCT etc who keep promoting lead-contaminated game meat as a healthy option. 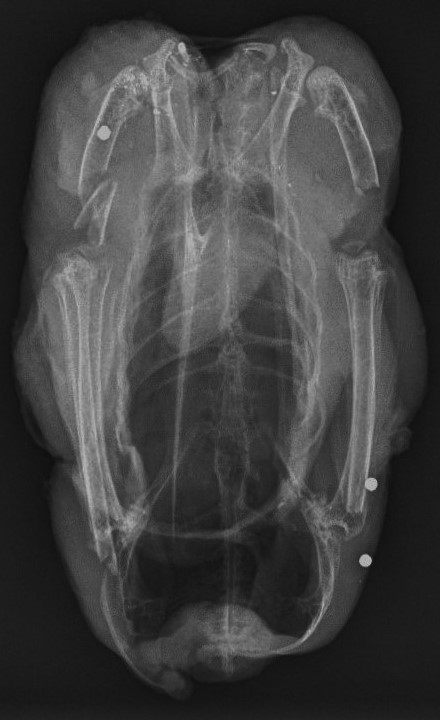