It comes to something when four species of birds I have seen this year in the UK are added to the list of globally threatened bird species.

The IUCN Red List is updated periodically, after much sucking of teeth and poring over the data (some of which are a bit ropy) and Birdlife International are responsible for the avian part of the list. This list highlights those species which are judged to be most in danger of global extinction, ie being snuffed out completely.

Many species on the list are of low population size, sometimes endemic species on small island groups in the middle of distant oceans. But, quite correctly, still-common species which are declining rapidly in population are also added to the list.

I say ‘quite correctly’, because I’ve long been of the opinion that lists of conservation concern should flag up those species which are declining rapidly, even when the species is still ‘common’ (see Fighting for Birds p64).  And I even wrote a book about one of the species that so well illustrates this idea – the Passenger Pigeon. If there had been decent monitoring schemes in place in nineteenth century North America they would have shown the Passenger Pigeon to be the most numerous bird on the continent, but rapidly declining, as little as 50 years before it went extinct in the wild. Any system of identifying species of conservation concern has to flag up the Passenger Pigeon long before it gets to the last few birds.

There are some snags in listing common species as endangered. First, people might not take much notice of the listing because they say ‘there are loads of them – don’t fuss’ and second, because sometimes species will, perhaps, stabilise at some new lower population level. These are snags that can be dealt with – the first is a communications challenge and the second is a good thing anyway.

Whereas in the past, the ‘typical’ extinct bird was flightless and/or of restricted range, that is not going to be the case in the modern world. We now have the ability to wreck the whole planet, not just little bits of it bit by bit. In the past we would turn up on a remote island, chop down most of the forest, shoot a lot of its wildlife, introduce pigs, cats and rats, and then, too late, wonder why the native fauna disappeared.

But now, our species is so powerful, so influential, that we have transformed and continue to transform the area of forests (we cut them down), the farmed land (we spray it with poisons and make no allowance for nature), the seas that make up most of the planet (we over-exploit them) and even the very climate of the air that swills around above our heads (we are cooking the planet).  Practically nowhere on Earth where life is possible remains untouched by our species. Practically nowhere on Earth remains undamaged by our species.  And so, most species will suffer, and a few will benefit.  But the species that suffer will no longer be those restricted in range where a group of Victorian men with guns, axes and rats went a bit bonkers – it will also be those that are widespread – for we have gone a bit bonkers everywhere.

We are not living sustainably when the list of threatened species grows each year.  Nothing is a clearer indication of our unsustainable lifestyles and impacts than that we are driving more and more species with which we share our only home towards extinction.

The four species added to the globally threatened list this year tell a story. The Pochard is a species I see on almost every visit to Stanwick Lakes – it’s not rare. But globally, it is declining and that decline is reflected in counts for the UK and for all UK countries. A decline of between a third and a half in just over a couple of decades is a major decline. If it continued into the future then the Pochard might leave Earth at around the same time that I might. I don’t want to be shuffling off this mortal coil with the Pochard. By the way, not spreading lead shot around all our wetlands would be a good idea as one thing that would help this species (just saying).

The Slavonian Grebe is a rare bird in this country, certainly as a breeding species, but is declining around the world. Climate change? It’s a species of high latitudes where climate changes more rapidly (and arguably the ecology is simpler and gives, perhaps, less room for manoeuvre for affected species).

The Puffin will be the species which gives most people a frisson of displeasure at its listing. Everyone loves a Puffin – even if hardly anyone has ever seen one (normal people that is).  Often referred to as ‘the comical-looking Puffin’ it should now be thought of more along the lines of ‘the tears of a clown’. To imagine a world without Puffins is awful.

But the species which I actually find most poignant is the Turtle Dove. When I wrote of it in A Message from Martha I made the link with the decline of the Passenger Pigeon and things have accelerated in severity in the last couple of years. This year I have seen one Turtle Dove – which was sufficiently noteworthy to merit a blog I thought.  The information we have on nesting success of Turtle Doves suggests that farmland is just not suitable for them any more. Disease may play a part, and shooting can’t help, but this bird now has atrocious breeding success in the British countryside. If the few that get back here each year, and which have the pick of the whole of southern England to nest in, produce very few young then that shows how awful the ecology of farmland is.

Depressing isn’t it? We should remain silent for the ‘two Turtle Doves’ part of the 12 days of Christmas from now on.

But that is the future. We will see more and more species, and more and more familiar, widespread and common species, declining and being brought to the brink of extinction, with some falling off the cliff. We can save some of them through conservation initiatives, but not many.

And who is asking us to choose? 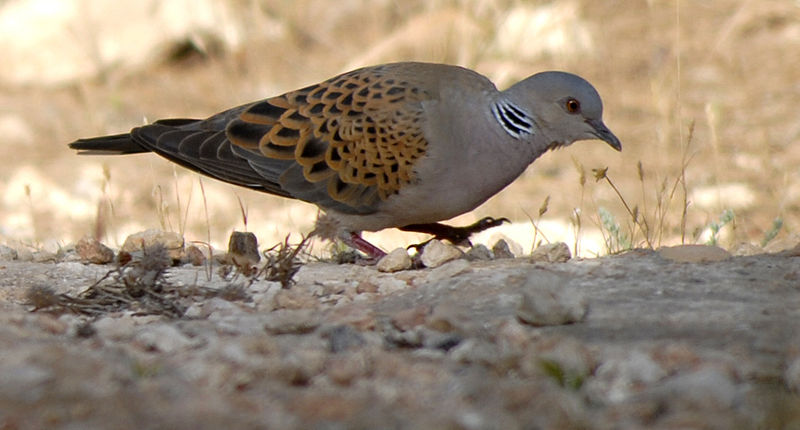