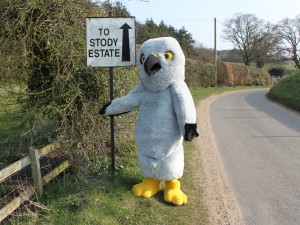 The raptorpersecutionscotland blog is on a roll at the moment and yesterday disclosed the fact that the Stody Estate has been fined, probably three quarters of its single farm payment, for the Buzzard killing on its land revealed by the conviction of its former gamekeeper Allen Lambert.

This is excellent news and shows how the legal system can be used as a strong deterrent against wildlife crime. Although, oddly, the RPA has not confirmed the amount of the withdrawal of Single Payment, it is thought to be in the order of £200k.

It seems odd though, that we first heard this news from an excellent blog using the FoI process rather than from Defra or the Rural Payments Agency.

If large fines such as this one are to act as a deterrent they must be in the minds of potential criminals – so why hadn’t we heard about this case already? And speaking as one of the many people who contacted RPA over this case, several times, why hadn’t we been told? Publicising the fine would encourage those raptor workers, Birdtrack contributors and RSPB Investigations staff whose hard work assisted in this case.

The RPA is a Defra agency and issued press releases on 28 October, 4 November and 10 November, but didn’t mention this case.

If you have the time to contact the RPA to ask them about this don’t use the number on the GOV.UK website (0345 603 7777) because it isn’t in use any more (although still listed on the website, and only came into existence less than a year ago). You could, as I did, try the other number 03000200301, and eventually you’ll find someone who doesn’t know anything about the Stody Estate, can’t use the reference number you have been given on previous enquiries to find anything out, and cannot transfer you to anyone who can help. In other words, I did bother but I wouldn’t if I were you.

Could you please confirm the amount that the Stody Estate was fined and the reasons for the fine?

Hint: it was probably to do with the dead Buzzards pictured below which formed the largest single raptor-poisoning case in England.