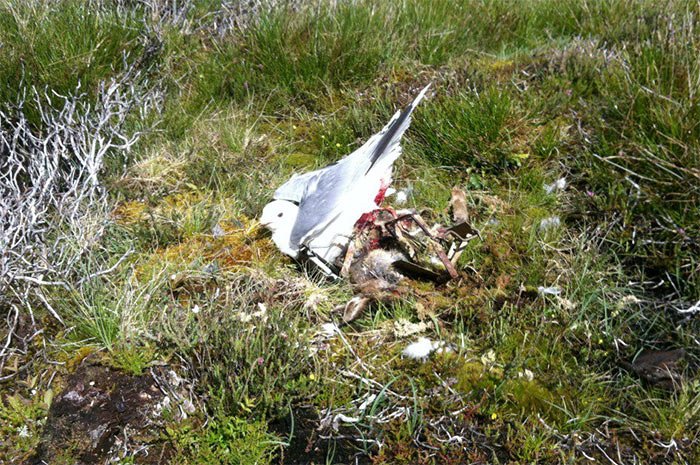 Another month, another illegal trap, another driven grouse moor in another National Park.

This trap, in fact these traps, found in the open by two walkers, were more easily located because they contained a severely injured Common Gull whose injuries were so bad that it was euthanised. The story is well told by our older brother blog at Raptor Persecution UK.

It’s ‘just a gull’ that died after hours of pain, and whose death led to the starvation of its chicks it seems; and it’s just one incident and nobody approves of it, we will, no doubt, be told.

But it’s another example of criminality on the grouse moors and those incidents that come to light are not the tip of the iceberg, they are the tip of the tip of the iceberg.  Driven grouse shooting depends on wildlife crime to rid the hills of predators, legally and illegally, and the collatoral damage to wildlife is just the price that we all pay for the pointless hobby of the few.  The public is fed up with wildlife crime emanating from grouse moors and in droves is signing this e-petition for the future of driven grouse shooting to be debated in the UK parliament.

Invercauld Estate, on which this incident appears to have taken place, must be mystified by how an illegally set trap appeared on its land so far out of the way from easy public access.  The Cairngorms National Park must be similarly mystified as well, although is probably getting tired of having to say how mystified they are by wildlife crime in their National Park.  No doubt the  Scottish Land and Estates will be mystified. I expect the Game and Wildlife lot will be saddened, cross and mystified too.  If anyone can help dispel the mystery then the place to phone is Police Scotland by dialling 101.

It’s all so mysterious…

Invercauld is the estate of Clan Farqharson. The Farqharsons are related to the van Cutsem family who were unlucky enough to experience a problem with illegal traps on their own grouse moor in Yorkshire earlier this year (see here and here). Lucy van Cutsem is photographed here with the former stalker from Invercauld, Peter Fraser, who was named as one of Prince Charles’s countryside heroes in Country Life in 2013, and who moved next door to become a ghillie on the royal estate at Birkhall (once owned by the Farqharsons).  It’s a terribly small world isn’t it?

You’d have to say that the royals have their holiday home at Balmoral in rather a rough area.  Illegal traps being found on their neighbour’s place at Invercauld, an almost complete lack of Hen Harriers nesting in the general area, hardly any Peregrines to be found, just around the corner from the Angus Glens where eagles die and in a National Park famed for dead raptors and culls of Mountain Hares.  That’s a lot of killing going on and most of it is illegal and all of it is unacceptable. As I say, it seems a rough area to me.

Prince William speaks out on foreign wildlife crime, and good for him for doing that, but is silent about that which appears to be happening in his family’s local neighbourhood around Balmoral. Surely it is time for the Royal Family to speak out against wildlife crime at home?

‘Whilst animals continue to be killed by criminals, whilst whole species are poached to extinction, we will join together to ask one simple question: Whose side are you on?‘ – Prince William

Good question! Whose side are you on, Prince William?

Please sign the e-petition to ban driven grouse shooting and help animals being killed by criminals.

9 Replies to “More illegal traps – another grouse moor. Whose side are you on?”