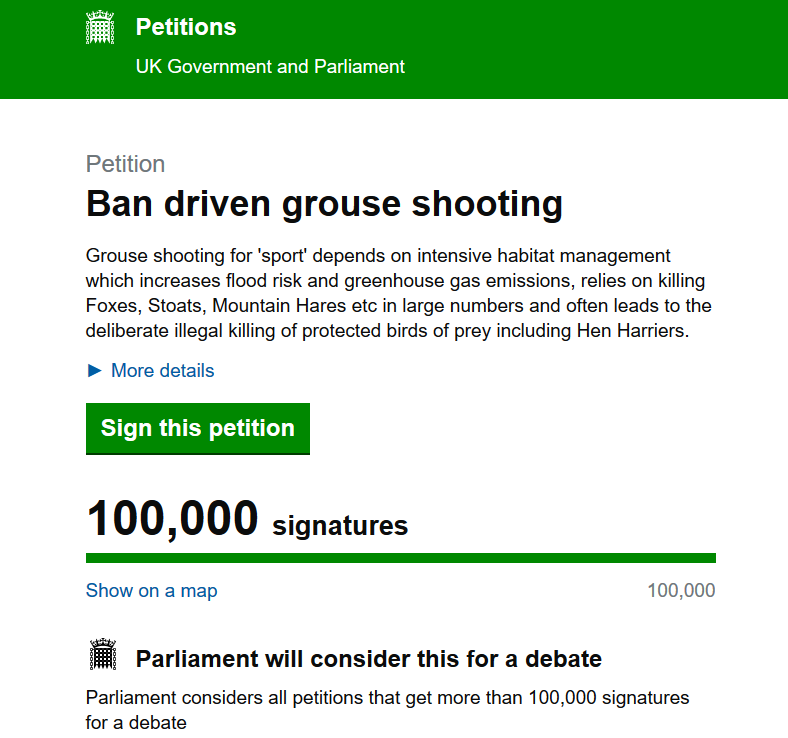 There have been 20,500+ petitions submitted during this parliament.

Of the 47 to reach 100,000 signatures – 37 have been or will be debated in parliament.  We expect to be added to that list, fingers crossed.

Please do keep promoting the e-petition to ban driven grouse shooting – more signatures would be very welcome and there are about five weeks to go.

According to the information on the petitions web page it would be very difficult to see grounds for not debating our rather super and successful e-petition.

When will the debate take place? No idea – but there is a queue and parliament is in recess so I wouldn’t expect very rapid progress.

Have we given this any thought at all – some, but we need to do more because we’ve all been a bit overwhelmed by the speed of recent events.  Keep your suggestions coming – some we have thought of, others we hadn’t but if they are good ideas we’ll certainly use them.

PS I’m not sure anyone actually got a screen shot of 100,000 signatures – the above is one of several photo-shopped images I received. It was a blur!

PPS  Am rather over-whelmed by messages of congratulation coming in by text, email, Facebook message, Twitter DM, phone calls, comments on this blog and occasionally face to face. Will try to get round to answering all of them over the next few days. But thank you all for now.