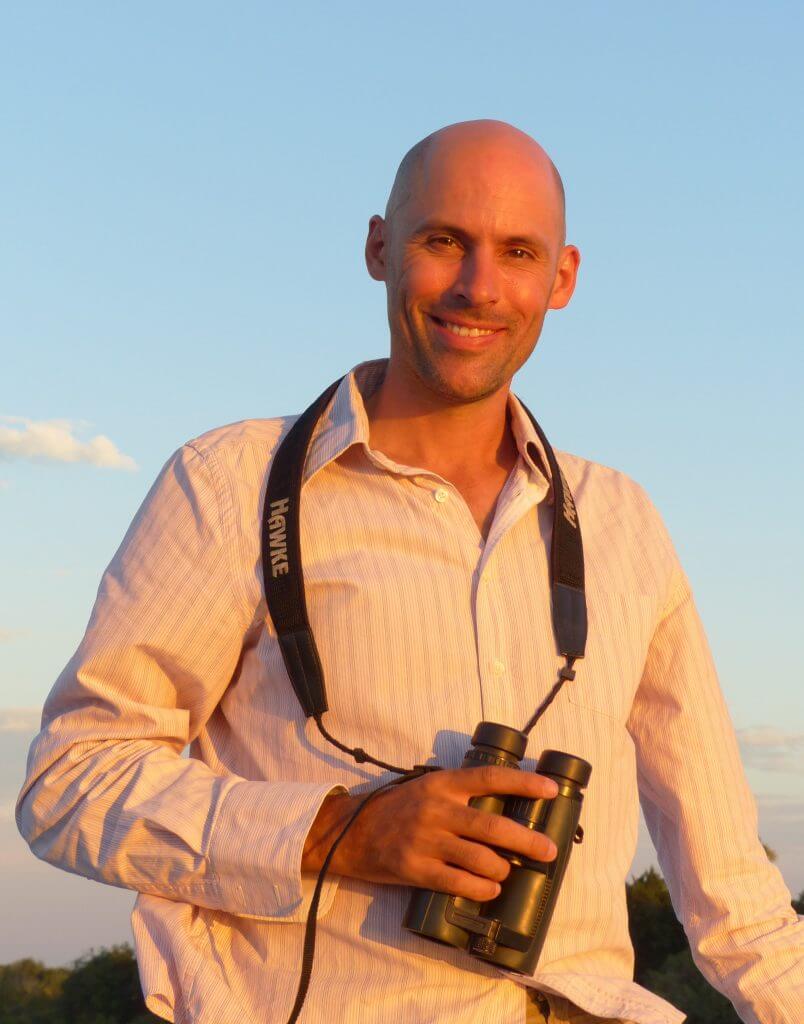 Hugh Webster is the winner of the International Category in this blog’s writing competition. A copy of Remarkable Birds is in the post to him.

Hugh writes: I recently took a break from teaching and returned to work for the Botswana Predator Conservation Trust (on twitter @BPCTcamp) as a research coordinator, living and working in the bush on the edge of Botswana’s Okavango Delta, having completed the field work for my PhD at the same field site between 2005 and 2008. The project’s focus remains very much on utilising sound scientific research to inform conservation planning, to promote coexistence with carnivores and to mitigate human wildlife conflict.

“If we do not use wildlife sustainably there will be no wildlife” argued the Zimbabwean professional hunter Theo Bronkhorst in the wake of the Cecil the lion hunting furore. Speaking as the man who led the expedition that killed Cecil the lion, his interest in promoting this oft-repeated claim of the hunting community was clear; but should we continue to blindly accept the maxim that hunters are conservationists?

While working as a researcher in 2007 for the long established Botswana Predator Conservation Trust, two big cats I knew well were shot by hunters. The first was a collared male leopard known to us as Wilbur; remarkable for his relaxed nature, he was shot in his prime by a hunter after being lured to within range of his hide using bait. This individual claimed not to have noticed the prominent radio collar fastened around Wilbur’s neck, but both he and the professional hunter escorting him left the country in a hurry shortly thereafter. The second study animal we lost was a male lion, a pride male shot on the boundary of a photographic concession, but he turned out to be the last lion shot legally in the country before President Ian Khama, a staunch conservationist, instigated a moratorium on trophy hunting which remains in place today.

Elsewhere in Africa however it remains the case that legal trophy hunting continues across hundreds of thousands of square kilometres, principally in Tanzania, Zambia, Zimbabwe, Mozambique, Namibia and South Africa. Within certain reserves such as the iconic Selous Game reserve, or more usually in adjacent game management areas, the practice of hunting enables the protection of vast areas of habitat sustaining in turn a wealth of wildlife. The hunting industry claims that it generates revenues which contribute $200 million annually to remote rural areas of Africa. Nonetheless the regularly cited financial benefits of hunting remain opaque and subject to debate. It is clear that hunting generates substantial revenues, but a 2013 report by the organisation Economists at Large, prepared for The African Lion Coalition, found that once costs including management and operating expenses had been deducted, only 3% of hunting revenues trickled down to community development.

What is clear is that without hunting the fate of these tracts of land is uncertain. Often supporting low densities of wildlife and hence being unsuitable for photo tourism, hunters claim a ban would see existing wilderness areas replaced by farms, invaded by livestock or overrun by poachers as the resident communities currently supported by hunting would, in the wake of any ban, no longer be invested in conserving wildlife.

In Botswana all commercial hunting was banned in 2014. Large tracts of marginal land, once utilised by hunting safaris but unpopular with Botswana’s ecotourists, now no longer sustain any official presence. These areas are critical for linking wildlife populations and providing spatial refuges for fugitive species, but currently lie vulnerable to incursions by bushmeat and ivory poachers. Furthermore many artificial waterholes, previously maintained by hunters in order to attract quarry species, have now been abandoned. In the long term this may be a good thing as artificial waterholes support artificial densities of wildlife, with attendant impacts on vegetation and biodiversity. In the short term however the abrupt and simultaneous cessation of water supplies at so many points has created a situation where large numbers of elephants and other wildlife are dependent on just a few over-stressed waterholes.

Kenya made hunting illegal in 1977 but since this ban has infamously witnessed a 70% decline in its wildlife. Laurence Frank, director of the Kenya-based conservation charity Living with Lions, claims this shows what happens when professional hunters are no longer around to sustain anti-poaching patrols. On the other hand it is hard to be sure that Kenya would not have seen equivalent declines even had hunting continued, given the pressures from its growing population. Indeed in Tanzania, where hunting remains legal, they have still suffered a shocking 60% decline in their elephant population in just the last five years. Craig Packer, a researcher who has tried to develop sustainable models of lion hunting observed that in Tanzania “hunters, in the absence of adequate funding and investment, are basically strip-mining the wildlife while it’s still there”.

Scientists have also expressed concerns that hunting specifically for trophies, in scientific terms “phenotype-based selective harvests”, may have undesirable evolutionary consequences. A 2003 Nature paper recorded that, in an apparent evolutionary response to sport hunting, bighorn rams exhibited declines in both body weight and horn size over time. Similar pressures have been postulated as explanation for the appearance in Africa of maneless male lions and decreasing tusk sizes in several elephant populations.

Yet Professor David Macdonald, whose lion monitoring programme in Zimbabwe knew Cecil well, still believes that “in parts of Africa, there is a very arguable case that strictly regulated lion hunting might be the best way for lions to survive”. Crucially hunting clients are willing to pay to hunt in areas lacking high densities of visible wildlife or attractive scenery, areas where ecotourism has not traditionally been viable. To fully replace hunting in these marginal areas ecotourism must diversify, perhaps offering novel experiences like tracking, foraging, walking or even health spas to complement more traditional jeep safaris.

Brent Stapelias, who first discovered that Cecil had been killed, summed up the feelings of many carnivore researchers when he expressed his personal opinion that “I don’t want to see lion hunting ever again – just because of the way lions react to it. But I think hunting as such, it can be a conservation tool.” Ironically, aged thirteen and thus likely nearing the end of his natural tenure as a pride male anyway, Cecil may have been one of the more sustainably shot lions of 2015. But as many as six hundred lions are shot by trophy hunters each year, who may pay as little as $18500 for the privilege. With fewer than 30,000 lions left in the wild hunters increasingly need to lure males out of protected areas to find suitable targets. In 2010 a research paper concluded that in certain hunting areas and even some national parks it is trophy hunting, not habitat loss or conflict with pastoralists, that is now the principal cause of lion decline. Hunting’s key failure has been to both set and then observe genuinely sustainable quotas.

Ultimately it remains true that hunting, if properly managed, could be a useful conservation tool, but equally hunters have been complacent, lazy and unthinking in their assumption that this is always the case whereas in fact very often the opposite has been true. The axiom that all hunters are conservationists is plain nonsense. Professional hunters today are businessmen, not conservationists and not ecologists; they often operate in areas for just a few years before moving on. Whenever and wherever possible we should seek to replace hunting with non-consumptive, less disruptive forms of tourism. Naturalist hunter Lionel Reynolds, appalled twenty years ago by the direction his industry was heading, urged Professor Macdonald to set up his lion research project, but today few hunting professionals share Lionel’s scruples. Hunters can still be conservationists, but unfortunately far too few really are.