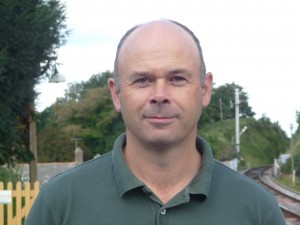 Miles King is Chief Executive of People Need Nature a new charity working to highlight the sensory, emotional and spiritual values of nature. He has worked in nature conservation for 30 years, leading the conservation work at Plantlife, The Grasslands Trust and Buglife. He has also worked for English Nature, Natural England and as a consultant. He is co-author of Arable Plants: A Field Guide (2003), and The Nature of God’s Acre (2014). He blogs at www.anewnatureblog.wordpress.com and is writing this in a personal capacity.

Is intensive farming to blame for the loss of nature from the British landscape? Guy Smith vice president of the NFU thinks not. When the finger of blame was pointed at intensive farming in the latest “state of nature” report, Smith was reported to have spluttered into his cornflakes at the very thought of it. As a winner of the Pesticide Action Network’s bee-friendly farmer of the year (albeit back in 2011 – the only year it was awarded) Smith feels entitled to claim that things are now only getting better.

Perhaps he is right. The darkest days of farm intensification were from the 50s to the 70s, after the all-out mission to grow as much food as possible during the “Great Harvest” of the Second World War, when U-Boats sunk ships bringing food to Britain from across the Empire (and beyond). The late great Oliver Rackham coined the phrase “the locust years” to describe the assault on the landscape that took place then – an assault encouraged by politicians and funded by taxpayers.

By the 1980s, the damage had been done in most places (though intensification continued in the further reaches of Britain – Dorset for example lost much species-rich grassland in the 80s). Smith’s own farm apparently had lost several hundred acres of Coastal Grazing Marsh during the 70s, though this was before his family had purchased the farm. This photo shows the extent of marsh in the 1930s.

Smith farms on the extreme east of England, near Clacton. His farm receives a lot of funding for environmental work as well as for farming. Smith received £41000 last year from Entry Level and Higher Level schemes of Environmental Stewardship, on top of the £115000 farm subsidy payment he received just for owning the land. I wanted to tell you what Smith is doing for his money, but strangely his farm is missing from the stewardship spreadsheet. According to Natural England, he does have breeding Lapwing and water voles, and there is a reintroduction of the very rare Fisher’s Estuarine moth near to or on his land.

And herein lies the problem. From Smith’s perspective things really are getting better – he’s spending a lot of time and effort and taxpayers’ money doing things for nature, so it surely must be getting better. While nature might be improving on individual farms, The data in State of Nature suggest otherwise. And of course Smith is ignoring the fact that 50 years ago those arable fields he has known all his working life were coastal grazing marsh. It’s the shifting baseline syndrome.

There’s a bigger question; what have all the billions spent on agri-environment schemes over the past 30 years actually delivered? There are some high profile good news stories – the Cirl Bunting is but one of many birds, which have benefitted from much agri-environment funding – and there are butterflies and mammals, and perhaps even a few plants that have directly benefitted. But for most of the 70,000 or so species native to the UK, we can confidently say that those agri-environment scheme billions have done little or nothing to alter their trajectories. We could be more confident if Natural England had measured the impact of agri-environment schemes on species and habitats, rather than deciding to mostly measure process ie outputs (scheme delivered) rather than outcomes (more nature).

This trajectory of decline has been going on for a long time. It’s not a recent thing. The spectrum of habitats available for species (or niches if you want to be technical) has narrowed, and continues to narrow. A recent interesting paper by Rob Fuller, Tom Williamson, Gerry Barnes and Paul Dolman at UEA charts the loss of habitats/niches that used to be provided by agriculture – before the advent of mechanization and synthetic chemicals in the 1800s. Previous farming, including the widespread use of common grazing and common-field arable farming, created a far wider range of habitats which gradually disappeared as farming became more homogenous and mechanized. Dolman and Fuller are describing a system, which created disturbance at a range of scales in both time and space. Disturbance is key to providing opportunities for many species which are now rapidly disappearing from our ever more homogenized landscapes.

We cannot go back to a time when peasants eked out a living, herding geese feeding on the village green, creating muddy pond-edges for plants, insects and amphibian. Would anyone choose to reintroduce the toxic Corncockle into wheat-fields. What future is there for nature in the farmed landscape?

Some suggest that farmland is the wrong place to be even thinking about nature and that we must look to rewilding as the answer and the future. Leaving aside the challenges of growing insect-pollinated crops without insects, will rewilding provide the places that our nature needs? Though there now appears to be a turf war going on over who has the right to define rewilding, the common ground seems to focus mostly on one or two natural processes – succession ie the growth of woody shrubs and trees; and the introduction of extinct mammals, especially predators, though some herbivores are encouraged (beavers, but not bison).

But replacing open landscapes with closed canopy woodland or scrub, whether it be in the uplands or lowlands, will not provide the conditions to sustain all, or even most, of our native wildlife. The argument goes that the Holocene wildwood which returned after the last Ice age, was mostly closed canopy and that is what we should aspire to produce again. But the Holocene wildwood had already lost the agents that created that wide spectrum of niches through disturbance, through the reverse of succession.

The Elephant in the room, as always with rewilding (or wilding if you like) discussions is …yes, the Elephant: The Straight-tusked Elephant to be exact; and the associated mega grazers of the late Pleistocene – the rhinos and giant deer.

Our fauna and flora, at least those that have survived through the Holocene until now, evolved over a period of millions, in some cases tens of millions of years. They evolved to occupy the niches created by the interaction between these megafauna, their predators, the smaller fauna of herbivores and their predators, and the flora/fungi communities that evolved during that time. Even today’s smaller elephants provide vital niches  – an African elephant (half the weight of the Straight-tusked)’ footprint creates an amazing resource for all manner of species.

This could explain why the Holocene fauna of Aurochsen, Tarpan/Przewalski’s horse, Bison etc could not create the open spaces/disturbance patches that are the habitat of so many of our native plants, fungi, lichens, mosses, invertebrates and vertebrates. They survived, clinging on, through the abnormally closed forests of the early Holocene, until Mesolithic, then Neolithic peoples started re-creating the open spaces that were there in the Eemian and previous interglacials, thank to the mega grazers and other sources of disturbance such as fire.

No doubt there was a landscape of fear created by the mega predators of the mega grazers. And it would make sense that some clearings were more temporary than others. But the idea that these animals did not create large clearings, that would last long enough to provide ample habitat for species of open sunny grassland, seems pretty implausible to me.

Of course we don’t have the opportunity to reintroduce the straight-tusked elephant or the rhinos, and even if we did, some people might be quite concerned as to whether it would be a good idea or not. But that doesn’t mean we should ignore the vital role they played in providing niches for the surviving species that we consider valuable, native or otherwise.

Our landscapes are full of the ghosts of disturbance – going back to the mega herbivores of the Eemian interglacial and previous interglacials. The older farming practices described in detail by Dolman and Fuller – which includes transhumance – the movement of stock onto summer pastures (Somerset means Summer grazing). Subsistence farming created messy corners, headlands sometimes grazed, sometimes not, mud-fringed ponds and sloughs.

As well as farming, small-scale “cottage” industries created pits and heaps, which while initially bare, slowly developed their vegetation. Peat-cutting was common on heath and moor, creating a series of different-aged pools full of wildlife. Gorse was allowed to grow on heaths, then cut to fire ovens.

The ghosts of these sources of disturbance can still be seen on downland, heath and moor.  In more recent times the Industrial Revolution created a different set of disturbances, often at much larger scales. We now value these sites as brownfield nature sites, and they support at least some of the species that would previously have been associated with the older agricultural practices, now long gone. Now it seems military activity is the only thing even remotely creating the conditions needed by nature that depends on disturbance, at least without specific conservation intent.

What can be done to provide the different levels and scales of disturbance that so much of our wildlife needs. It seems unlikely that they will return to the farmed landscape, certainly not the intensively farmed ones. Fuller and Dolman make a strong case for introducing more imaginative approaches to managing nature reserves, to incorporate practices that better reflect the types of things that happened in the long distant past. And if rewilding is going to have a real part to play in the future of nature in the UK, then one way or another, nature in its widest sense, is going to need disturbance to thrive.

This is all academic though. That trajectory of decline will continue, unless we can persuade the public to care about nature, beyond paying their RSPB or National Trust subscriptions.

41 Replies to “Guest blog – Disturbing for Nature by Miles King”