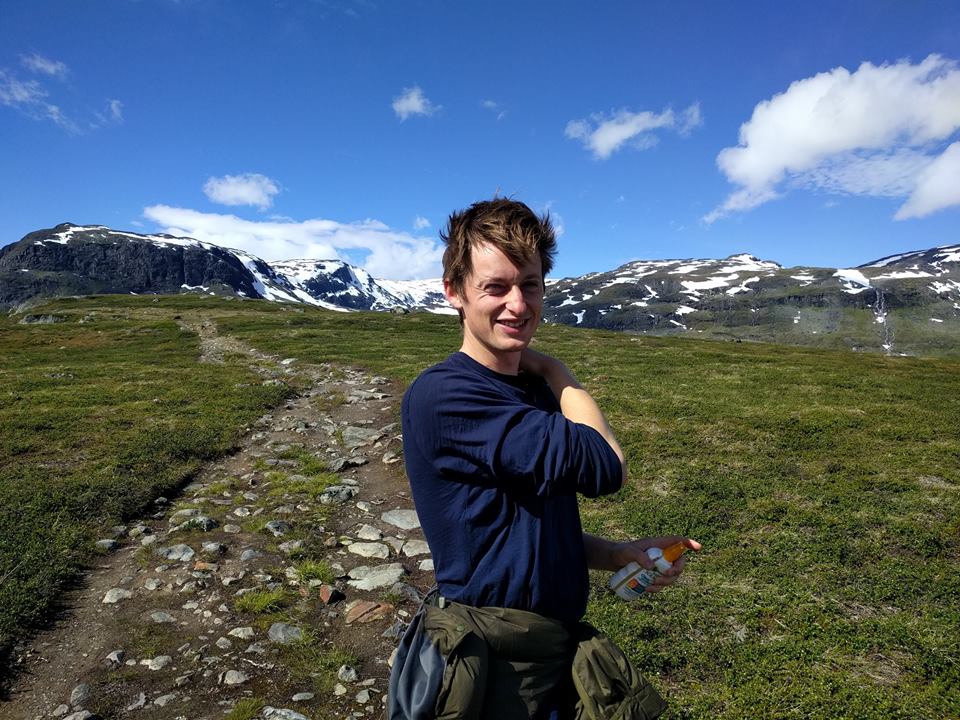 Andrew Painting, 27, is an ecologist working in the Scottish highlands. He studies human/environment relations at Aberdeen University, and occasionally writes about environmental issues.

Oscar Wilde, ‘The Decay of Lying‘

A few days ago I was out on the moor and I saw an exquisite little creature. A young merlin, with a single white speck of down on its head, flew onto a patch of purple heather close by. It was a perfect little killing machine. It was, I thought to myself, the apotheosis of natural beauty (though in truth, I don’t think I was so verbose at the time). I had a fancy camera with me, and I nearly took a picture, but decided against it. A photograph, I thought, could never do the creature justice.

Which begs the question: is it possible to reproduce the beauty of wildlife in art?

Imagine if I had taken a photo, and that photo had happened by some miracle to be the most beautiful photograph of a merlin ever taken. Even then, that photo would not be a beautiful merlin, only a beautiful picture of a merlin. It would be representation, rather than pure, untrammelled, natural beauty.

What if it were such a good photo that it was more beautiful than my merlin? What if my photo suggested a beauty in the creature that actually did not exist, as it were, in the wild? Imagine if my photo showed the merlin, but failed to show a rubbish heap just out of frame.

This is the often forgotten tension that lies at the heart of ‘wildlife art’. A work of art is not the same as the thing that it depicts. A photo of a merlin is not a merlin. A la Magritte, ceci n’est pas un Faucon émerillon.

While ‘wildlife art’ can often be beautiful, depictions of wildlife in art are the imposition of a human worldview of beauty on an inhumanly beautiful subject. When this imposition is not recognised as such it can have significant cultural and ecological repercussions.

Let me show you what I mean. One of the most famous ‘wildlife paintings’ around is Landseer’s ‘Monarch of the Glen’, completed in 1851. You know, the one from the Glenfiddich label. A wild, enormous, noble stag stands proudly against a rugged wilderness. It is a wildly popular picture of a natural, noble, sublime scene.

Queen Victoria and Prince Albert fell in love with the Scottish highlands in the 1840s. They believed they had stumbled upon a rustic utopia. Far from the madding crowds of over-civilised London, they saw in the highlands a land of sublime wilderness, sparsely inhabited by clansmen they saw as noble savages, all tartan and whisky and claymores. A land where noble pursuits like stag hunting were the order of the day. In the Queen’s own words:

‘The solitude, the romance and wild loveliness of everything here [The Trossachs], the absence of hotels and beggars, the independent simple people, who all speak Gaelic here, all make beloved Scotland the proudest, finest country in the world. Then there is that beautiful heather, which you do not see elsewhere.’

They bought Balmoral in 1852, the well-to-do followed them up to Deeside, and the ‘highland lifestyle’ took off. The Queen commissioned Edwin Landseer, a personal friend who just happened to be the most popular painter of the day, to paint their experiences – to show the world the rugged, natural beauty of the Scottish highlands. And boy did he. Landseer rattled off painting after painting of hunting scenes filled with rustic ghillies, noble animals and empty, heather-clad hills. So it was that ‘The Monarch of the Glen’ caught the world’s imagination.

The thing is though, in all honesty, it is not a great picture. Look at the stag. The proportions are out. And most importantly, a brute of that size never endured a harsh highland winter. He’s a ringer. If Keats is right, and beauty is truth, then ‘The Monarch’ is ugly as sin.

It is, to say the least, a misleading picture. By the 1850s vast tracts of Scotland were recently deforested. People had been driven from the land by centuries of clan wars, occasional fits of English oppression, Jacobite rebellions and, finally, the clearances. To this day it is possible to find the ruins of homesteads and farmhouses in otherwise empty hills that were filled first with people, then sheep, then deer, and finally with grouse. The Royals had not, in fact, stumbled on a rustic utopia, nor on a natural wilderness. They had walked into a society, and a landscape, struggling to survive.

Landseer’s stag may be noble, and the empty wilderness sublime, but these qualities are merely the picturesque masquerading as the beautiful. Indeed, George Monbiot (who is far more splenetic than my constitution allows me to be) goes so far as to say of the painting that ‘there could scarcely be a greater contrast with either the squalid reality of dispossession or of the weedy, stunted deer living there today.’

Landseer, then, did not create art, and nor did he portray natural beauty. The legacy of his paintings is, at best, a mixed bag. He put too much of himself, and his culture, into his wildlife paintings. ‘The Monarch’ screams his worldview in every brushstroke.

The ecological impact of Landseer’s work reaches into the present day. Most people think of the highlands as a natural wilderness, rather than as a landscape primarily managed to facilitate the ‘highland lifestyle’ made popular by Queen Victoria all those years ago. ‘The Monarch of the Glen’ has become a self-fulfilling prophecy. Life imitates art far more than art imitates life.

In a final, fitting twist, the painting is now owned by Diageo, which is the company that owns Glenfiddich. They own it so that they can use it for marketing purposes. As Wilde would no doubt say if he were around today, ‘life imitates marketing far more than marketing imitates life’. That is, after all, the point of marketing.

Does all this mean that depictions of wildlife in art are dishonest, or even dangerous? Of course not. ‘Wildlife art’ hangs on my walls, and my life would be infinitely poorer without it. But it is always worth remembering that ‘wildlife art’ is an expression of human creativity and never a ‘truthful’ depiction of wildlife.

Let’s return to my merlin, briefly, perched in the heather. Was she truly beautiful, or did I just think that she was? There are certainly others who would have thought of her not as beautiful, but rather as vermin. Is it the case, then, that wildlife is not inherently beautiful, but rather that we only think it is because of our own cultural prejudices? Is the natural beauty of wildlife as subjective as beauty in art?

No. Natural beauty speaks of the true nature of things. The truth of the universe is not to be found hanging in the National Museum of Scotland, courtesy of Diageo. But it can be found in the song of a blackbird sitting on an overhead wire in the forlorn suburb of a nameless town.

Note added later: On 17th November Diageo announced that it would ‘part gift’ the Monarch of the Glen to the Scottish National Gallery, which has now launched an appeal to raise four million pounds to purchase the painting. Here is a link to a pretty good article about the sale in the Financial Times (subscription) 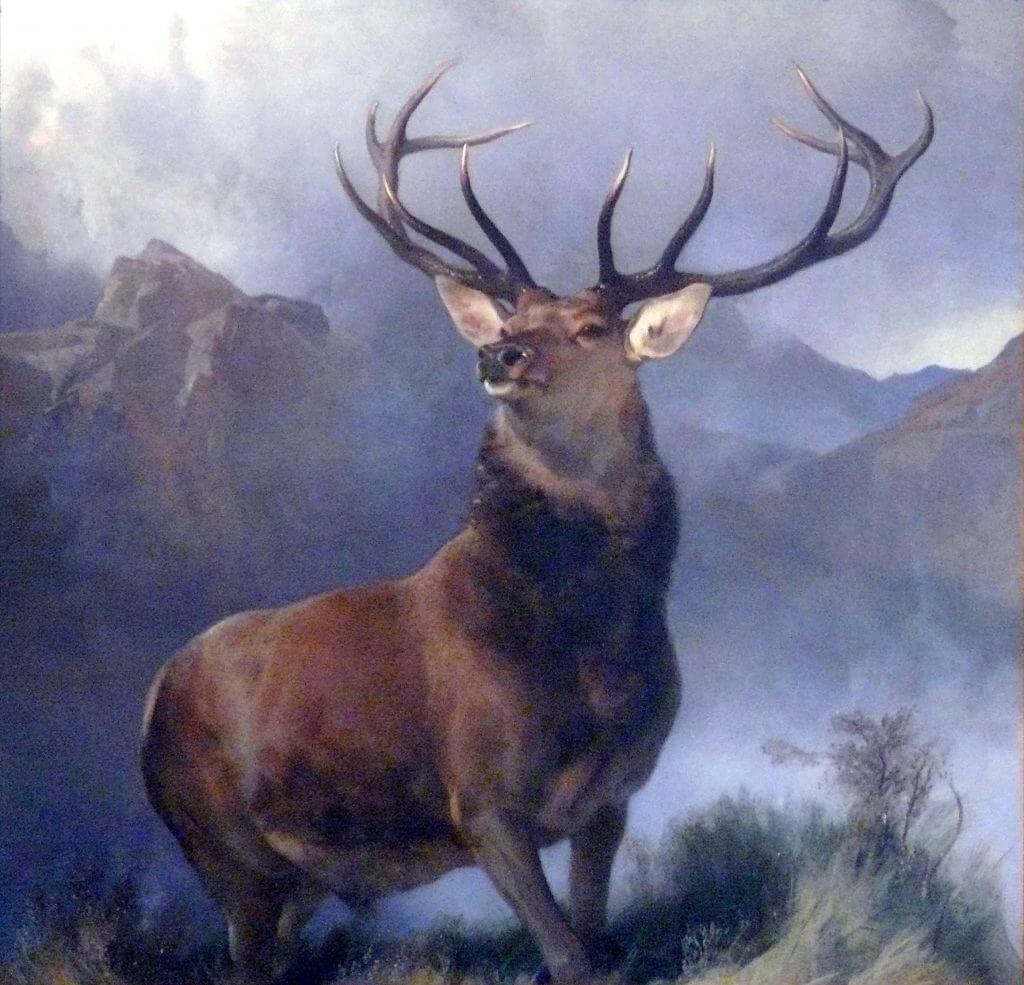 15 Replies to “Guest blog – On natural beauty, a cautionary tale by Andrew Painting.”