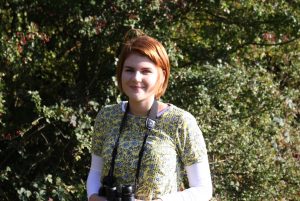 Georgia is a young naturalist and blogger. She is in her second year of A levels and plans to study zoology at university. Amongst her fascination of all wildlife, she particularly enjoys using trail cameras to capture footage of nocturnal wildlife, birding, campaigning and sharing her fascination of the natural world in the hope of inspiring others to venture outside too. One way she attempts to do this is through her blog.

Back in October, I wrote a guest blog for Mark about the Yorkshire Wildlife Trust’s (YWT) development plans for Spurn National Nature Reserve. This was following them re-submitting their planning application to the East Riding of Yorkshire Council after it was rejected the previous July. Since my guest blog was published, there’s been a tidal surge, a few more rare birds turned up and the YWT’s planning application was approved. This was despite thousands of objections, implications associated with the development and the council’s strong refusal last summer; with 9 – 0 councillors voting against on the grounds of visual impact and flood risk.

The decision has disappointed many. Over 2,800 individuals formally expressed their objection by signing petitions and sending comments to the East Riding of Yorkshire Council, compared with 600 people who supported it. Objections came from across the UK and from a wide range of folk, from birders and general naturalists to casual visitors. All of which are equally attracted to Spurn due to its unique features. From it being one the best mainland sites for the study and observation of birds, to it being one of a few remaining truly wild places in England.

The area now faces changes which could damage these features. The construction site is at the epicentre of bird activity at Spurn. It’s surrounded by valuable scrubs and bushes which provide much needed rest for exhausted migrants, located next door to the canal scrape, overlooks the Humber Estuary mudflats which see hundreds of waders feeding on, and sat on top of a meadow. All of these factors make the area extremely sensitive, along with the obvious fragility of it being located at the coast line. It’s a sorry state of affairs and the future of Spurn, and for all of its wildlife, looks uncertain.

It’s the way that the YWT processed their application and handled this situation that angers and upsets most. Those who objected and have fought against the proposal were clearly passionate and concerned about the plans. The local community suffered the brunt as instead of being consulted from day one, they were told how the development would benefit them, even though they failed to see this, had community funding taken away despite their disapproval (this was given to them by E. ON after the building of their offshore Humber Gateway windfarm) and experienced insults. When the YWT re-submitted their application back in the autumn, only minor changes were made in response to the council’s feedback in a bid to get it approved second time round.

The wealth of knowledge shared by those who live locally to Spurn or visit regularly is astonishingly rich. The Spurn Bird Observatory Trust (a YWT tenant at Spurn) objected to the proposal. They have recorded and monitored wildlife at Spurn, especially birds, daily for 70 years and have experienced its changing face. It is felt by many that this understanding of the area should have been taken into careful consideration.

The dividing line drawn by the YWT between themselves and those who visit and are passionate about the area is very disappointing, and is likely to continue to grow. No one was against improved facilities or attracting new types of visitors to Spurn but there was an overwhelming objection to the location. The YWT really couldn’t have chosen a more inappropriate site at Spurn for such a construction in terms of the disturbance that will be created to the fragile environment and the damage that would be created to the very same landscape that attracts folk to Spurn, contradicting the YWT’s very own intentions. Other options and areas that could have provided equal opportunities for the YWT and visitors were available but discounted.

As the YWT’s initial application was rejected the first time round, they re-submitted a second application. This time, as part of the decision process, both the applicant (the YWT) and the objectors were given the opportunity to give a 30-minute presentation to those councillors who would be voting. Out of those speaking from the YWT was a member of staff who spoke about how the development could contribute to the local economy and tourism. This was a key argument used by the YWT in their campaign but seems at odds with any morals of a conservation body to unnecessarily damage valuable habitat in order to achieve this.

I’ve been getting myself involved with campaigning and conservation matters for a few years now but I’m still fairly new to it all. When I speak out, I’m standing up for the protection of our natural environment and for future generations. Therefore, when I spoke to councillors on behalf of those objecting, along with two others, it felt strange. When involved in campaigns, it is usually alongside such NGOs. However, the tone of concern in my voice when I spoke to councillors could have been mistaken for me talking about the risks our environment faces at the moment. Although the YWT have done positive work in the county, their intent of building a visitor centre on Triangle Field goes against their wildlife and environmental pledges.

When organisations who we support make mistakes we mustn’t be afraid to speak out and tell them. Unfortunately, the YWT didn’t listen, and as a result they have lost a great deal of respect amongst their members and the public. To have seen the very thing I campaign against take over a place which brings me so much happiness, as it does for many others, is deeply troubling. However, in spite of them, Spurn will survive. Enough people care and are concerned about the area to not let any vandalism do lasting damage.