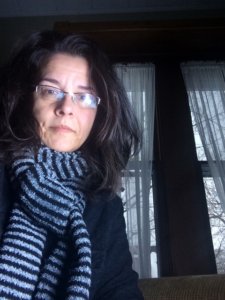 Laura Kammermeier is a writer, birder, environmentalist, and communications consultant. She is also a news junkie, a defender of freedom, and an activist. She’s really teed off right now. She lives in New York state.

Laura can be found on the web at MyDigitalNature.com and NatureTravelNetwork.com.

What will you do as Rome burns?

Everything you heard is true. Not unlike those that determined your Brexit fate, the lunatics are now running the American asylum.

Defying all that is (was?) great and good about this country, a portion of the American electorate has installed a malignant narcissist as the 45th President of the United States.  But how, you ask? The reasons are long and complex and amount to this: while we were busy reading novels, watching birds, and solving actual world problems, a dark form of nationalism was incubating in Petri-councils across the country. All it took was extreme conniving of the extreme right and a massive inoculation of Trump (he has the best ratings!) to turn it into a raging, nationwide infection. Sad!

So while we “normal” Americans gasp, cough, and wheeze, exhausted from our efforts to cure ourselves, the infection spreads its way into federal policy, lower offices of government and onto the street and subways, where legal citizens are badgered and bullied for looking, acting, or thinking differently. Suddenly, even an iota of informed thought places one into the “elite” class – subject to the tyranny of petty Trumpets.

We are in the acute stages of this infection and it won’t get better soon.  Every day, an ignorant man-child sits in luxury bathrobe at The Resolute Desk (The Resolute!) aiming mucous-filled slingshots at time-honored institutions, policies, and people while trying to replace truth with “alternate facts” that push the administration’s “shock and awe” agenda.

There will be many casualties of this administration. But the one Mark invited me to speak about was the environment, which has already taken a major hit and lay on a gurney, heading if not to the morgue, then for reconstructive surgery.

And in the background of all this, a fight to hand over federal public lands (including those that protect threatened and endangered bird species such as the Gunnison Sage Grouse) to the states (who want to sell oil and gas rights on them), festers.

Now, while Democrats don’t expect this “Destroy the EPA” bill to get anywhere the trouble is that the infection is spreading and one absurd folly after another is befalling your American brothers and sisters.

Eh. Who needs the environment when you can live in a bubble of small-minded greed, gleefully bouncing off other putrid bubbles as you rise, rise, rise into the political stratosphere! But know this, one day, when they least expect it, their bubbles will POP! And they will fall back to the earth leaving nothing but a wet smudge where their relevance used to be.

I can’t tell you how any of this shakes out, but I do want to leave you with two messages.

The first is:  WAKE UP and DO SOMETHING (at home)!

If it can happen here, it can happen anywhere. Your Brexit scenario, combined with the Farage-Trumpet love-fest, reveals a broader, existential threat to basic humanity, kindness, and informed, intelligent action and signs are it’s spreading beyond both our borders.

While we feed our kids and take them to soccer practice, people with narrow views and nefarious intent are organizing, synthesizing, codifying, and electrifying their base.

A hard lesson here is that picking your system of government once doesn’t mean you get to sit on the sidelines while it matures. Get out, run for office, organize like-minded groups, and SHOW UP at politician’s offices and carry signs. STAND UP FOR THE ENVIRONMENT like you never have before.

And stop with the Facebook slacktivism! While you sit on your high horse of informed glory, other people are out using two-syllable words to change the mindset of others.

“The principle & which is quite true in itself & that in the big lie there is always a certain force of credibility; because the broad masses of a nation are always more easily corrupted in the deeper strata of their emotional nature than consciously or voluntarily.” – Adolf Hitler, Mein Kampf.

The second message is:  WE WILL SURVIVE (with a little help from our friends)

The American government was built on a system of checks and balances. That means Trump alone can’t ruin America, but his sycophants and the obedience of Republican henchmen will rattle the hell out of us. Trump doesn’t answer to us but members of Congress do, and we can and will vote them out of office. Americans are madder than hell, and our people are organizing more than ever.

This crisis has many bright spots:

Yes, Americans are reeling in the blow-by-blow as policy shifts and changes, implodes and mutilates, but we will emerge a better nation as our system of government and our checks and balances are tested and refined.

A writer with The Atlantic, leaves us with a reminder about our uncertain future.

There is nothing great about the America that Trump thinks he is going to make; but in the end, it is the greatness of America that will stop him —  Eliot A Cohen

But meanwhile, do your American friends a favor and buy us a pint and an hour of therapy. And shore up your own ship because we can’t fight insanity from both sides.

We need each other.

28 Replies to “Guest blog – What will you do as Rome burns? by Laura Kammermeier”