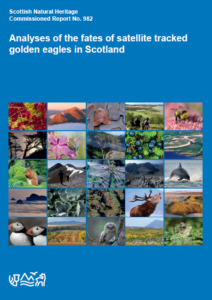 Cabinet Secretary, Roseanna Cunningham, has come to the end of her tether with grouse moor managers in Scotland – that much is clear.  Good for her!

Answering questions in the Scottish parliament this afternoon she announced the publication of the review of ‘the disappeared’ satellite-tagged Golden Eagles (see here) but also a raft of measures which are mostly positive:

‘The findings of this research are deeply concerning and will give rise to legitimate concerns that high numbers of golden eagles, and other birds of prey, continue to be killed in Scotland each year. There is every reason to believe that similar levels of persecution affect untagged golden eagles, as well as those we are able to track via satellite tags.

We have already targeted wildlife criminals, and those who sanction such crimes, by introducing measures such as vicarious liability and restrictions on the use of general licences. But Scottish Ministers have always said they would go further if required – and that is what I am doing today.

The continued killing of protected species of birds of prey damages the reputation of law-abiding gamekeepers, landowners and indeed the country as a whole. Those who carry out these crimes do so in defiance of the will of Parliament, the people, and their own peers. That must end.

This report identifies specific problem areas which will allow Police Scotland to adopt a targeted approach and I would also encourage members of the public to report any suspicious activity to the police.

The range of measures we will introduce over the longer-term will build on the progress that we have made to-date and tackle outdated practices and attitudes. By looking at ways of strengthening the legal protection for birds or prey we are sending out a strong message that Scotland’s wildlife is for everyone to enjoy – not for criminals to destroy for their own ends.‘.

Excellent news! Well done Ms Cunningham!  I’m sure your colleague Fergus Ewing has warmly congratulated you for this move.

More on this later. I wonder what the landowners and SGA have to say on this shock move.

Can you imagine Therese Coffey  taking such a step in England where things are just as bad (arguably worse)? No, nor me.

If you care about the environment, vote for anyone who can stop the election of a Tory MP on 8 June.