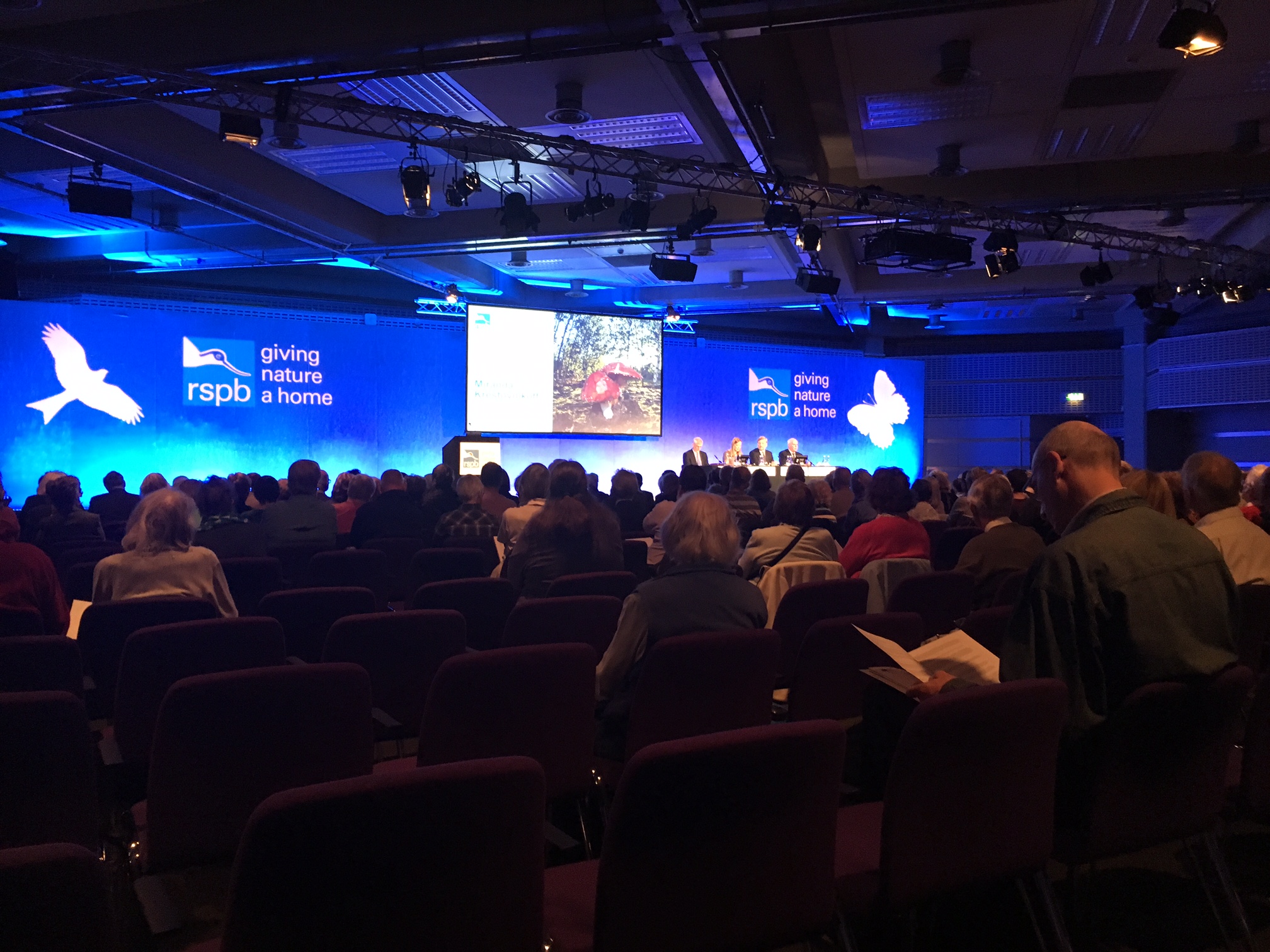 If the Conservative Party wants to know how to run an event then they could ask the RSPB.  I’m not sure what would count as the Leader’s speech but none of Miranda Krestovnikoff (President), Steve Ormerod (outgoing Chair) or Mike Clarke (Chief Exec) did any coughing or were handed P45s, and no letters fell out of the RSPB’s name or strapline.

It was all very smooth and professional – and for the first time you could have watched the AGM from the comfort of your own home through live streaming.  If any reader of this blog did do that, please let us know in a comment how it was for you.

There were several moving moments but two are worth noting here. The AGM is when the RSPB presents its RSPB Medal and this year the medal went to the late Dick Potts as reported here back in March. Olga Potts received the Medal yesterday and said a few apt and well-chosen words.

Also, Stuart Housden, known to some as The Monarch of the Glen for his 23 years as the RSPB’s Director Scotland (which followed 17 years at The Lodge) is retiring – not a word often used about Stuart – and he gave a very good talk about RSPB achievements in Scotland.  Stuart has been a stalwart of the RSPB for decades – but I intend to say more about that next week.

Stuart also had the task of responding to a question from the floor asked by GWCT trustee Philip Astor.  I had a little chat with Philip about pixelated faces but he asked the RSPB about pesky Foxes and why the RSPB had stopped killing them at Abernethy. I didn’t know the RSPB had stopped killing Foxes and I was interested to hear why since I played a role in increasing the Fox death toll at Abernethy because back then, a long time ago, the evidence seemed to point to this helping Capercaillie (although I remember it as being a bit marginal even then).  Stuart said that there are quite a few ‘sporting’ estates which kill lots of Foxes which have lost their Capercaillies and quite a few estates without Fox control which have kept theirs – that’s quite interesting isn’t it?  And maybe Foxes keep the Pine Martens under control a bit and we know they are another predator of Capercaillies.  Interesting – and so the RSPB is ceasing Fox control at Abernethy for three years to see what happens. Sounds very sensible to me.

The RSPB keeps talking about the defence of the Nature Directives as a massive success which is a bit odd really but does show that RSPB approves of people signing petitions to get politicians to do the right thing – here’s one that is worth considering.  It’s odd because, of course, we are leaving the EU and the Directives behind us and it remains to be seen whether future governments will properly maintain the levels of protection in the UK or start pretty quickly to dismantle them.  Apparently 60,000 RSPB members signed the petition to save the Nature Directives, I wonder how many signed this one to save our uplands – maybe the same number do you think?

I paid more attention than usual to the Treasurer’s report (by Graeme Wallace). Times are hard (not crushingly hard as the RSPB spent just under £100m on its charitable purposes last year), but hard enough given the scale of the task.  The RSPB Pension Scheme has closed to staff but its deficit remains and increased last year.  Grant income went down by £4m and is expected to decrease further in future years as we do that Brexit thing and as austerity continues in the public sector and for individuals. And whilst legacies are now at an eye-watering £34m per annum that was helped by a couple of big ones that cannot be relied upon every year.  The RSPB has financial reserves of £33m which is a lot of money, but only enough to run the organisation if all other money suddenly ceased coming in (which, of course it won’t) for 16 weeks.  Those financial reserves look likely to be called upon over the next few years for the pension fund hole and to replace grant income – but it looks likely that there will be further cuts to RSPB’s conservation programme ahead.  And if the RSPB is feeling the pinch – think of other charities which may be even more dependent on grants…

And then on top of that, changes to legislation mean that lots of organisations will be asking you to opt in to receiving communications from them – being a member of the RSPB will soon no longer mean that you have agreed that the RSPB can contact you.  Jo Coker gave a very clear talk about this aspect and I rushed home to fill in the form online (I said yes to postal and email contacts) and I suggest you have a look at it too.  You’ll find lots of other charities asking you similar questions over the next few months.

So it was a good event as always – lots of friends there including many RSPB staff and many readers of this blog too.  I didn’t see anyone who looked like the Conservative Party taking notes but Songbird Survival’s Keith Cowieson was present and he has a lot to learn too. 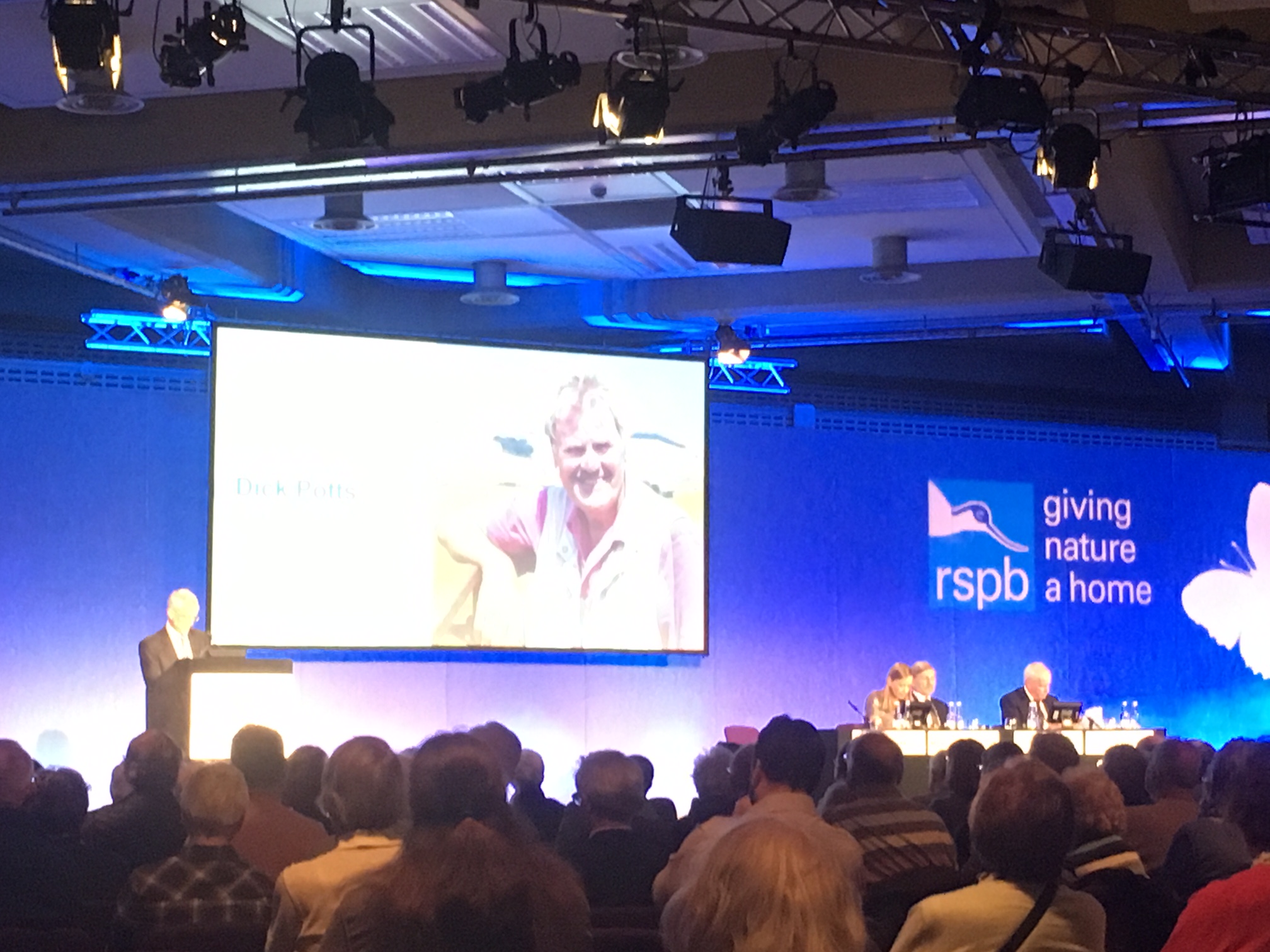