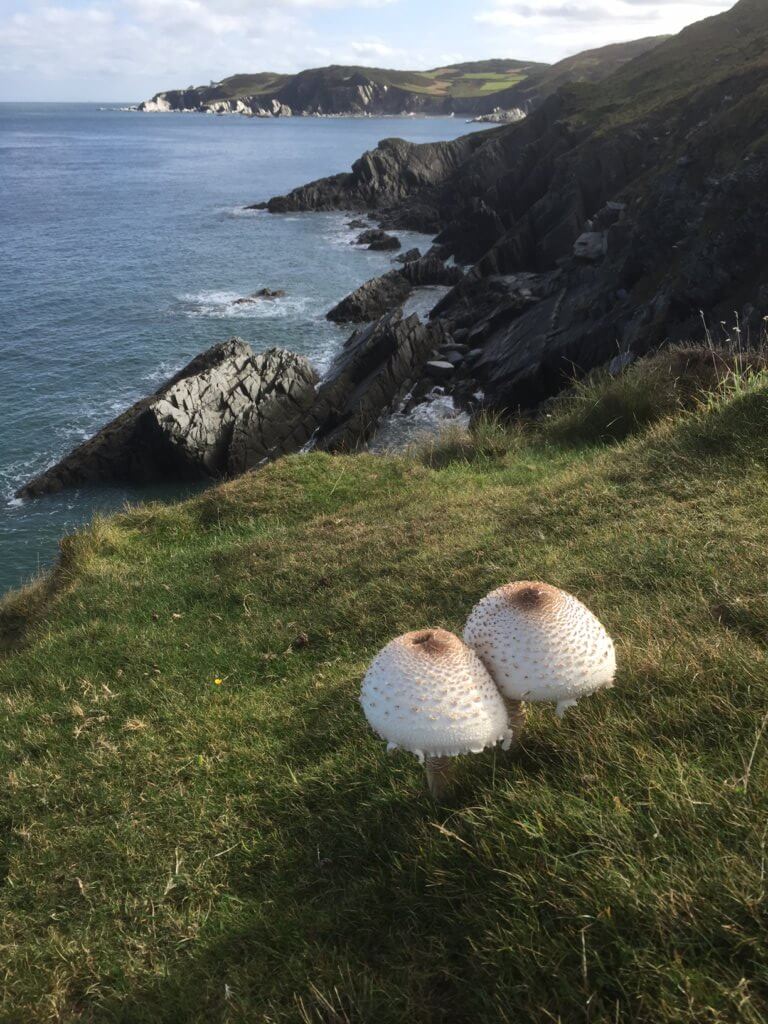 I’m normally fairly relaxed about the idea of collecting small numbers of fungi for the pot. The structures we see above ground are the fruiting bodies produced by the main mass of the fungi, safely tucked away below ground. The analogy is not perfect but it’s not too dissimilar to picking blackberries – taking a few of the reproductive organs but leaving the main plant intact. Of course, there are other creatures that make good use of berries and fungi so hoovering up vast numbers is not on, but taking a few seems reasonable enough to me.

The Parasol is a little more tricky. It’s partly the fact that it tends to grow in wide open, often publicly accessible, spaces, such as here on cliff-top grassland in north Devon – close to the well-used south-west coastal path. They often reach an impressive size, sometimes approaching dinner-plate proportions and on a tall stem so that the caps are thrust above the surrounding grasses and visible from miles around. When they grow in numbers (as they often do) they make for a very impressive sight, and there-in lies the problem. Is it right for one person to diminish a spectacle that others might enjoy?

My answer varies, depending broadly on hunger levels. I will sometimes take the odd one but I try to leave the troop largely intact. If I take two young ones out of 40 then I don’t feel too bad, though, of course, it would only take 19 like-minded people to clear the crop completely. As I said, these things are tricky.

My culinary skills don’t extend much beyond ‘putting things on toast’ so these are perfect – they don’t even need to be cut up if you can find a nice slice-of-bread sized specimen, and they have a strong, nutty flavour.

This is a species that does have some nasty look-alikes though none grow to anywhere near the same size – as always, check carefully, and if in any doubt, stick to picking only the largest individuals.