Dr Therese Coffey is the junior minister at Defra. When Gavin Gamble’s e-petition in favour of banning driven grouse shooting passes 10,000 signatures (and it stands at over 9300) then Dr Coffey will need to sign off a government response.

In order that she does not make Defra look even more foolish than they do already I am providing a reading list for the minister to inform her response.

This very interesting blog appeared a few days ago, written by the Wildlife Manager at Glen Tanar, Colin McClean.  I’ve only just come across it and I recommend it as a read for Dr Coffey and others even though it is set in the Scottish context. As others have noted, the last paragraph is quite telling (but do read the whole piece):

‘But amidst the chat and the income, the debate surrounding grouse shooting rages on. Jobs and economy on one side, raptor persecution on the other. Political scrutiny is now intense. For me there is little political threat to grouse shooting provided the sector obeys the law of the land. There are far too many jobs involved for politicians to take action lightly. However obeying the law is a must and this remains a challenge for some. The recent review of satellite tagging of golden eagles shows an unambiguous pattern of regular disappearances above grouse moors when they rarely disappear over anywhere else. For me its not the RSPB or campaigners like Chris Packham or Mark Avery who threaten grouse shooting. They are just campaigning for the law to be obeyed. The threat to grouse shooting comes from those who refuse to abide by the law and continue to persecute raptors. If a ban ever does come about, then the responsibility for losing all the traditions, all the economy and all the jobs will lie entirely at their door.‘. 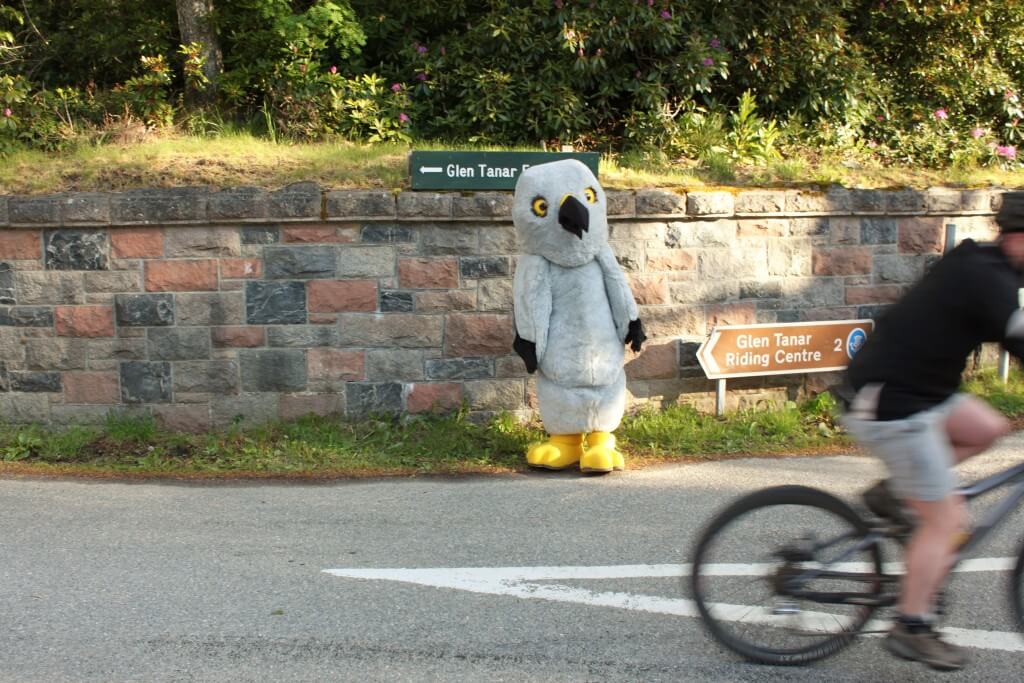 I’ve written about Glen Tanar before both on this blog (here, here and here), and in The Field in 2011 as follows:

‘My Scottish destination was Glen Tanar, where I met Colin McClean the Wildlife Manager for the Glen Tanar Estate, and I had come to Glen Tanar because it may show the way to find solutions to the harrier/grouse conflict. Here, Colin and his team are doing much of what the more high-profile demonstration study at Langholm (the Langholm II study) is attempting to do too.

Colin told me Glen Tanar has been in the same family’s ownership for over a century. There are about 10 days walked up shooting a year and in the last couple of years a day each of driven grouse shooting too. But red grouse provide just one of the Estate’s income streams, deer stalking and fishing form two others alongside forestry, holiday homes and estate safaris.

Glen Tanar is one of the very few grouse moors in the UK which hosts nesting hen harriers – just the one pair but that’s one pair more than almost any other grouse moor in the country – so I was keen to hear Colin’s experiences.

The hen harriers are fed artificially at Glen Tanar – and eat a shoulder of venison a day. I was expecting Colin to talk about the difficulty of fitting harrier-feeding into the Estate’s routine but he was pretty relaxed about it – he feeds the harriers himself five days a week so he knows what it entails and he said that he was ‘Desperately keen to find compromises’ on this issue.

Colin is also looking at whether he could make money out of harriers – by charging photographers a fee to photograph the birds at their feeding site – this really is embracing the harriers as a potential asset as well as a problem for the moorland manager.

We speculated about why there weren’t more harriers on nearby estates and why there aren’t more harriers at Glen Tanar. Perhaps the presence of golden eagles in the area limits harrier numbers and the fact that Colin described Glen Tanar as almost a heather monoculture reminded me that meadow pipit numbers are lower on all-heather moors and it’s the meadow pipit numbers which attract harriers to moors in the first place.

I wonder whether we are all worrying too much about there being more Langholms – after all the RSPB nature reserves at Geltsdale and Abernethy don’t have harriers nesting these days and nobody thinks that the RSPB is bumping off hen harriers so there must be precious few around these days in grouse moor areas. There never was a place so full of hen harriers as Langholm during the project there, and maybe there never will be again.

There was something else that Colin said that struck home with me. I’d heard it said many times before, I’d even heard it from a vocal ex-gamekeeper earlier that day, but it was when Colin said it that I really listened. He said that the one thing that really annoyed him was when all gamekeepers were tarred with the same brush as being the bad guys – because that included him and he was doing his best. I guess he meant the RSPB rather than other nature conservation organisations because my former employer is the most outspoken organisation on this subject, and Colin might well have had me, personally, in mind as I’ve done my share of speaking out on this subject, but hearing it from him in the estate office at Glen Tanar made me realise how it must feel for him, one of the good guys, to hear words which seem to damn all without exception. Fair point!

As I drove back south, through Perth and around the Edinburgh bypass, I was still thinking of what needs to be done by both sides to solve this tricky problem. I wondered whether diversionary feeding, which seems to work at both Glen Tanar and, rumour has it, at Langholm too, might be the ‘win-win’ tasty sandwich filling between two bits of less tasty bread.

The bottom slice of bread, coming first, could be a restatement from shooting organisations that illegal killing of hen harriers happens, that it is too often done by members of the shooting community and that those organisations will work to reduce the incidence of illegal raptor-killing. Such a statement, if worded well, would remove a lot of the hypocrisy from the discussion and would mean there was no going back whatever happened next. And I believe that such a statement would be seen as a significant move by raptor enthusiasts who, a bit like Colin, don’t like to be told that they are making it all up whenever they mention raptor persecution.

Voluntary diversionary feeding would be the filling in the sandwich which would help grouse moors cope with low densities of hen harriers, like Glen Tanar does, and like many moors did in the old days. But another slice of bread is needed to top off the sandwich – what happens if on some moors, harrier numbers rocketted like at Langholm?

The top slice of bread would be that conservation organisations would agree a safety net for the grouse moor manager who did the right thing and allowed hen harriers to set up home on his grouse moor. This would involve some form of quota system where harrier numbers could be capped (perhaps by egg-pricking or translocation of young harriers) on individual moors if their numbers went ‘too high’. Agreeing the quota figure would be difficult and such a concession would not be easy for conservationists to make, and would require some clever brainwork to be made legal, but could lead to the atmosphere of trust that will be necessary to move things on. And, of course, it’s only if persecution decreases, and hen harrier numbers rise, that quotas become even remotely relevant.

Like the A68, the road ahead on the issue of harriers and grouse is a bit dangerous for all concerned and the way ahead is often not that clear. But it must be worth the journey. By the time I crossed the Scottish/English border, and overtook a timber lorry on the downhill, my thoughts were racing ahead to a time when I might more often see a hen harrier adding its beauty to the moorland scene surrounding the road home.‘

Well, that was six years ago. It seems like an age but, to be fair, I have often thought of Glen Tanar in the interim. Glen Tanar doesn’t have Hen Harriers these days – there just aren’t enough around because of illegal persecution.

It is worth pointing out that Glen Tanar is very different from most grouse moors, and particularly most English grouse moors. Glen Tanar is a diversified estate with fishing, forestry, tourism as well as shooting to market. As Colin McClean writes ‘Glen Tanar Estate has a diverse, multi-objective economy and grouse shooting is a relatively small part of the picture. Consequently we are about as unintensive a grouse moor as you can get. We control foxes and crows for a range of conservation objectives, with capercaillie protection being the most important. This undoubtedly benefits grouse but no other predator is ever killed here.’. Many English grouse moors have backed themselves into a dead end by intensifying the management of their moors, underpinned by widespread raptor persecution, so that they can only make money at the moment if grouse bags are high. There’s a lot of money at stake but those estates have made bad business decisions in my opinion.  They’ll lose a packet if raptor persecution ceases – well, that’s tough! Criminality has to end.

We haven’t seen the public mea culpa from the shooting industry that I wrote in The Field was necessary to remove the hypocrisy from discussions and so views have hardened. My views have hardened – that’s for sure. Many of us, and it seems that Colin McClean is one of them, have lost any sympathy and all patience with the wildlife criminals. Colin calls on them to reform – I have lost any expectation that they will but I hope he is right.

The grouse shooters have felt that with the likes of Richard Benyon and Rory Stewart as Defra ministers they have had the pressure taken off them south of the Border whilst the pressure increases thanks to the SNP north of it.  Therese Coffey needs to reposition Defra on this issue and her response to Gavin Gamble’s e-petition will demonstrate whether the message is getting through or not.