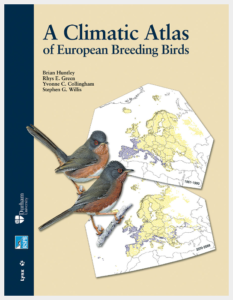 Last week I was thinking a bit about climate change and birds and thought I’d had a good idea. And I had had a good idea – it’s just that others had had it too and published a paper on it two years ago!

The good idea was to look at the ‘envisaged potential’ bird distributions which were modelled in the Climatic Atlas of European Breeding Birds and see whether they were supported by recent bird survey data from across Europe.  Are species which were envisaged to increase their breeding ranges actually increasing in those places and are those that were envisaged to lose distribution actually declining in numbers in those places?

Well, this was looked at in a paper in Science a couple of years ago. I’ve looked at the paper and it”s very interesting but it’s behind a paywall, and although I think (their system is very complicated!) I’ve asked Science for permission to use one of their figures from the paper I haven’t had a reply so I’ll just describe it in words!

So, what did they find? On average, populations of species that ought to go up are approximately stable (not increasing) but populations that ought to go down go down a lot. There is a real difference across all species and countries between species predicted to do well and those predicted to do badly – that’s quite impressive. In fact it’s very impressive considering all the other things that are going on.

But the researchers were a lot more ambitious and cleverer than that! They repeated the analysis for birds in North America (this was a massive undertaking – I’m very impressed) and found that populations of species that ought to go up,  go up a lot and populations that ought to go down are approximately stable. So again, there is a real difference in the way that envisaged increasers and envisaged decreasers actually behave and those differences are in line with actual climate change.

But the researchers did something even cleverer. If you plot the ratio of the ought-to-go-up index to the ought-to-go-down index against time, the results for USA and Europe look remarkably similar. If the DIFFERENCE between the two groups of species is due to climate change, this similarity of the index ratio plots between USA and Europe is exactly what you’d expect, because warming has occurred to a similar extent on both continents . That’s another line of evidence in favour of these trends being driven by climate change.

The results imply that things other than climate are, on average, worse for birds in Europe than they are in the USA.  Interesting.

The Science paper is Consistent response of bird populations to climate change on two continents by Stephens and an awful lot of al.s