The focus on climate change in the SUKB report published today is a very useful stock-check.

It has prompted me to go back and look at one of my ‘favourite’ books, published 10 years ago, A Climatic Atlas of European Breeding Birds by Rhys Green of the RSPB and Brian Huntley, Yvonne Collingham and Stephen Willis of Durham University.  The book is a bunch of maps; for each species there is a map of its ‘current’ European breeding distribution and a map of its ‘potential’ geographic distribution. 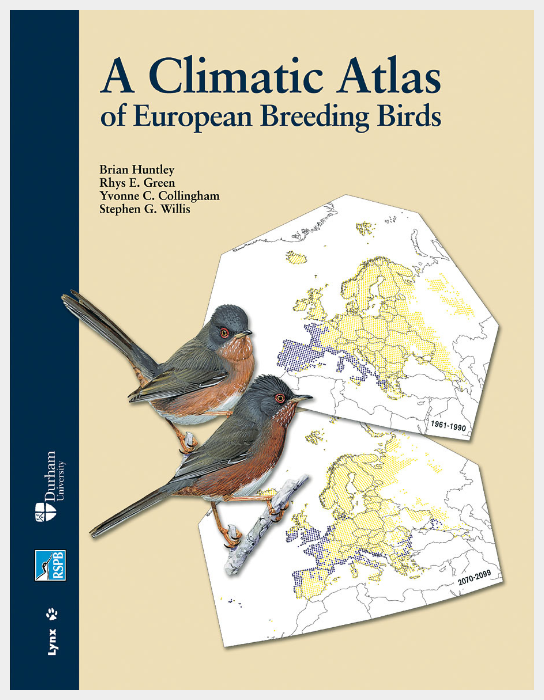 You can get an idea of the two types of maps from the example of the Dartford Warbler on the book’s cover above. The top map is (well, it isn’t exactly, but this simplification is helpful  – read the book for all technical details) where Dartford Warblers actually live and the bottom map is where they could live, all other things being equal, under a reasonable prediction of the future climate in 2080 or so.

Look at the two maps for Dartford Warbler and you see that for the UK and Ireland it suggests a spread in range to the latitude of North Wales by 2080. Obviously, you and I know that Dartford Warblers tend to live in heathery places and so there won’t be Dartford Warblers everywhere, but potentially in many more places than the data on which the analysis was based – the book was published in 2007 and the bird data come from periods (the 1960s to 1990s) quite a while before then.

It’s an interesting, nay! a fascinating analysis, and at the time it was pretty ground-breaking.

There are two points to make about the Dartford Warbler example above – and the Dartford Warbler was an excellent choice for the cover. First, our gain is everywhere else’s loss. The Dartford Warbler’s range under the future climate scenario is envisaged as being smaller – fewer blue dots on the lower map than the upper one.  Being on the north of the range of this species we see increases but to the south there are big losses.  If you are a species whose European range is northerly and you live in Scotland then you don’t have many places to move if you have to go north to survive – the Faeroes and Iceland, and not many stepping stones to get to them either.

The second point is that the UK range of the Dartford Warbler envisaged (not predicted, but imagined to be possible) for the end of this century has already come true! Dartford Warblers breed in many places in N Wales already.  The Dartfords aren’t coming – they’ve already arrived and about six decades early!

Now, the SUKB report and commentary sent me back to this book to check the species which were highlighted as increasing or decreasing (possibly)in response to climate change in the recent observations summarised in the report to see what the Climatic Atlas envisaged for them.

Of the six species mentioned in the press release as benefitting in the UK from climate change (Little Bittern, Zitting Cisticola, Mediterranean Gull, Hobby, Little Egret and Quail) all but Med Gull were envisaged as climate change gainers for the UK in the Climatic Atlas.  We can ‘let off’ the authors of the Climatic Atlas for Med Gull as its initial geographic distribution, on which the modelling was based, was clumped and not a great fit to any climate model.

And of the four species mentioned as losing out in the UK because of  climate change (Dotterel, Whimbrel, Common Scoter and Slavonian Grebe) all were recognised as potential UK losers in the Climatic Atlas.

So, today’s report provides further general support for an analysis of the potential impacts of climate change on European birds  which was published a decade ago, done a while before that, and based on avian distribution data from around 40 years ago. Interesting! I wonder how much the data from Spain, Finland and Greece, to pick three other corners of Europe, would show similar support for the Climatic Atlas – or maybe they’d show little support at all. It would be interesting to know.

And, of course, if there are, generally speaking, reasons for taking those Climatic Atlas maps fairly seriously, what other things might we expect to see in UK breeding birds?

Well, here are a few examples, but I suggest that you get a copy of the book from a library and have a thumb through it over the Christmas period (or you could buy it, but it’s not cheap, and you have to be quite keen on maps!).

Red Grouse – sell your grouse moor in the north of England!

Ring Ousel – only left in Scotland.

Subalpine Warbler, Sardinian Warbler and Rock Bunting – look out for them all on the south coast of England in a few decades time?

Serin – we should be overrun by them eventually.

We’ll see, well some of you will because I have no firm plans for 2080, but I reckon the bird distributions in 20 years time will be very different from those of 20 years ago, and we can see them changing every year.

4 Replies to “Climate and UK birds”