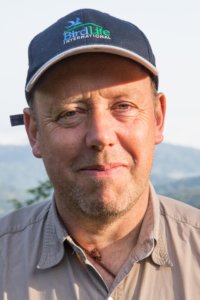 Richard Grimmett is responsible for overseeing BirdLife International’s conservation programmes for species, flyways, forests, marine and invasive species, as well as BirdLife’s work with the corporate sector. He has been with BirdLife (and its predecessor the International Council for Bird Preservation) since 1985. He is a keen birder as well as the author of a number of field guides to the birds of South Asia.

Millions of birds slaughtered each year

Today a review led by the BirdLife partnership examining the scale and scope of illegal killing and taking of birds in Northern Europe, Central Europe and the Caucasus (Brochet et al. 2017) has been published online in Bird Conservation International (see also ‘The Killing 2.0’ layman’s report). This paper follows on from Brochet et al. (2016) which revealed the shocking extent of bird crime taking place in the Mediterranean (see also ‘The Killing’ layman’s report). Next year BirdLife plans to publish a study of illegal killing and taking in the Arabian Peninsula and Persian Gulf to add to our understanding of this issue in the African-Eurasian flyway as a whole. .

Anyone who thought illegal killing was purely a Mediterranean problem will be alarmed by the finding that it is prevalent throughout Northern and Central Europe and the Caucasus. While the overall numbers of birds illegally killed are lower than in the Mediterranean, this first attempt to quantify the issue estimates that 0.4-2.1 million birds may be killed illegally or taken alive each year in Northern and Central Europe and the Caucasus. Of the worst 20 ‘blackspots’ for illegal killing identified in these regions 10 are in Azerbaijan, but EU countries like Germany, the Netherlands and Bulgaria also feature.

Birds are primarily killed illegally for ‘sport’ and ‘food’ in the Caucasus, and for ‘sport’ or ‘predator and pest control’ in Northern and Central Europe. In Azerbaijan alone, despite some progress, as many as 900,000 waterbirds are thought to be illegally killed each year. Illegal killing by ‘tourist-hunters’ is widespread across Central Europe; for example in Romania, Eurasian Skylarks are not traditionally hunted and are protected by law, yet thousands are killed each year within its borders by foreign hunters.

For some species of conservation concern – like the globally Near Threatened Little Bustard or the Endangered White-headed Duck – the toll imposed by illegal killing may be too great for the species to sustain. Respectively, on average 10% and 3% of their global population may be killed each year. For some migratory species, illegal killing in each country along their route, alongside mortality from legal hunting and habitat loss, is likely to add up to a significant impact.

The latest review identified raptors as the bird group with the highest percentage of species affected by illegal killing, with 51 out of the 52 raptor species present in the area covered being affected. Georgia had the highest levels of illegal raptor killing in the regions covered with an estimated average of 12,400 raptors being killed each year, well ahead of Germany, Romania and Belarus which had the next highest levels. In many countries raptors are singled out for persecution through poisoning, shooting and trapping at the hands of some game and land managers and special interest groups for whom extermination of all predators is daily work. It happens out of the public gaze with laced baits, cruel traps, illegal shooting, and the slow death of chicks whose parents have been killed. More than 10,000 Eurasian Buzzards were reported to be illegally killed on average each year. Pallid Harrier, White-tailed Sea-eagle, Red Kite, Levant Sparrowhawk and European Honey-buzzard may potentially have more than1% of their global population illegally killed each year in N & C Europe and the Caucasus region. This is of particular concern for Pallid Harrier and Red Kite which are globally ‘Near Threatened’. The evidence of these crimes is often carefully hidden from sight, but the result is visible in the many areas where populations of raptors are far lower than the land can support. The public may be aware that something is wrong when highly publicised and expensive reintroduction programmes for charismatic raptors fail or hang by a thread because the carefully nurtured birds are picked off almost as fast as they can be released.

This latest review added to results of the Mediterranean review paints a grim picture of what is happening in the African-Eurasian flyway. Perhaps most shocking of all is that around 10 million birds on average are estimated to be being killed in EU countries every year. The EU Birds Directive provides a strong legislative framework for protection, yet its provisions alongside those of the Bern Convention and Convention on Migratory Species (CMS) are simply not fully implemented in many countries. On the ground the reality is that perpetrators continue their activities largely unchecked, with very low rates of detection, prosecution and conviction (as described for the UK in RSPB’s recent Birdcrime 2016 report). In many countries, even when cases are successfully prosecuted, penalties are inadequate to act as a deterrent; especially so where there is considerable financial reward for perpetrators who may sell their catches alive as cage-birds, dead or alive for food, or for taxidermy.

There is no doubt this is a difficult issue for national authorities to tackle and important progress is being made in some countries. Every successful prosecution helps to change things for the better and sends an important message to perpetrators. National action plans on the issue are in place in some countries flagged as having high levels of illegal killing and taking in the BirdLife-led Mediterranean review, such as Egypt and Italy. In others, like Cyprus, success is a moving target with authorities bending to pressure from special interest

groups to weaken the legislation and the action plan under development. The EU has demonstrated that it is prepared to take legal action against Member States for failure to enforce bird protection. Lack of political commitment to the issue means that law enforcement agencies often lack adequate resources and training. Some countries have dedicated wildlife crime units and a specific budget is allocated to fighting wildlife crime. In other countries this budget is not ring-fenced and other priorities take precedence.

There is hope on the horizon. The governments of the Mediterranean and Europe are working together with other stakeholders through the CMS task force on illegal killing, taking and trade of migratory birds and the Bern Convention to face this difficult issue head on, take action, share information and ideas and measure progress.

BirdLife partners are already working with others in each country to tackle illegal killing and taking at the blackspots identified in the Mediterranean review. Working with national authorities, LIPU (BirdLife in Italy) is trialling use of drones for surveillance of illegal bird killing activity, and BirdLife partners in Hungary and Greece are working with authorities to train dog units to detect poison baits and poisoned birds. There is promising work underway between the European Union Network for the Implementation and Enforcement of Environmental Law (IMPEL), the Federation of Associations for Hunting and Conservation of the EU (FACE) and BirdLife aimed at better understanding the issue of hunting tourism to identify solutions. Many BirdLife partners are working to educate children and change hearts and minds in local communities. In Lebanon SPNL (BirdLife in Lebanon) has made great progress in the past year working with national authorities and the Committee Against Bird Slaughter (CABS) to clamp down on illegal killing, and important prosecutions have resulted.

Success on the flyway requires much greater political commitment, more investment in enforcement, stronger penalties and better monitoring of the issue from governments, zero tolerance of illegal killing among hunting associations and rural communities, and greater awareness and a stronger voice from civil society. Better monitoring and increased surveillance of this issue is urgently needed in most countries to increase detection of crimes, help identify priorities for action and to measure progress.

That’s why BirdLife has launched a new campaign alongside the report, to tackle the problem. Funds are being raised to support the work of BirdLife Partners at the national level and in the field and BirdLife’s science and policy work to highlight and address this issue.

Brochet et al. (2017) Illegal killing and taking of birds in Europe outside the Mediterranean: assessing the scope and scale of a complex issue. Bird Conservation International https://doi.org/10.1017/S0959270917000533

Brochet et al. (2016) Preliminary assessment of the scope and scale of illegal killing and taking of birds in the Mediterranean. Bird Conservation International 26: 1–28