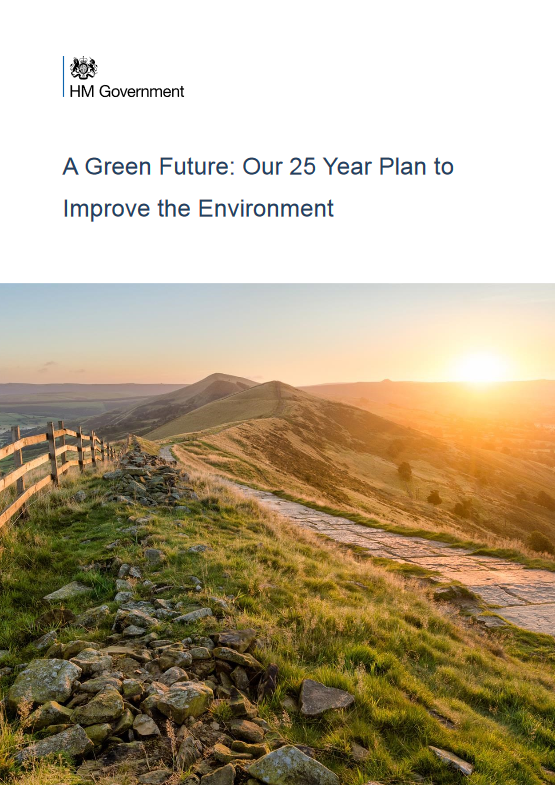 The government 25-year plan for the environment is a significant document. It covers most of the correct ground and says many good things. The proof of it, as noted by many others, will be in the extent to which it is delivered, but in six months Michael Gove has moved the Conservative Party quite some distance from its dull, uninspiring, and quite honestly, toxic position in the 2017 general election. That is a political achievement even though it hasn’t resulted in much environmental gain so far. But Mr Gove has done more for his party’s image in six months than previous Environment Secretaries have done in 7 years. He has also done his own political currency a bit of good.

This is more strategy than plan and almost any government can write a 25-year strategy about anything, any time – a strategy is not a plan and so it is bound to be at a high level. And 25 years is a very long time.  Imagine anyone writing a strategy 20 years ago and imagine how well that strategy will look in five years’ time.  There’s nothing wrong with strategies but this one needs considerable underpinning with plans and action. And so we’ll have to wait and see.

A Conservative government writing a 25-year strategy right now faces three main problems: the uncertainty over Brexit details, the devolved nature of the UK and the ideology of Conservatism.  Of these, I regard the last one as being the most hampering.

The shape of Brexit (or even, of course, whether it happens or not) will determine how much of existing EU thinking we will have to retain.  We haven’t a clue what Brexit will look like and so we don’t have that much clarity, even at strategic level, of what this government wants the future to be.  Well Mr Gove ‘helped’ get us into this mess and his 25-year plan is considerably hampered by the position in which he now finds himself. Less of an Unfrozen Moment and more of a ‘Frozen in the Headlights Moment’ – and it’s a moment which may last for many years.

A devolved UK means that the Westminster government, which of course is the UK government for some matters but the English government for many others (including most but not all of the matters described in this strategy), can mostly talk about what will happen in England.  But outside the EU then our neighbours over Offa’s Dyke, Hadrian’s Wall and across the Irish Sea have the same freedoms to do things differently as does the government in England, except after Brexit there will be no statutory conservation framework inside which all four UK nations must remain.  The Westminster government can’t lay down the law in its strategy which isn’t anyone else’s strategy. Watch this space over the next couple of years – there may be trouble ahead!

But it is the ideology that mostly gets in the way. Assuming that good things will happen because the market will deliver them is in some narrow ways true of economic outcomes but not of either social or environmental outcomes.  The environment has been screwed by the largely unintended environmental consequences of a whole bunch of industries responding to market signals – farming, forestry and fisheries just for a start.  The whole business of ecosystem services is a means of trying to correct market failures for the environment and it is well worth a try, but we are miles away from having a working model; and until we do then we should rely strongly on old-fashioned stuff like regulation.  But Conservatives don’t like regulations (particularly those shaped in collaboration with our mates in the EU) and so, despite the urgency of the environmental crisis the Conservatives go for convoluted solutions which involve chatting to people about doing better and sending economic signals to nudge people in the right direction whilst waving a regulatory stick around rather unconvincingly for the distant future.

A good example crops up in this strategy where the aim is to end the use of peat in horticultural products by 2030.  Ending such use is a worthy aim but 2030 is a long way away for what is quite an urgent and simple change. Back in 2010 I believe we almost persuaded Richard Benyon, the environment junior minister, to ban the use of peat for these purposes but he weakened and brought in the current voluntary target for amateur gardeners to phase out peat use by 2020 (how is your street doing on this? ask your neighbours whether they know about this target and know that government is relying on them to send strong signals to industry on this matter) and a voluntary target for professionals for 2030. Last week’s strategy says that Defra will look at stuff in 2020 and have another think about it. Ban it! Or at least say now (or actually last week) you are going to ban it in 2025 and let the industry sort itself out.  Not dealing with peat doesn’t fill one with confidence that this government will deal with plastic.

There are many examples in this strategy where the timescales are long and the proposed actions are short on detail but also short on proven effectiveness.   Heaven help us if the measures are watered down over time – they are very dilute now.

But the most worrying thing is what the strategy doesn’t say. It does, of course, try to give the impression of saying everything and a bit of constructive ambiguity is to be expected.  There are many places where subjects are mentioned, nothing is promised, but the words give hope to the optimistic.

There is no clarity on the future role of EU site designations over the next 25 years, even assuming we leave the EU.  They are mentioned, but hardly mentioned. We all know that they will remain in place and in force on the day that Brexit happens but this strategy does not set out this government’s intentions for them. And no, it won’t do to say that that has already been done, because the door has always been left open for big changes in protection once we leave the EU.  The same is true for species protection.

Despite some good words about extra stuff, and better stuff, there is no clarity about the future of the existing stuff.  I don’t trust this government on this issue and so I always look at these aspects as carefully as I can.  This strategy does not tell us about how protected will be protected species and habitats in future. That is very worrying.

We are promised a new Nature Recovery Network but I really don’t know what it is intended to be (or when) and it appears that the funding for it will fall heavily on voluntary partnerships and sponsorship so we could have one already if it’s that easy!  The role which government will adopt is not clear.

There is little said about the uplands and what is said is scattered all over the document. There are plenty of things that might apply to the uplands but it isn’t clear whether or not they do. Take for example trees, and even the Northern Forest. Are we going to see the uplands moving towards a rewilded state with more trees moving up the valleys and onto the dry heaths or not? Maybe we are, but it isn’t very clear although there is a lot that is said about the advantages of trees in storing carbon, increasing wildlife and reducing flood risk. Does Michael Gove see Walshaw Moor having many moor trees? If so how is this going to happen when grouse moor owners hate trees?

Potentially the most significant change for the uplands is a promised review of the role and powers of AONBs and National Parks. This is a good idea for the reasons set out in the strategy – the current framework is old and is not fit for purpose. The same points have been made in this blog (and by many others including in public consultations) and there is potentially a way forward offered here. A review of the working of NPs and AONBs is not the same as radical and progressive review but it will apply to c25% of England and most of that will be in the uplands.  There is much, potentially to be gained from this process although the forces of conservatism will be keen to see this opportunity used to cement nineteenth century practices into our twenty-first century future.

This strategy is an achievement of a sort – it covers the right ground in a fairly convincing way and with a fairly convincing level of enthusiasm.  It is miles better than Defra would have delivered under any of the previous three Secretaries of State. When I first read it I was more impressed than I am now, because on further reading one notices the long timescales, vague mechanisms, unconvincing approaches, gaps in funding and lack of detail.

It seems to me to be a better strategy for resource use than it is for nature.  Wildlife won’t feel any safer this Monday than it did last Monday.

But this strategy suffers from the fact that a new Secretary of State arriving in Defra wanting to make her or his mark, and do some good, finds that there is not the support network of keen and knowledgable staff within the department, nor in its agencies, nor in its favoured advisors, to come up with something that looks any better than quarter-baked.  Mr Gove needs more environmentalists around him and more experts around them.  His predecessors and his government colleagues have dismantled much of environmental thinking and ambition over the last 7+ years and this strategy is the result. Even when Defra tries hard and puts some effort into it it falls some way short.

PS Hen Harriers get a mention – they need reintroducing apparently!

PPS  Labour doesn’t have an environment strategy – so this is probably the best one around – heaven help us!