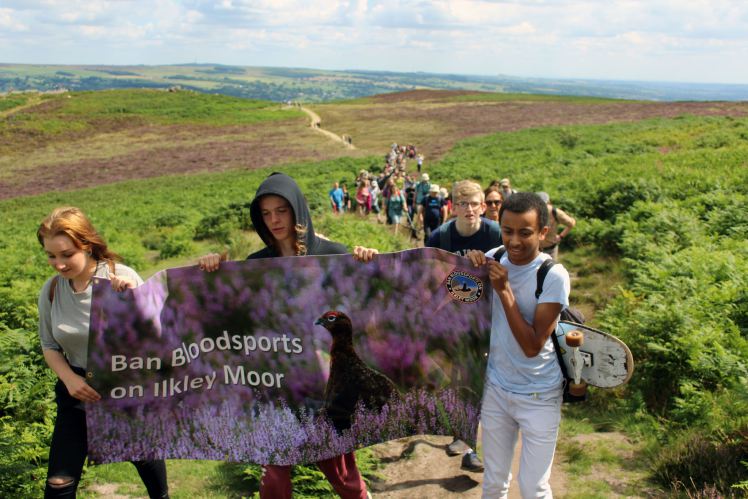 The Labour group (48 councillors) holds a majority on the Council (89 councillors in all) and the move to end grouse shooting is also supported by the LibDems (10 councillors) and Greens (3 councillors).  This makes it certain that the lease will be terminated and the matter does not have to go to a full council meeting (but if it does, the the votes are there for a ban).

Luke Steele, Spokesperson for Ban Bloodsports on Ilkley Moor said ‘Bradford Council’s decision tonight not to renew grouse shooting rights for Ilkley Moor is to be commended in the highest terms. It reflects the urgent need to reverse wildlife decline, habitat degradation and public dismay which has overshadowed this treasured moorland since grouse shooting was introduced in 2008.

We thank all of those who have relentlessly pursued an end to grouse shooting on Ilkley Moor – the strong cross-party representation of Parish and District Councillors, regional MPs including John Grogan, Alex Sobel, Judith Cummins and Naz Shah, visitors to the moor and conservation groups. This is as much a victory for them as it is for the precious wildlife and habitat. Our efforts will now turn to reversing the terrible legacy of grouse shooting on the moor in pursuit of a first-class asset for the region, which promotes wildlife biodiversity, education, leisure and the local economy.’.

Congratulations to all involved in this campaign which has persuaded local politicians to put an end to grouse shooting on this area of public land.

35 Replies to “An end to grouse shooting on Ilkley Moor”