This blog follows on from an earlier post today. 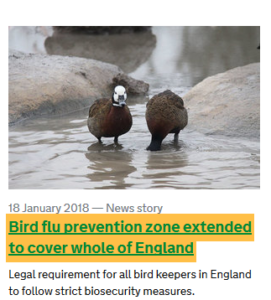 I’m interested, mainly because I am interested in birds, but also because I am interested in ecology, and also because I have reason to be interested in the impacts of avian flu on poultry keepers, in how commercial poultry flocks get avian influenza and the role of wild birds in those events.  I suppose I’m also interested because back in 2007 I had a bit of an insider view of how Defra handled avian flu outbreaks  (see Fighting for Birds pp238-243) and at that time (a long time ago, yes) Defra clung, for far too long, to the public position that it was all down to wild birds when they knew that there was a far more likely source of infection.

When Defra talks about ‘wild birds’ being the main carriers of avian influenza I am sure that they are right but that is such a vague and all-encompassing category that it takes us nowhere useful in trying to figure out the best way to handle this issue to the benefit of poultry farmers and the public (both of whom pay the bills when outbreaks occur). And another reason I’m interested is that whenever you put the vets in charge of things it always seems to be wildlife that gets killed however complex the issue really is (Badgers anyone?).

So, those are reasons I’m interested. And my previous blog today pointed out that the images that Defra uses on this subject inspire no confidence that they understand what a wild bird is, and the data they release look as though they don’t tell us much either.

Part of the response that I got from APHA to my requests for information is this: 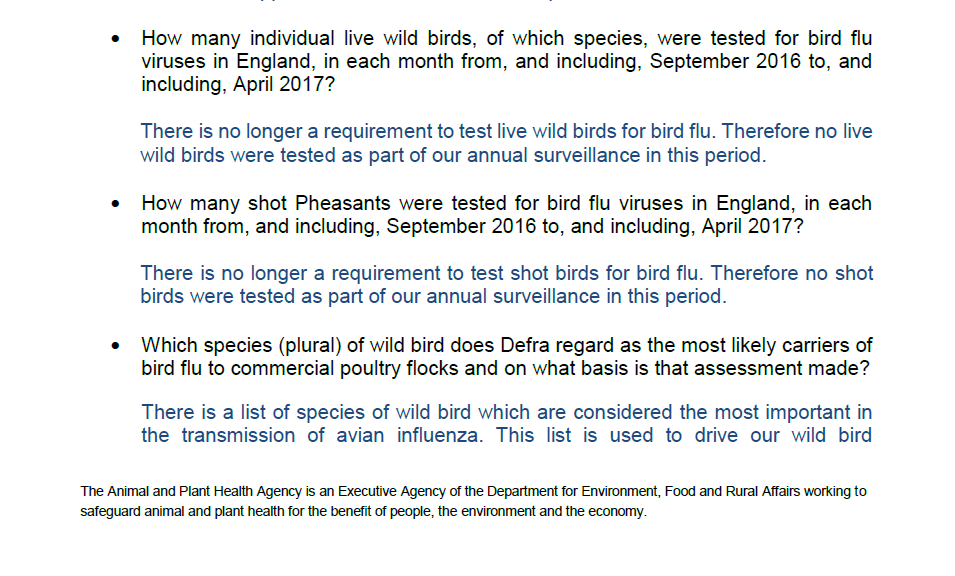 That useful-looking link is here – and one of the most interesting bits I have found so far is Table D.1 in Appendix D (it starts on p86) which is a list of the number of dead birds tested for avian flu virus and the % of them which were positive tests for the virus.  These are pooled data across the EU for all years 2005-2017 (up to April) but excluding 2011, 2012 and 2013.

It is the EU equivalent of the table in my previous blog which covered December 2016 – end of April 2017 for England, but for a vastly larger area and over a much longer period of time.

Have a look at it and it looks quite impressive because the numbers of birds are really quite large, and the number of species is really quite large too.  Given the sample sizes, it does appear to demonstrate the absolute role of ‘waterbirds’ in being likely vectors of avian flu (and, I’ll say it again, I’m sure that is very likely).

But look again with a birder’s eye and in that long list of species there are some interesting species.

Let’s take Sterna dougallii for example – one of my favourite birds, the Roseate Tern. Now, only three individuals were tested and all were found to be clear of the virus (negative results) but this is a species that is not present in Europe when avian flu is usually happening. Roseate Terns are in West Africa between October and April (at least). But, I guess, if you have a dead Roseate Tern or two to hand then it is absolutely worth testing them.

Another species that caught my eye was Fulica cristata – the Red-nobbed or Crested Coot – a very very rare European bird.  My easy-to-hand reference book, Birds in Europe is rather out of date as it was published in 2004, but that gives the European population as 80 pairs (which won’t be orders of magnitude wrong these days since the little devils are quite difficult to track down), and yet 310 individuals were tested (all negative).

The 28 Wild Turkey which were tested (all negative) represent a new species for the continent as does,  I believe, the 27 Horned Puffins (all negative).  This list is not a list of tested dead wild birds in the sense that you and I know wild birds, it clearly includes captive collections which aren’t farmed birds. So when we see that lots of Dalmation and White Pelicans have been tested, and quite a few Flamingos and an awful lot of ducks, we are now left wondering how many of these birds were wild wild birds and how many were captive wild birds. I’m sure someone must know, but it makes you wonder doesn’t it?

Perhaps the most amazing figure, and there must be a story behind it (maybe a story of a captive population? – but that seems unlikely to me), is the very high, 75%!!! , incidence of positive tests of Black-necked Grebes.  Does anyone know the story behind this? If you ever see a flock of Black-necked Grebes dive-bombing a poultry farm or walking down the drive to it, then that would surely be a cause of concern.

My point is, I find it difficult to find the evidence that points me to the role of wild birds in spreading avian flu (though I’m sure they do) when the data are of such a sort.  It’s a massive report so I may be missing the most telling parts so I’ll keep looking because this is where APHA told me I would find the evidence.

It is possible that they meant me to read p28 with the helpful title of ‘Most likely source of virus introduction’ – that sounds promising and it is surprising to find that it is the shortest section of the whole report (or close to the shortest) so here it is: 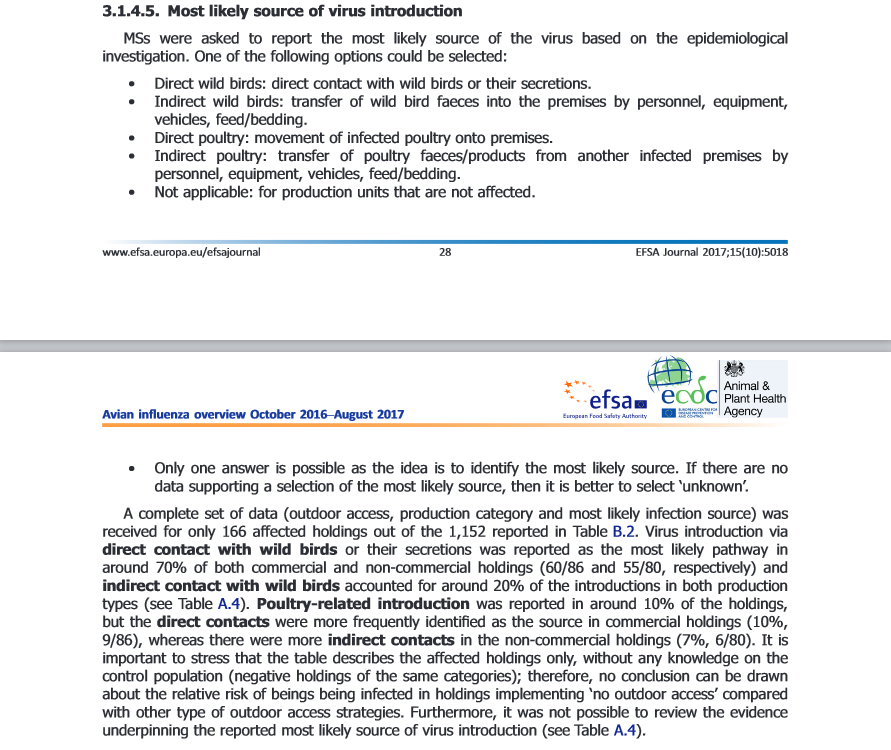 Member States were asked to guess (that’s my choice of word but I don’t think it is wrong) where the affected commercial premises got the disease from and most of them didn’t answer for most cases – so the overwhelming answer was ‘Don’t Know’ (86%) but for the rest, 14% of outbreaks, the Member State guessed ‘Wild Birds’ on 70% of occasions (that’s c9% of the total altogether) and since there is considerable doubt as to whether ‘wild bird’ includes ‘captive unwild birds in eg waterfowl collections’ then even that might be a bit of an overestimate.

I’m not convinced that these people know what they are doing.  But this report is a big report and if you can find anything interesting in it then do please put me right, or add petrol to my fire.