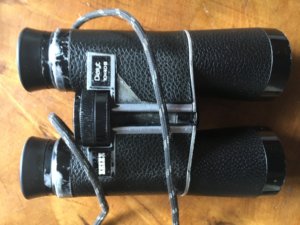 Thank you to everyone for your birthday wishes yesterday for me and my binoculars – we were together all day and had a good day’s birding at Titchwell RSPB reserve in Norfolk where the sun shone for all of our visit.

In these days of social media I found I have birthday wishes arriving from all angles: Facebook messages (public and private) tweets and Twitter DMs, LinkedIn messages, texts, emails, phone calls, birthday cards and face to face!  Thank you all.   And many finished with something along the lines of ‘Keep up the good work’ which, good or not, is what I intend to do.

And the birds? Nothing that would set a twitcher’s pager buzzing or pulse quickening, but 68 species at Titchwell with a noticeable lack of spring migrants but plenty of spring behaviour. A single, non-singing, Chiffchaff was the only spring migrant but we saw some pretty good displays by almost-skydancing Marsh Harriers. There was a Kittiwake and some Merganser out to sea and a good group of waders on the shore until some idiot photographer scared them away. There were Med Gulls in abundance; first gulls over us when we parked the car and last when we re-entered it some six hours later and also loads of Brambling (I don’t remember seeing so many at Titchwell ever before). And signs of spring were there; distant Coltsfoot, bumblebees and lots of frogs (but not a single butterfly).  And the chilli and baked potato were tasty too.

When we returned home I watched a video from OneKind, LUSH and the League Against Cruel Sports which highlights the scale and futility of Mountain Hare culls on grouse moors in Scotland.  You’ll be shocked by it and you’ll want to do your bit to put this slaughter to an end. Watch the video, sign OneKind’s e-action and do sign Gavin Gamble’s e-petition to ban driven grouse shooting too, please.

Speaking of which, my binoculars were thrilled by how many signatures were added to Gavin Gamble’s e-petition yesterday – over 700 and it passed the 43,000 signatures barrier by several hundred. This must owe quite a lot to a tweet from Martin Hughes-Games: 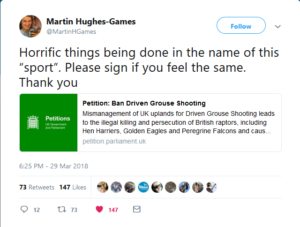 With just four days to go until Gavin Gamble’s e-petition ends, 45,000 signatures looks a highly achievable target.  Thank you, all, for your support.