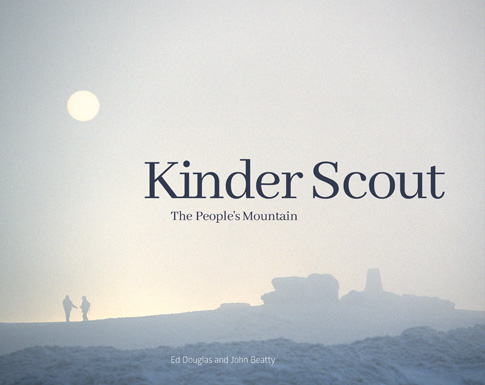 Sometimes a book arrives in the post, out of the blue, and I wonder why I was sent it. That applied to this book although I wasn’t complaining as it’s beautiful and has an interesting story to tell.  The ‘people’s mountain’ refers to the Kinder Mass Trespass of 1932 which hastened (or just perhaps delayed, but I think hastened) the arrival of National Parks including the UK’s first, the Peak District in 1951, and eventually the wider right to roam of the 2000 Countryside and Rights of Way Act.  However limp are UK National Parks, and they are as flaccid as the left over leaves of a round lettuce in a  salad bowl the morning after a hot summer’s night, we are still better off with them than without them and so this large lump in this National Park is well worth celebrating.

The images are very beautiful.

The text too is engaging and tells some very good stories of people and places. Kinder and the surrounding Peak District is an interesting place for reasons more ancient and more recent than that famous and controversial mass trespass nearly 90 years ago.

My small gripe with this lovely book is that it has no introduction, no index, no foreword and no declared structure or direction. The first page of text is the first page of the first chapter – a chapter called ‘Sand’ which isn’t really about sand, and the book goes on like that. Call me old-fashined (do!) but I like a little orientation when I enter the pages of a book so that I have an idea of where it might take me and why. But you may not be bothered by this.  And it is a lovely book.

But a consequence of the lack of any of those pointers was that I found to my surprise that our campaign against driven grouse shooting was mentioned, pretty enthusiastically, in the chapter which contained most environmental content and that there was a photograph of the sodden 570 in the Derwent Valley on 10 August 2014.  And that chapter, Moss, ends with ‘Most people aren’t even aware of such a thing as a hen harrier, many won’t much care about the parlous state of the Peak District’s wildlife, but the radical edge this space has carried in the past is being sharpened again.’.  Ah! That’s why I was sent this lovely book.  And if we are carrying that radical edge forward from the Kinder Scout mass trespass to the banning of driven grouse shooting then we are in fine historical company as far as I am concerned.

And so it is somewhat fitting to review this book, on this day, when the parliamentary constituency which contains Kinder Scout, High Peak, leads the list of those supporting Gavin Gamble’s e-petition to ban driven grouse shooting and neighbouring Sheffield Hallam lies second in the list with other nearby constituencies well represented too.  If you haven’t yet signed it you only have until Monday to so so, so why not do it right now please by signing here.

And the image, by John Beatty, of Chris Packham and me on that day, soaked but smiling, with familiar faces in the background, is similar to several others I have seen but is actually, I have to say, the best of the bunch because Chris is smiling slightly and we are both looking straight into the camera lens. So, I guess I have almost met John Beatty but don’t know him at all.  But his photographs of landscapes, of wildlife and of people make this book even more attractive than the words of Ed Douglas would alone, and the words are very good.

I have grown to know and feel great affection for the Peak District over the last few years.  I’m not sure how I neglected it so much before – although, actually I do! It’s because it is a damaged landscape with much of the wildlife ripped out of it. The landscape is still beautiful in places but would be even more so once fully healed, and a landscape without its wildlife is always a lesser scene.

Everyone who loves the Peak District should have this book and help to work for its ultimate redemption.  We will win!

Kinder Scout: the people’s mountain by Ed Douglas and John Beatty is published by Vertebrate Publishing.