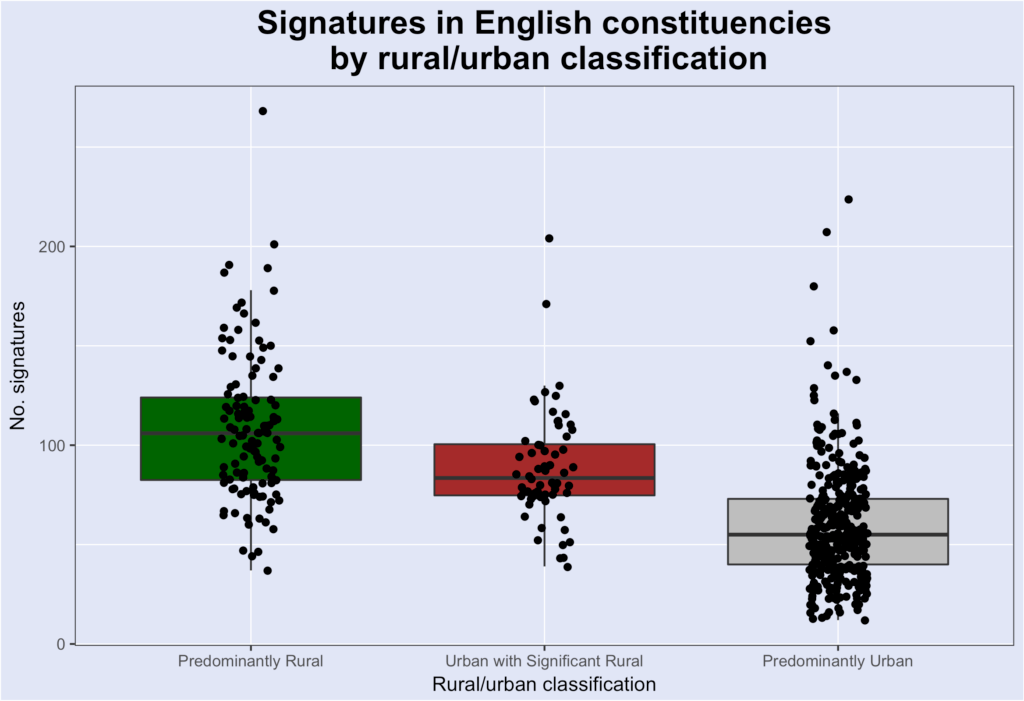 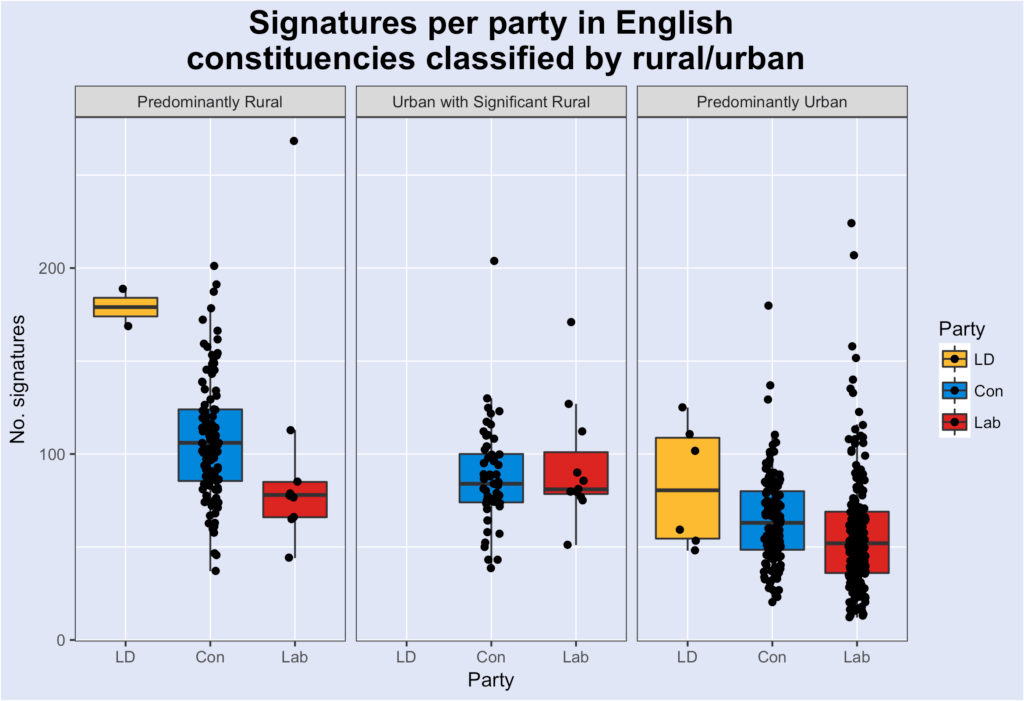 We’re used to this – but it is worth remembering this graph every time someone from the Countryside Alliance says that those against some or all countryside ‘sports’ are just townies.  They aren’t.

And the second graph above shows that this pattern remains true within constituencies which elected MPs from different political parties at the last (2017) general election (less convincing for Labour than Conservative and Liberal Democrat). This is interesting as there has been a turnover of who won seats and a turnover of candidates since our 2016 e-petition – but the pattern remains strong.

And who knows how far away the next general election might be.

The league table of 10 top-scoring constituencies is interesting too.

Pretty obviously, but it’s worth stressing again, these seats all either have grouse shooting within their boundaries or in neighbouring constituencies.  These are areas where grouse shooting is a local issue.

High Peak must be regarded as a marginal – it was won in 2017 by Ruth George from Andrew Bingham who spoke in favour of grouse shooting in the Westminster Hall debate. Being in favour of a ban on driven grouse shooting might well be an electoral advantage in this seat (which rules out the Conservatives).

Sheffield Hallam must be regarded as a marginal too.  It was lost by Nick Clegg in 2017 to a Labour candidate who then lost the Labour whip for having said unacceptable things about sexuality.

Sheffield Central is the seat that Natalie Bennett is fighting and the issue of trees being cut down in the city may be the issue most prominent in people’s minds, but not so much as to prevent this being the third Peak District regional seat in the top three constituencies supporting a ban of driven grouse shooting.  The Peak District is a highly mobilised area on this subject and I’m publishing a guest blog tomorrow which highlights some very interesting news from the Peak District.

Calder Valley is definitely a marginal seat with Craig Whittaker’s majority (over Labour‘s Josh Fenton-Glynn) only 600 – Whittaker also spoke in favour of driven grouse shooting in the 2016 Westminster Hall debate.

Derbyshire Dales, Thirsk and Malton and Skipton and Ripon have strong Conservative majorities but Westmorland and Lonsdale is definitely a marginal seat with Tim Farron having a majority of only 700 or so over the Conservatives.

Inverness, Nairn, Badenoch and Strathspey is now one of the few rural Westminster seats held by the SNP after the Conservative recovery in Scotland in 2017.

In Shipley, Philip Davies lost large chunks of his majority in 2017 – it wouldn’t take a massive swing to see the seat fall to Labour.

Candidates in these constituencies might expect to be asked about their views on grouse shooting.  Be prepared!