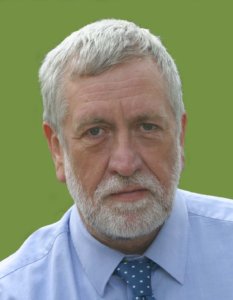 Lifetime bird watcher and over 60 years an RSPB member, Dick Newell, retired from the software industry, now devotes time to devising ways to help Swifts, which led recently to the BTO giving a Marsh Award for Innovative Ornithology to Action for Swifts.
actionforswifts.blogspot.com documents a large number of case studies, designs and ideas.
Dick wrote an earlier blog about Swifts in December 2016 (What if a Swift were a bat or a newt?).

This blogpost is about publicising Swift Awareness Week which will be taking place across the UK and in Ireland in June.

One may well ask, why do we need a Swift Awareness Week?

In a previous guest blog post, I lamented the lack of any legal protection for Swift nest sites outside the breeding season. Because bats and newts do have such legal protection, every environmental consultant is aware of them and takes the time and trouble to search for them to include in their environmental impact assessments. It is not so with Swifts.

It can cost a lot of money to accommodate bats or newts, but making provision for Swifts costs very little.

Some level of legal protection is available, provided the local planning authority knows there are swifts breeding in properties to be renovated. They then have the option of imposing a condition to preserve existing access to nest sites, or to provide mitigation in the form of requiring new nest sites. Whether such instructions are carried out competently (or even at all) is rarely monitored.

We will use an anecdote to illustrate the consequences of a general lack of awareness of Swifts. Fortunately a local person was very aware:

She alerted us to a situation where a garage was about to be demolished while there was still a pair of Swifts feeding a nestling in the roof. The garage was to be removed to make way for a new development of 4 houses. While we could have played hard ball and insisted that the project was halted, we did not do this. Confronted with a large steel ball hanging from a crane, we instead took the pragmatic (though possibly illegal) approach, of removing the nestling for fostering by rehab specialist Judith Wakelam. It was successfully released 2 weeks later.

The company hired to assess the environmental impact detected 1 bat leaving the garage, but the survey did not reveal the presence of Swifts. The recommendations included provision of bat boxes and bird [sic] boxes. One supposes a few tit boxes scattered around might make people feel good, but it would not do a whole lot for local biodiversity,

The 4 houses provide 5 suitable gables for Swift boxes, and, with the help of an enlightened developer, 10 internal swift boxes have been installed – a good end result.

This is but one small example of a house builder doing the right thing. Some major house builders like Barratt Homes and the Duchy of Cornwall are committed to incorporating large numbers of internal Swift boxes in their new developments.

Swifts, have a population half life of 20 years. We are not going to get any changes in the law, so a grassroots campaign is needed to raise awareness instead.

It is this thought that has inspired UK Swift Awareness Week 2018 – a nationwide campaign to hold events in the week of June 16th-23rd.

The Swifts Local Network, an association of more than 80 groups and individuals around the country is mobilising its members to hold Swift parties, Swift walks, Swift workshops, Swift displays, indeed any activity to get Swifts into the public consciousness. 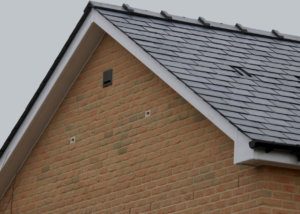 We would also hope that some of this will brush off onto environmental consultants, local government planners and the building industry. Imagine a box or 2 in every new gable in the country.

Left: 2 Swift entrances and a bat box in a gable. Photo Judith Wakelam

You can find an event near you on this Google map