On a hot summer’s night the people spoke – the vote at the end of last night’s rewilding debate in London was 52% in favour of rewilding the uplands and a mere 39% against. If 52% (actually a smidgeon under) v 48% (actually a smidgeon over, and without counting the don’t knows and did not bother to votes) is enough for us to leave the EU then this is clearly enough to have persuaded Michael Gove, who was sitting in the front row, to get on with a massive programme of bringing nature back, naturally, to the English uplands.

And this vote in favour was gained from an audience packed with farmers! In one of her few useful contributions to the evening the President of the NFU, Minette Batters, asked for a show of hands as to how many of the audience of c400-500 were farmers and how many were upland farmers. There were about half a dozen of the audience who self-identified as upland farmers (amongst a few dozen farmers in all); more than 1% of us.  The audience would have needed to be about 60,000 for those six to be a representative sample of the population.  And so Michael Gove can be quite sure that the enthusiasm for rewilding is massive given the highly unrepresentative nature of the audience. 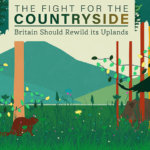 But what of the debate? It was fun and almost certainly more entertaining than watching France beat Belgium 1-0.  Well worth the £20 entrance fee, and you will be able to watch a video of the evening on Friday, we were told – I’ll try to put a link in here when it is available but watching Match of the Day is never as much fun as being there, is it?

Debates of this sort rarely get to the heart of the matter and rarely tackle the issues adequately – that was true here but it was a much, much better attempt than is usual in these events. The £20 was worth it just to hear George Monbiot’s bravura performance – and he spoke first in the debate so watch him and revel in his skill.

But I haven’t properly told you who was on the field, have I (football references are just too tempting)?  The referee was Jonathan Dimbleby (who was rather tolerant of foul play), and the Rewilding team, no doubt with three reintroduced lions on their shirts, were George Monbiot and Mark Cocker.  Both were very comfortable on the ball, strong in attack but sometimes a little slow in tracking back in defence. But they did play the ball, in contrast to the team of Rory Stewart and Minette Batters who spent the game rolling around feigning injury or playing the man rather than the ball. Batters would have been substituted early in the game had there been a bench of subs available and should have been shown a red card for telling the audience not to listen to the two Three Lions because they made their money out of writing apocalyptic nature stories – quite rightly the crowd booed her for this.  Rory Stewart, being the spitting image of Nobby Stiles, had to put in a manful performance to prevent an even greater drubbing of his team and he did it through a series of illegal tackles from behind and cynical ankle taps, often departing the scene trying to look innocent showing his palms to the ref and looking shocked that one of his opponents was rubbing their leg. Mr Stewart even fouled two people at once, one of whom was, I thought, supposed to be a teammate of his, when he compared George Monbiot to Boris Johnson (that must have stung a bit and needed an ice-pack after the game) for being great on the big picture stuff but no head for details! Ouch!  Stewart clearly wanted to take Monbiot out of the game but he failed.  Stewart came around to saying do rewilding but in the lowlands not the uplands, or do it in Scotland, but don’t do it in the English uplands such as in his sheep-wrecked constituency because these are historical cultural landscapes. This is just a way of saying that they have been knackered over a long time rather than knackered in a short time.  Batters tried to suck up to Michael Gove by saying how pleased we all were that he was still in the environment job and 500 people looked at the back of the Secretary of State’s head trying to discern a thought bubble rising from it which might have read ‘But I wanted to be Foreign Secretary! Boo Hoo!’. She also stunned the audience into silence by her pre-1970s’ grasp of the role of predators in ecosystems. Her parting shot was simply a quote from the sheep farmer’s propaganda book (reviewed here).

But in these debates it is hardly the arguments which one remembers, it is the artistry on the ball, the crunching tackles and the overall performance. The player ratings would be: Monbiot 9, Stewart 7, Cocker 7 and Batters 2.

The crowd was interesting.  Not just all those farmers packing the hall in numbers with Mr Gove but the Chair of Natural England (who enjoyed reading this blog, it seems), a few NE staff, FC, CLA, the Chair of the Hawk and Owl Trust, the Chief Exec and spin doctor of GWCT but very few senior wildlife NGO staff. Well, when I say very few, I didn’t spot any. What is the position of the RSPB, Wildlife Trusts, National Trust, WWF-UK and others on rewilding? They must have been watching the football.

41 Replies to “Start the rewilding now Mr Gove – the people have spoken.”