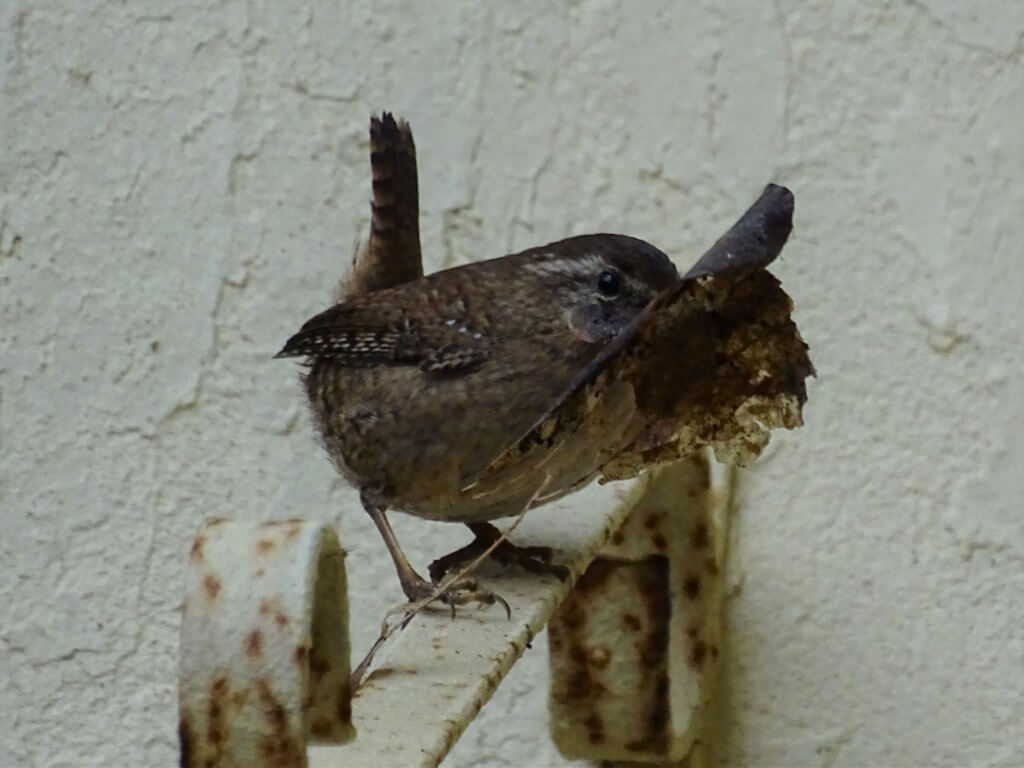 It was during the demise of the much fabled ‘Beast from the East’ that I first noticed him. A whirry blur of brown feathers flying below me as I looked out of the back bedroom window at the sad grey dripping masses of what had been, just a few days earlier, pristine white snow.  I didn’t really see it that first time, and something about its shape seemed strange. Whatever it was, it had piqued my interest and confused me in equal measure. Its flight path had been straight at the wall to the right of the window that I was looking out of.

Before I could really think too much about it, it appeared again, this time flying away from me across the patio, pitching up on a rock by the still frozen pond. A Wren. Cocked tail pointing skyward, it briefly paused before plunging headfirst in to the mass of vertical Ivy and Clematis that coats an old stone wall in a layer of thick green. This ten feet tall wall neatly splits the garden in to two very different parts and probably is as old as the house, dating back to the time of the English Civil War.

The wall is a thriving miniature forest, providing shelter, food and homes for a wide variety of mini beasties, from slumbering wintering Red Admirals to all action Pygmy Shrews. The upright world of the wall is full of dark crevices and caves perfectly suited to the troglodytical habits of the Wren. But the Wren didn’t stay long in the leaf clad wall, out it popped again, pausing just long enough for me to see the proportionally huge dead Ivy leaf it held in its tweezer like bill. The leaf, longer than the bird, explained the strange shape of my first glimpse, completely transforming the shape of this tiny avian beauty as it again dashed across the patio’s airspace towards me.

It was nest building. Brilliant I thought, as I leant forward trying to see where it had landed. The thud of my forehead against the window pane making me realise that perhaps I should move to a better viewpoint before getting too excited! Transferring myself to the back door I stood and watched and soon saw where he was building. A rendered wall joins the cob wall of the house to another old stone wall and atop that rendered wall is a small overhang of a slate roof. In the autumn I had cleared back some of the Ivy from here as it marched relentlessly towards our thatch. When clearing it I had inadvertently left a small, but firmly fixed stem, no wider than a pencil, that hung down beneath the overhang. It could measure no more than ten centimetres long and was shaped a bit like a hockey stick, it was on the curve of this Ivy hockey stick that my new miniature friend was somehow placing the huge browned Ivy leaves.

One after another, blurred dashes across the patio would result in a gradual increase in substance in the structure that the bird was constructing. At times it didn’t look feasible, and occasionally a leaf would refuse to be placed, slowly fluttering downwards as the Wren watched it fall, ‘ticking’ impatiently at it as it did so.  I stood and watched this frenetic construction for several minutes, despite being stood in the open and no more than four metres from the building site, the Wren paid me no attention whatsoever, other than a curious glance  every now and again. At one point, he came in and landed no more than thirty centimetres from me, cocking his tail up and dipping his legs before flying onwards with his latest piece of nest material. He didn’t see me as a threat, and besides, he was too busy to bother with the likes of me.

I say ‘he’ because it is the male Wren that does the building of the nest, in fact he builds several constructions within his territory  before his mate decides which one suits their needs best. As excited as I was that this Wren was making use of our house, I was also aware that it could be all for nothing. Over the next few days the structure increased, forming a solid platform of leaves that was beginning to take on a cup shape at its top and all of it unbelievably balanced on a mini hockey stick made of Ivy.

Predictably, just as it began to look like the finished article, the construction ground to a halt, no doubt the little builder was busy constructing another, but it wasn’t in my garden, his territory didn’t follow the linear boundaries of our human territories. For several days I made regular trips out to the wall, peering up at the structured mass of leaves in the hope that I could detect an increase in its form.

I watched the House Sparrows that were busy building their own nest in the old stone wall, warning them telepathically not to appropriate pieces of the potential Wren nest for their own. I’m not aware if human/avian telepathy actually works, but I do know the Sparrows abided by my wishes! And then, as I made coffee one morning, I saw the Wren on the moss clad stones by the pond, tearing at the bright green bryophytes so hard that he almost fell when they gave. The second stage had begun.

Once his mate makes her decision, the male completes the construction, lining the insides with a thick layer of moss. The morning’s much needed caffeine kick forgotten, I stood transfixed as the Wren continued to accrue an amazing amount of moss in its bill. Where would it go, would it be ‘my’ nest that she had chosen? Suddenly he flew, right past the window and up to the wall! Yes. Oh yes. I even punched the air.

I waited until he flew back past the window before heading out of the back door where I watched him gather more moss. When he got to the nest he would disappear straight in to it and unlike the frenetic activity at the beginning of the build, he would spend what seemed like an age within it. Occasionally I would hear him tick loudly, as if frustrated with an uncooperative piece of moss, but other than these minor issues, the construction of the nest progressed quickly. Watching him finish off his build, I couldn’t help but smile, nor could I contain my delight that this little passerine had chosen to build right here, right by me.

Why should I get so excited over a Wren nesting? After all, they are one of Britain’s commonest birds, along with ‘my’ nest there will be over seven and half million others across the country. Nothing special then. Except it is, it’s very special.

The Wrens chose to use our house and garden to try and rear a new generation of troglodytes. There are plenty of other human territories they could have chosen to share, but they chose ours. That makes me feel good, really good. Sharing space with nature is good for us, feeling good is good for us. Nature does that. We need more of it.

Ian Parsons spent twenty years working as a Ranger with the Forestry Commission, where he not only worked with birds of prey and dormice, but where he developed his passion for trees. Now a freelance writer, Ian runs his own specialist bird tour company leading tours to Extremadura. For more details see www.griffonholidays.com

This is Ian’s eleventh Guest Blog here and you can access all of them through the Guest Blog Archive – click here.