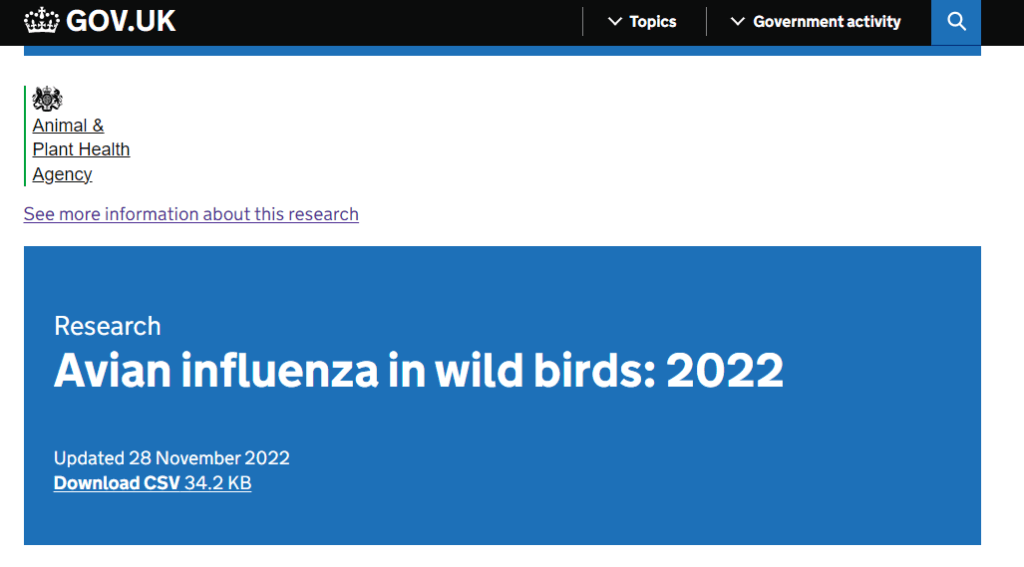 Cases of bird/poultry flu in wild birds in the UK continue to mount and are at a higher level than last year.  It hasn’t gone away.

Numbers of birds tested as positive: in a previous blog (click here) I compared the number of records of wild birds testing positive for bird flu up to and including week 37 (mid September) in 2021 and 2022.  There were loads more this year than last – partly because the summer of 2021 was almost a bird flu-free time whereas, if you can recall, this summer had lots of instances of birds dying in seabird colonies, particularly in Scotland.

In weeks 38-47 in 2022 there have been 200 records of birds testing positive for bird flu (lines in this table – click here). Many of these ‘records’ are of multiple numbers of several species (but that is how the data, such as they are, are reported). 200. The comparative figure for 2021 (from this list – click here) is 90. That indicates that there has been a step change in numbers of birds testing positive but the biases in the data make anything other than a vague hand-waving comparison rather difficult.

I’d guess that reporting fatigue has set in. It takes quite a lot of effort to report a dead bird to Defra and collect it up. Once you’ve done it a few times (if you are a nature reserve warden perhaps) then the prospect of sending in another dead Mute Swan might begin to pale – particularly if it is difficult to discern what use Defra put the data towards. I don’t know what the APHA attitude to testing birds is – they too might feel that a bunch more Mute Swans from places already having contributed corpses might not be worth their while (particularly if they have a limited budget for such analyses).

However, despite all that, throughout 2022 there have been lots more cases of bird flu in wild birds than in 2021. That’s partly because this summer was disease-rich, but even in the autumn there are more recorded cases this year than last.

The wild bird species affected: even Defra’s dire so-called surveillance system shows that over 60 species of dead bird have tested positive for bird flu so far in 2022 – compared with 25 species for the whole of 2021. And an impressive list of species they are too;

For new readers, and as a reminder to all, this list is not an accurate list or complete list of species affected. It is based on dead birds reported by members of the public although many of these birds will have been found and reported by nature reserve wardens rather than people in the street. Defra ask for records particularly of waterfowl and raptors and so they tend to get such records. A glance at the list shows that it is rich in large species and there is hardly a passerine to be seen in the list (just Blackbird, Carrion Crow and Pied Wagtail) – this doesn’t mean that passerines aren’t dying from bird flu. Note how many large white species are in the list! Defra does not mention in these reports any negative tests so there is no way of even beginning to assess whether there is any interesting variation in the proportions of individual birds of different species testing positive. Defra has a strange idea of what is a wild bird – it seems to include captive birds which aren’t poultry (that, at a guess, is why there is a Red-breasted Goose in this list). The list does not tell us anything much about how many individuals of different species have tested positive because if 1000 birds die, only a handful will be tested.

However, despite the caveats, over 60 species have been recorded so far in 2022 and the species total for 2021 was 25 species. That’s another strong indication of the reach of this disease into wild populations. Given that it’s been a mild autumn, things could very easily get worse before Christmas but already it is clear that 2022 has been a much worse year than last year in terms of wild bird species affected.

Gamebirds: Pheasants hardly featured in 2021, just in Weeks 15, 43, 45 and 50. In contrast this year (so far) there are 18 records of which the first was Week 35 (end Aug-early Sept) and there have been few weeks without records since.  The only Red-legged Partridge record from 2021 and 2022 (so far) was a couple of weeks ago, in early November (Week 45) in Suffolk. Defra was urged not to allow release of gamebirds this summer but decided that it wouldn’t impose any restrictions on releases. The minister with responsibility for biosecurity is Richard Benyon, a keen shooter.