Sometimes you have an observation and you don’t make the identification – and it niggles away at you until you solve it.

I returned to Crane Creek early this morning.  After yesterday I was keen to have some more.  I wasn’t alone – the crowds were there too.  But the weather was dull and the birds were fewer and didn’t behave quite so well.  I saw a lot of warblers but maybe yesterday had spoiled me.  When I saw a male Blackburnian at the top of a tree (my 20th warbler for the site) and it looked a bit dull despite being a fiery mixture of orange and black I knew that it was time to go. 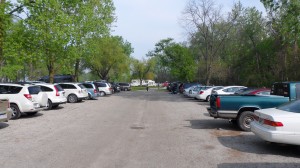 This period, ending tomorrow (Sunday) is regarded as ‘The Biggest Week’ and it lives up to its hype for the hundreds of birders who come.  In the car park I saw licence plates for just about half of US states. Not surprisingly most were from Ohio and neighbouring Michigan, Indiana, Kentucky, West Virginia and Pennsylvania but many from the next ring of states – Illinois, Missouri, North Carolina, Virginia, and New York.  Then a little further away there were Iowa, Tennessee, New Jersey, Delaware and Maryland. Long distance migrants were Alaska, Washington, California, South Dakota, Colorado, Texas and Florida.  And throw in Ontario, Quebec and Nova Scotia and you’ll see it’s not just a meeting point for birds.

There can be few other small patches of Ohio farmland that attract visitors like this – and that’s what the locals think too.

When I filled up with gas at the BP station in Oak Harbour the elderly man in charge, sucking an unlit cigar, was fazed by by non-US Amex card and we took a while to work out how I could pay but he was very friendly – as were his mates, six of them, who seemed to be using his gas station for a boys’ meeting.  As I left one of them asked ‘Are you a birder?’ to which I replied ‘Yes – how do you know?’ to which the answer was ‘There are a lot of you about just now.’ but it was said in a friendly way and was followed by a chorus of  ‘Have a nice day!’.  I certainly would not have visited Oak Harbour if it were not for the birds – not even for the excellent blueberry pie served in the friendly Kozy Korner restaurant (which isn’t nearly as naff as those Ks suggest it might be – very down to earth in fact.).

As I drove the 20 more minutes to Crane Creek I passed an ice-cream kiosk with a sign saying ‘Birders flock to us’.

And then in a tempting position in the car park is the Pam and Darryl’s Travelling Cafe which sells burgers, dogs, coffee, cakes and cold drinks.  Pam, a short, slim, middle-aged lady with a ready smile is front of house – taking orders, being nice to the customers and taking the money whereas Darryl, who looks like he may have, quite properly, tasted his own cooking, fries away outside the van.

Pam told me they were based in Columbus Ohio and spent 10 days at Crane Creek  each year – and it’s good business.  Yesterday they sold out of hot dogs (200+) by noon and were expecting a busy day today when I had a breakfast of egg and sausage roll.

The rest of the year they do auctions, street fairs and art shows but Pam said she liked the birders best – I bet she says that to all the guys.

Darryl asked me to tell you his burgers are ‘awesome’ and so they are.

There’s no doubt that the local economy benefits from all those birders – gas stations, accommodation, eating places and others.  It’s a windfall that I got the impression that the locals liked and appreciated.  After all, birders aren’t that demanding as far as comfort and quality food are concerned – although I would have liked a Cerulean on the menu.

And that niggling identification problem?  Yesterday I’d seen a chap who looked familiar but I couldn’t place him – and I didn’t hear him call otherwise I think I would have nailed him.  Today he was wearing a top with a Wildlife Trusts logo on it as we almost bumped into each other. It was Derek Thomas from Wales (here pictured wearing a tie) and we had a chat about what we’d seen and missed.

Derek Thomas – who’d have thought it?  These trans-Atlantic vagrants can be a bit tricky to identify!

Today’s soundtrack – back to Springsteen and Carly Simon.

And I told you that Man City would win inside 90 minutes didn’t I?