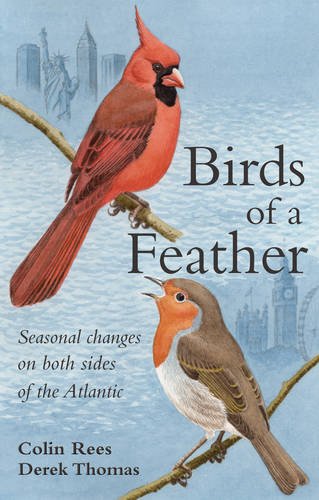 This is a lovely book – written by two ornithologists about the changing seasons on either side of the Atlantic Ocean.  It’s a simple idea but it works very well.

I don’t know Colin Rees at all, and I really only know Derek a little – he posed me an identification challenge in Ohio once.

Isn’t Robert Gillmor’s cover both clever and lovely all at once – like the artist himself?

The book consists of accounts, from either side of the Atlantic through the year, of birds seen and places visited. Each month has about 20 short, blog-length, essays.  And the observations carry you through the changing seasons and make you reflect on the time of year seen through naturalists’ eyes, in the same hemisphere but in different continents. So, both authors are waiting for the spring migrants to arrive and are delighted when they do – whether they are Wood Warblers or Yellow-throated Warblers.

But there is much more than just birds in here. The writers are educated men who are aware of the world around them, and care for it, and worry about its future. Current events are wrapped into the accounts with skill and without any forcing.  So we read about oiled Brown Pelicans, the Third Global Biodiversity Outlook, the Big Butterfly Count and the Wildlife Trusts’ Living Landscapes projects.

The writing styles of the two authors are similar – they go well together. There’s a very attractive visual clue to which writer is which, which changes through the seasons – buy the book and see what I mean (it’s rather clever and very fitting I think).

Some of these accounts were written several years ago, back in 2010, but all are timeless in their subjects. I hope the authors have kept going and might give us another volume sometime not too far away – I would definitely want to buy and read it.  But, if not, then this copy will get thumbed again each year so that I can dip into the time of year in the USA and Wales and vicariously enjoy nature and the authors’ thoughts and musings on the changing seasons.

All profits from the sale of this book will go to The Wildlife Trusts and to a ‘yet to be decided’ US conservation cause.

Birds of a Feather: seasonal changes on both sides of the Atlantic by Colin Rees and Derek Thomas is published by Troubador (from whom you can also buy it) and is available on Amazon as is Mark Avery’s Fighting for Birds and his soon-to-be-published-but-already-preorderable A Message from Martha.