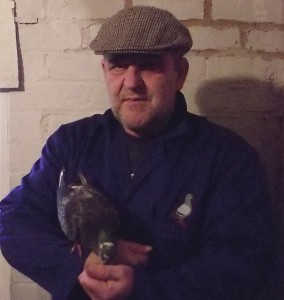 Hi all I’m Gary Burgess and I’m a Pigeon Fancier and would like to thank Mark for this opportunity to write this Blog.

I grew up in the late sixties/seventies. It now seems such a long time ago, almost like the dark ages. I was fortunate back in those days to live in an urban area that bordered on the outskirts of rural Lancashire.  Two of greatest loves of my life have always been pigeon racing and nature.  Somehow the two, seemed to make life complete.

I spent lots of time in the countryside and supposed I educated myself on all the things that nature had to offer.
I also witnessed the back end of the myxomatosis plague, that infected and almost wiped out the whole population of rabbits. This was a horrible time, where I witnessed these poor creatures, with matted fur and bulging eyes on a daily basis struggling to walk.

I lived through the demise of the Badger on Brockholes Wood.

Anyone who knew me would tell you I was quite solitary person, who spent most of my time, between the pigeon loft and the woodlands that surrounded the area.

I enjoyed wildlife and all it had to offer.

When I became a hedge layer, most of my work had to be done in the midst of winter, for obvious reasons, this suited me fine, because I had lots of time to spare in the summer.

For hours, used to sit and watch the wildlife in Mellings Wood, which was situated on the edge of a golf course on the banks of the River Ribble.

I remember watching the Sparrowhawks and Kestrels that have always inhabited that area as well as the Buzzards. Maybe I was fortunate back then to see such delightful species of birds that in some parts were rare and endangered.
Lots of other birds were also in abundance those days, finches, woodpeckers, lapwings, wagtails just to name a few.  I can still take people into these areas, to see creatures they have never seen. Such as Deer, Newts, and a whole array of birds.

But I must admit as the populations of birds of prey have increased dramatically, the small bird populations have started to diminish.

Another observation I have made, is where the populations of Sparrowhawks, were once in abundance. Are now devoid, because of the bigger birds of prey have moved in. Such as the Buzzards, Goshawks and the Peregrines.
It was nice to see quarry areas, that were always full of wildlife, be finally turned into nature reserves and attempts to get the smaller species of birds of prey like the Kestrel to finally re inhabit these areas, where it had been forced to leave because of the larger prey species had squeezed them out.

But now we have a problem and it’s a problem that is not going to go away.

That problem is, the smaller birds of prey that are being forced out of their natural habitats, by the larger more territorial species.

These mainly being the Sparrowhawk and the Peregrine.

Although they are two splendid creatures, they are now beginning to become nuisance in built up areas of the country.
Not only are they wreaking havoc on the populations of the well loved popular garden birds, they are creating a huge nuisance to the peaceful colourful garden aviary and terrorising their inhabitants.

More and more dovecotes are becoming barren places as their inhabitants are being taken and the pigeon fancier, is now becoming a target.

Their lofts are now being attacked relentlessly on a daily basis and although, the majority of pigeon fanciers are bird lovers.

They feel that nobody wants to hear their pleas for help on this matter.

The RSPB, just say what the hell it’s nature and come out with statements like. ‘ You should learn to appreciate the beauty of this magnificent hunter and how it skilfully catches it’s prey.’

There seems to be very little concern about this from the powers that be.

This is now beginning to infuriate the fancy, who are now quite rightly demanding action should be taken on their behalf.

The vast majority of pigeon fanciers, do not want to see the demise of these birds, but are asking why these large populations cannot be at least controlled, by the right authorities of course.

But the way the media and the RSPB seem to be handling it at the moment, are infuriating pigeon fanciers.
These are not hunters, raptor persecutors, nor do they want to turn into Rambo, dressed in camouflage clothing stalking raptors around their back gardens.

But this problem is clearly getting out of control and needs to be seriously debated in a civilised manner and an amicable compromise agreed to deal with this problem.

But the more the problem is ignored, the larger the number of predators will become, the more pigeon fanciers are deciding to call it day.

They are not the evil people they are trying to portray them as and it infuriates me to see the fancy portrayed in the press, in this way.

I know you are an educated man and also have a no nonsense approach to some matters.

For this is why you gained so much respect in your chosen field.

I haven’t gone down the route of quoting fact and figures as I know, as well as you, that would tie me up in knots.