If you are a regular reader of Mark Avery’s blog (and you really should be) then you will almost certainly be aware of the very frightening decline of the Turtle Dove. This is an iconic species that has been declining in the UK since the 1970’s. The problem is speeding up and between 1997 and 2010 there has been a 90% decline in this species.

The Turtle Dove is one of those species that most people will be aware of; even non-birders. This is a species that has been mentioned throughout history and has become very much part of our culture! This is why when my good friend (and previous guest blogger here) Jonny Rankin asked me to join him and a few other friends in a 300 mile walk across the historical core range of the species in England  to help raise funds for ‘Operation Turtle Dove (http://operationturtledove.org/) I said a big yes! The project is called Dovestep and will see us walking from Lakenheath RSPB reserve in Suffolk to Saltholme RSPB reserve in Cleveland (you can find out more here) 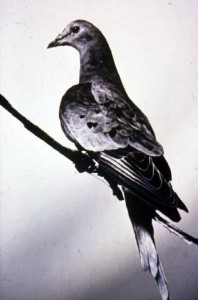 You will of course be aware that Mark Avery has written the book ‘A Message from Martha – The Extinction of the Passenger Pigeon and Why it Still Matters’ that is due for release later this year. The title speaks for itself and I am very much looking forward to reading this publication. There is a very strong connection between the extinction of the Passenger Pigeon and the plight of the Turtle Dove. The Passenger Pigeon is believed to have become extinct largely due to habitat loss and hunting pressure; these are the very same impacts that are contributing to the fast decline of the Turtle Dove.

Later this year will mark 100 years since the Passenger Pigeon became extinct, Martha was the name of the last specimen of this once common species that died in Cincinnati Zoo on September 1st 1914. For me there is something very obvious that we must learn from the tragedy of Martha and her kind. We should not forget Martha and cannot allow the Turtle Dove to go the same way as the Passenger Pigeon.

Given the significance of 2014 I have hatched a plan that will not only commemorate Martha but we will also be able to raise awareness and much needed funds for Operation Turtle Dove. My project ‘1000 miles in memory of Martha’ will see me running a minimum of 1000 miles (including no less than 14 marathons) during the year. At the time of writing I have already run 36.6 miles so far this year…..so just 963.4 left to do!

All money raised through this project will go directly to Turtle Dove specific habitat restoration or creation within the UK.

You can donate to the cause  via my Just Giving site here.