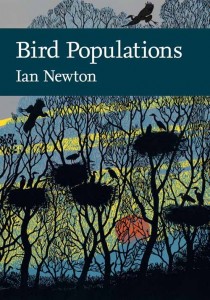 Prof Ian Newton FRS has been described as the UK’s greatest living ornithologist and there is nothing in this book to dent that assessment.

In his clear and precise way, Ian Newton explains the factors that affect, determine and regulate bird population levels.  There are plenty of examples which illustrate the general principles.

As Ian writes – much of our understanding of animal population regulation is based on studies of birds although the principles are much more widely applicable.

This is not the easiest of reads, but that’s because compensatory mortality and density dependence are not the easiest of subjects.  Ian provides the most accessible account of those difficult subjects that the birdwatcher eager to understand whether sparrowhawks are wiping out songbirds, for example, is likely to find (and, they aren’t – see page 165).

The fact that bird populations go up and down but often within quite narrow limits compared with what might be possible is such a commonplace of our lives that we tend not to realise that it is as interesting as it really is. A pair of Blue Tits can lay 10 eggs and rear all the young successfully so why aren’t we knee-deep in Blue Tits (pecking at our ankles and shins) after a few years? Thank heavens for disease, predators, cold winter nights, interspecific competition, lack of nesting sites and winter food shortages I say!As Blue  Tit numbers increase then some of these mortality factors bite harder and if Blue Tit populations decline then they bite less hard (on average) – that’s population regulation through density dependence.   And you only die once – if the Sparrowhawk gets you then the winter food shortage can’t – in fact, your death has made life a tiny bit easier for everyone else when the food bottleneck arrives. And if we wipe out all the Sparrowhawks, as we did over large parts of the country, then we still won’t be knee deep in parids as that winter food bottleneck only lets about the same number through.  Would you rather be ripped apart by a Sparrowhawk or starve to death in February?

Along the way you will learn about the impacts of climate change, fisheries, regulated hunting, unregulated persecution, poisoning from lead shot and pesticides on bird species that you have seen in your days’ birdwatching.

Clarity, precision and economy are the keys to Ian Newton’s writing style – there aren’t flourishes or jokes in here.  But that doesn’t mean it is dull. Nature is so wonderful that a clear explanation of what happens, how it happens and why it happens is fascinating. And there are some great snippets, too.  Every time I hear or see a Treecreeper I will now remember that wood ants compete with them for food – Treecreepers do better when wood ants aren’t present.

Bird Populations by Ian Newton is published as a New Naturalist by William Collins and is available on Amazon as is Mark Avery’s Fighting for Birds.