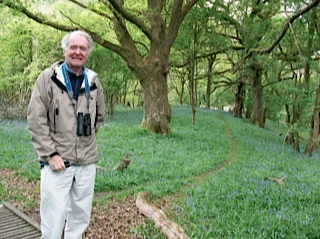 Colin Rees is a life-long birder/natural scientist and has devoted his entire career to conservation. He was Head of the Environment Unit of the Asian Development Bank (in Manila) and founding member and President of the Haribon Foundation for the Conservation of Natural Resources, the largest NGO in the Philippines. In 1988, he joined the World Bank where he was Division Chief with the Environment Department working on biodiversity conservation issues in over 80 countries.

I was born in the 40’s and grew up in the Vale of Glamorgan, taking every advantage of its exceptional rich rolling countryside. I spent my days exploring woodlands, hills and dales, ponds and the nearby coast. Spring migration abounded with birds, and habitats teemed with wildlife. Many a time I got up at dawn to enjoy the air pulsating with hundreds of singing birds. I travelled throughout the UK and grew to appreciate the diversity of its animals and plants and soul-satisfying landscapes. If there were hints that some species were in decline, there were compensatory gains, the return of avocets being the most celebrated.

With this view fixed in my mind, in the early 60s I left for United States and then Asia, returning for short visits. From time to time, I caught news of wildlife in trouble and the increasingly strident warnings of the conservation community. But it is only now that I am back to live here and visiting old haunts do I fully realize how much has been lost. Strolls in woodlands and grasslands are devoid of butterflies, and birds encountered regularly in my youth are few. Sadly, the “dawn chorus” no longer deserves its name. In the 50’s my ‘local patch’ was a walk along the edge of a woodland and my old notebook informs me that almost 40 species contributed to the chorus, including lapwings, curlews, nightjars, cuckoos, marsh tits, greenfinches and the like. It is very different now; just a few common birds sing in the hedgerows and the fields are devoid of breeding waders. But it’s the decline in number that’s the real shock: the volume of songs and their vibrant crescendos that I knew as a youngster no longer role across this land.

What I have experienced in my lifetime is profoundly disturbing and I feel that as a nation we are greatly diminished by our squandering of this treasure, this natural patrimony. Studies are clear: there is a comprehensive erosion of our wildlife. Landscapes have been homogenized and plants and animals uniformly assaulted and, sad-to-say, there is every expectation that this “blitzkrieging” of nature will accelerate. Books, nature magazines and country diaries may wax lyrical about Britain’s present day countryside, but little remains of its former wildlife.

Indicators of the scale of loss abound. Over the years, organizations such as the British Trust for Ornithology, Butterfly Conservation and many others have monitored the status of wildlife. They tell us that there was a rapid decline of plant and animal species at the end of the 1970s. More recent studies suggest that we are in the middle of another “tipping point” and about to face a mega-crisis in the life of our natural world. For example, The state of the UK’s birds 2013 indicates that the number of farmland birds, such as grey partridges, corn buntings and turtle doves are in free fall, the latter showing the greatest decrease of any species – 85% since 1995. The numbers of woodland species have also declined, with willow tits, lesser spotted woodpeckers and wood warblers (at 50%) suffering the most. Wetland and seabird populations are also in declining numbers.

Overall three-quarters of UK butterflies have shown a 10-year decrease in either their distribution or population levels. In 16 counties a plant species is lost every 1-2 years: Cambridgeshire has lost 120 species out of a native flora of 897 species (13%); and, Middlesex 146 species out of 816 (18%). Since World War II, hedgerows have been removed at a much faster rate than they have been planted. In some parts of the country 50% of hedgerows have gone, while others are so badly managed that their value to wildlife is much reduced

With this appalling state of affairs and almost certainly worse to come, why are the wildlife NGOs not taking to the barricades and declaring war on those who perpetrate such ecocide?? True, some are recipients of government or corporate finance, and so mute or soften their concerns. True some brave individuals attack the government for “greenwashing” and try to hold ministers accountable for their errant ways. But the unease grows and we are unlikely to see substantial change until a kaleidoscope of crises, worsened by climate change, force actions and then under the most daunting conditions.

So, fellow conservationists, we must scale up our actions to confront the biggest crisis in the nation’s history and assume the mantle of a crusade: join forces, find champions, agree hard-hitting campaigns, nurture and amplify the concerns of citizens and direct their anger at the constant betrayal of our political leaders. Demand government departments, district councils and others act on hard won scientific advice and make decisions favouring the recovery of the countryside.

Meantime, it should be the responsibility of each of us to reduce our cumulative impact on avian and other wildlife populations. For example, we should support regulations to control domestic cats — lethal hunters, killing at least 200 million mammals, 55 million birds and 10 million reptiles and amphibians a year in Britain and preying on a number of declining and endangered species. Every landscaper and home owner should plant native trees and shrubs preferred by our native birds and butterflies, rather than exotic species that are of little use to them. Forgo the use of pesticides. And finally, we must wean ourselves away from the vast biological wastelands called lawns that are now the major crop in suburban areas; they provide neither food nor shelter for the birds we wish to protect and should be replaced by herbs and shrubs to form water gardens and oases for wildlife.

The task we face will try our endurance, but can we doubt our cause? I end with a quote from Roger Tory Peterson, one of the Patron Saints of nature conservation:

‘I realize that we have got to fight like hell in the years to come and that most of us have been playing at conservation. I for one am going to become a very nasty fellow as the years go by because I see the disintegration in so many ways. We have got to be far more militant, and I am afraid that biologists as a whole have got to be a bit more aggressive from now on. The [people] who are destroying our world are very aggressive.’

Colin is the author of many scientific papers and co-author of Birds of the Philippines and Birds of a Feather:  Seasonal Changes on Both Sides of the Atlantic.

The Philippines: A Natural History is in press and A History of Cornish Ornithology is in preparation.

46 Replies to “Guest Blog – What life is this? by Colin Rees”