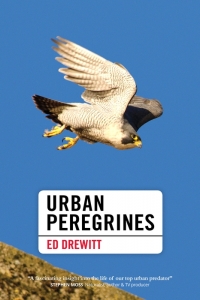 I like this book – it’s clearly written, has lots of interesting facts and some cracking images.

It took me a while to ‘get’ the cover – that road sign – you’re probably quicker than I am.

This is a good book about a bird which represents a conservation success story. Peregrines are much commoner now than they were when I was a lad – or even when Ed Drewitt was a lad.  I have seen a Peregrine fly over my Northamptonshire garden, which would have been almost inconceivable 40 years ago.  I bet nobody else noticed that bird, but many thousands of people see Peregrines in our towns and cities these days. I’ve seen Peregrines often in London – sometimes over the Houses of Parliament.

And this book is about those urban Peregrines that are enriching our lives – there must be some near you in Manchester, Derby, Bristol, Worcester, Exeter, Norwich, Chichester etc etc etc.  Look up and you may see one.

This book is probably pitched at those with less knowledge of birds than I have (but I still learned a lot because I am no Peregrine expert – unlike Ed Drewitt) – and there are lots of clear explanations, lots of facts and a chapter on myth-busting.

I particularly enjoyed learning about what Peregrines eat – almost anything that flies seems to be the quick answer.  Yes, they take lots of pigeons but they take a few of many other species. How frustrating for a birder to find out that if only he (for it most often will be a he) were sharper eyed, and could see in the dark too, he might have seen Roseate Terns over Exeter (the Peregrines there ate them!), Corncrakes over Derby (ditto!) or Little Grebes almost anywhere (ditto!). I do realise that Little Grebes must fly around to get from one water  body to another, but I’ve hardly ever seen a Little Grebe do anything that would be worthy of the name of flying, let alone get to any decent height and go somewhere – and that ‘s because they do it at night. Our street lighting and illuminated church buildings and office blocks, make it easier for Peregrines to catch nocturnal migrants these days (or rather, nights).

Ed is an experienced and thoughtful communicator and his ideas on that subject come out through the pages of this book too – and are worth reading.

This book has loads of excellent photographs and is beautifully produced.  If you like Peregrines then you ought to read it – and how can you not like Peregrines? So, read it!

Urban Peregrines by Ed Drewitt is published by Pelagic Publishing and is available from them, Amazon and lots of other places too, as is Fighting for Birds by Mark Avery (also published by Pelagic and also available from Amazon) and so will be Mark Avery’s A Message from Martha which is published in the UK on 17 July by Bloomsbury and can be pre-ordered from them or the Birdwatch bookshop or any other half-decent bookshop).