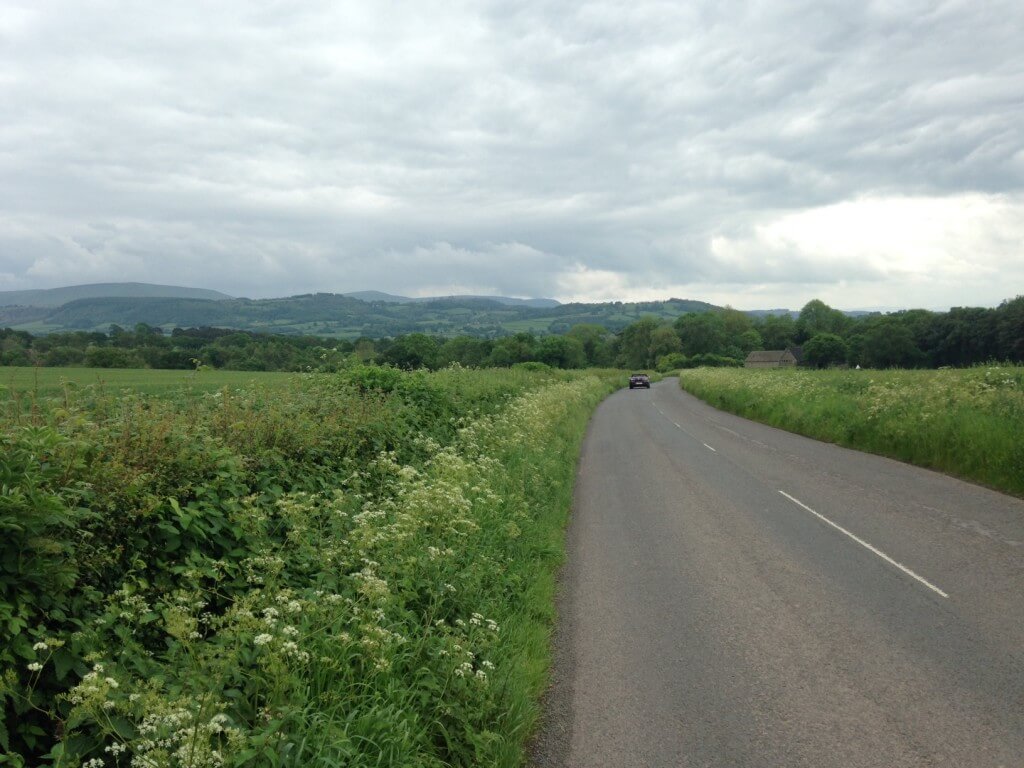 I enjoyed travelling over to Hay-on-Wye a few weeks ago to be a panellist on the Shared Planet programme that will be broadcast today at 1100 and next Monday (23 June at 9pm).

I’d never been to the Hay Festival, and I’d often wondered what it was like. I haven’t been to Hay-on-Wye for about 45 years, come to think of it.

I crossed into Herefordshire and was quite impressed by the county sign which said Herefordshire (as you might expect) but under the ‘Here’ it said ‘you can’ – quite clever (have a look here (you can)). I’m sure Pres Obama would approve.

Everything was green – the grass was green, the wheat was still green, the oil seed rape had lost its flowers and was green and the trees were green – it was a pleasant land too.  I’m glad I had the chance to visit Herefordshire.

As I approached Hay(-o-W) there was a toll bridge where I had to pay 80p – I had a brief chat to the man taking the money and mentioned the similar toll bridge on the outside of Eynsham, Oxon, where the toll is a mere 20p. He told me that the Eynsham Bridge toll raised £1.25m pa and used to be owned by the same people as his. He also said that these toll bridges were set up after the 30 years war by Pitt the Younger (but that doesn’t seem to make sense so maybe I heard that wrong!). I would have liked to have learned more, and got a bit more for my 80p, but I was now holding up other travellers so it was time to cover the last few miles.

Hay is quite pretty and today it was quite busy and quite muddy too. After covering the same ground three times (it’s not worth me telling you) I parked and got into the Festival.  First surprise – it’s free to get in to the Festival – you just walk in.

The Hay Festival wasn’t quite what I expected – it’s basically a load of posh tents with events happening in them.  So when I arrived there was an enormous queue of people waiting to hear Bear Grylls, including some very excited scoutlike-children who were very very excited.  So, you pay for the events (mostly) and you book them in advance (mostly) and that’s how you spend your time at Hay.  The events did look good – and I was going to be in one of them a bit later.

I had time to look around the few exhibitors present (there were many more exhibitionists). 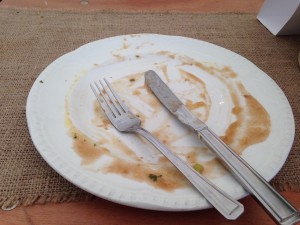 There were a few stands but not an awful lot to look at, but what I wanted to look at was lunch. I only thought to take a photo of my delicious sausage and mash after it had gone – but the photo shows that it was all entirely edible.

Shared Planet is presented by Monty Don and involves Kelvin Boot so I met them each for the first time.They were recording two programmes and I was in the second so I could watch the first which was about nature in literature (and included Anneliese Emmans Dean whose excellent book I reviewed on Sunday).

And then it was our turn.  Many of the audience disappeared homewards after seeing the first programme being recorded – I think they had wanted to see how it was done, and probably wanted to ‘twitch’ Monty Don and so, like twitchers seeing a rare bird, they moved on after their goal was accomplished.

Our programme was about new technology, like blogs and Twitter and apps and stuff, and how they may have changed the definition of a naturalist.  My fellow panellist was a young man called Alex Rhodes who must, now, be only days away from doing his A-Levels – good luck Alex!

We all, particularly Alex, Monty and Kelvin, said absolutely brilliant things, but I guarantee that when I listen to the programme I will think that all my best bits were cut out in the editing process –  you should have been there! But since you (probably) weren’t, you can listen at 11am this morning, or 9pm next Monday.

6 Replies to “Making Hay and a Shared Planet”