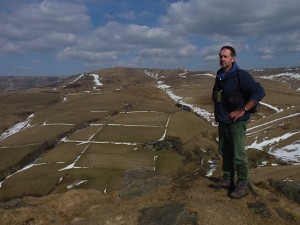 Tim Birch is the Conservation Manager of the Derbyshire Widlife Trust.  He has worked in nature conservation for many years, much of it abroad, but grew up in Derbyshire to which he has now returned.

It’s now been almost 18 months since I’ve been back in Derbyshire working with the Derbyshire Wildlife Trust as their conservation manager after many years of working on the frontline of global conservation issues.

From helping to fight the destruction of the rainforests from the Amazon to British Columbia, I’ve been lucky enough to meet some incredible people who are doing extraordinary things to try and protect our planet’s amazing biodiversity from being destroyed.

It was with a sigh of relief then that I came back to the Derbyshire moors where I grew up and tramped the moors with family and friends and where I could once again hear my first Cuckoo and see Lapwings tumbling in the sky to announce the arrival of spring.

At least things couldn’t be as bad as some of the truly desperate things that I had witnessed overseas in terms of environmental abuse. Or so I thought.

Over the past six months I’ve had my view of the Peak District uplands radically altered, as it’s clear that once you scratch below the surface, things aren’t quite right – in fact there is a festering sore.

It’s clear to me now why as a teenager in the Peak District, I was never lucky enough to spot Hen Harriers sky dancing on the moors – because they were and continue to be relentlessly persecuted by people who won’t tolerate these magnificent birds on their grouse moors.

Indeed, as I’ve discovered, the situation is actually far worse and extends far beyond the Derbyshire moors. It’s not just Hen Harriers that have been relentlessly pursued but other birds of prey including Peregrines and Goshawks.

Let’s not forget that these birds are legally protected and all this is happening within a National Park in a highly developed country – the UK – not the lawless Amazon frontier but right here, right now in one of our most spectacular landscapes in the heart of England.

I was recently lucky enough this Spring to spot a sky dancing male Hen Harrier in the Upper Derwent Valley, a very rare event indeed. High up on the moors it was performing its big dipper display flight, carving a breathtaking route across the evening sky – it was ghostly, even moth like and it was truly stunning.

A couple of days later a female appeared but then promptly “disappeared” or did it simply move on? That male then proceeded to sky dance for nearly six weeks without finding a mate.

Sadly, no breeding took place this year but it’s an indication that these spectacular birds want to re-occupy what is surely a traditional breeding area for them – they want to come home. They are as much a part of our national heritage as Westminster Abbey or Big Ben, but a small group of people are denying the opportunity for tens of thousands of visitors to the Peak District National Park to witness some of our most amazing wildlife.

This cannot be right.

Millions of people in the UK are members of wildlife and conservation groups whilst TV programmes like Spring Watch show the passion that people have for their wildlife. To my mind this is almost unrivalled anywhere in the world.

People want to see healthy birds of prey populations back on our uplands. The opportunities for ecotourism to showcase our thriving wildlife full of Hen Harriers, Peregrines, to name but a few species, is tremendously exciting. At the moment though this simply isn’t possible and the persecution of Hen Harriers to the point that we have none breeding in one of our premier National Parks is something that needs to be urgently addressed. It is a national disgrace.

I’ve met with many members of the public recently in the uplands of the Peak District National Park in the course of my work and when you explain that protected birds of prey aren’t able to breed in a National Park due to persecution every response is one of incredulity. How can that be happening in a National Park they say ?  Aren’t National Parks supposed to protect our precious wildlife ?

Like millions of people, I deeply care about the illegal hunting of elephants and rhinos in Africa as well as the illegal shooting of migrating birds in countries such as Malta. And like many people I also care about the on-going persecution of birds of prey in the Peak District and across the UK. Elephants, rhinos, Hen harriers – it’s all part of the same problem: a lack of respect for the natural world and the laws.

Despite this depressing scenario I now sense a growing movement of people who want to strengthen our links with the natural world and restore it – not destroy it. This is why I and the Derbyshire Wildlife Trust will be supporting the Hen Harrier Day on August 10th in the Peak District.

We gained the right to access our uplands with the mass trespasses of the early 20th Century in the Peak District – we led the way in this part of the UK. Now we need a mass movement of people to show the way again and reclaim our natural heritage on these uplands. Our Hen Harriers, and other upland wildlife desperately need our help. I hope to see many of you there.