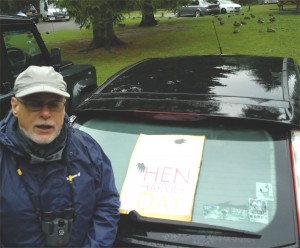 I and a colleague, who does much work for the Essex Wildlife Trust, attended the ‘Hen Harrier Day’ protest event on Sunday, at Derwent Water in the Peak District. It was heartening to mingle with so many like-minded folk who are appalled at the persecution of raptors across the grouse moors. And even more dismayed that the hunting and shooting fraternity has not attempted to reach a compromise on the issue.

Bertha’s stair rods did not dampen our spirits but seemed to add emphasis to the resolve. In the face of adversity as it were!

I know I speak for a lot of us when I say,

Keep the pressure up!

The Blood and the Purple ~

In a habitat of raw elements

Squalls sweep by in chilled flurries

Across the ridges and carved valleys

All along the waving folds of Calluna

Thrives the bilberry and the sundew

And the upland ways of wild things

A theatre for a Circus turn

Soars adeptly in his cyaneus livery

The laws of physics surpassed!

Skydancing above the purple haze!

On the killing ground of the driven

Trodden in and stamped upon

Lay crushed by whim and profit!

The budding dance troupe no more

In the blood and the purple

Do they not acknowledge our treasure?

The phrase ‘purple haze’ was first used by Charles Dickens in 1861 in ‘Great Expectations’.

And later re-penned by Jimi Hendrix.