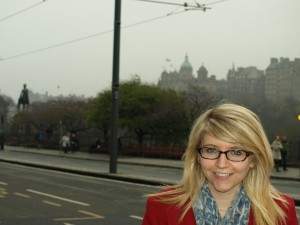 Emma Websdale is a Conservation Biologist and Writer. Working as the Communications Support Officer for The Wildlife Trusts, she is particularly motivated in engaging younger audiences, helping them make sure that nature doesn’t drop off their agenda.

After spending the day of 9 December stewarding people to march and rally for nature in Westminster (alongside The Wildlife Trusts, RSPB, The League Against Cruel Sports and Mark Avery) – I was left feeling rather proud. Not only was I part of it, but also I witnessed the faces of many people filled with pride. For many of them there that Tuesday was the first time they’d even spoken to an MP, or had taken a stand for nature altogether. I was proud of them all and it made me smile relentlessly.

Now, hopefully, you’ll appreciate my frustration at what happened next. Travelling home after the busy day on an over-packed train to Newark, I read something that temporarily put out my fire – page 49 of the November issue of BBC Wildlife Magazine. The article was about coffee and the implications it was having on the rainforest.

I was already aware of the destructive processes inflicted on the rainforest to feed our appetites for coffee, tea, palm oil and tobacco (alongside many other products)… but it was a stand-alone figure that really said it all; 6.45cm2 – ‘roughly the amount of rainforest that is chopped down for every cup of coffee consumed’. What? Just for one cup of coffee? I guessed the area of 6.45 cm2 with my hands, measuring it out in front of me, and then tripled that distance to reflect the three cups of coffee I’d consumed that day. Knowing I had removed that much of the rainforest in just one day was appalling. I then pictured this distance increasing by seven to cater for a week’s worth of coffee drinking, and then multiplied this by four to reflect the month, and then again by twelve to cover off the year’s worth.

Now according to East Coast Midlands website, the train carriage was 27 meters, or 2,700cm long. My yearly coffee consumption had totalled to 6,501cm2 – a centimetre-wide strip stretching for over two and a half carriages. The thought of losing that much rainforest so I could luxuriate in a quick caffeine fix disgusted me. And that was in just a year. And to be honest, that size was easily an underestimation as some days I could easily drink up to seven cups of coffee. It really opened my eyes to a never-ending battle. Yes, I’d helped people take action for nature that day, but here I also was personally undoing and removing the rainforest ecosystem. The same ecosystem that supports over 50% of the Earth’s plants and animals. I felt extremely irritated and embarrassed.

Admittedly, I’ve always been conscious about where my coffee comes from – and have always tried to ensure that the familiar green frog which indicates ‘rainforest alliance certified’ was on my coffee cup – but little did I know, that the frog icon didn’t necessarily guarantee that the coffee had been grown in the best way possible for the environment. Now, don’t get me wrong – to consume rainforest alliance products isn’t all that bad – the non-profit organisation does a great job in working with farmers and foresters to cultivate their crops in a more environmentally-friendly way, but in my own mind, this was no longer enough. I now wanted to go for the even better stuff – BBC Wildlife recommended coffee that had ‘been grown organically and under shade’.

This means that Coffee (Coffea sp.) – a small understory tree or shrub – has been grown amongst forest trees, in the shade. A once common tradition, growing coffee under shade was proven to discourage weed growth, protect the crop from frost, and most importantly, help increase the number of pollinators which resulted in better fruit set. So why are we no longer doing it?

Like everything else in the world, our insatiable demands for products including caffeine are at an explosive amount. This means that the long-time taken for the coffee to ripen under shaded canopy was no longer meeting demands. Instead, in order to produce faster, higher yields, many coffee plantations began to grow coffee in sunnier conditions – where trees were chopped down to reduce shade. As a result, we get coffee in higher and faster amounts, but also, many studies have proven that biodiversity has declined within these areas.

Fortunately, suppliers that are more environmentally conscious and switched on are still encouraging these older traditions and a few are mentioned in the article – Marley Coffee, Puro Coffee, Bird & Wild and Cafeology – all suppliers that are ‘wildlife-friendly’.

A tip from me after researching all of the different coffee-growing techniques is to really push and look for ‘rustic shade-grown’ coffee. This means that the coffee has been grown on a small family farm, in the existing forest with little alteration of native vegetation. As a result, tree species are kept diverse, which on average, provides more habitats for birds, supporting over 25 species. Even better, protecting these forest-like conditions provides soil protection, erosion control, carbon sequestration, natural pest control, and improved pollination, making such systems vital for conservation initiatives. I feel much happier with that compared to the two and a half train carriages I was previously removing.

My initial irritation at the article had now turned to positivity. Yes – fighting for the environment is an extremely complicated dilemma. Just when you think you’re doing one thing right you’re soon confronted by an action that is negatively influencing the natural world – whether it be where your clothes, food or energy comes from. But, just remember – there will always be ethical suppliers and thinkers way ahead of the game – setting good examples and principles to not only preserve our remaining biodiversity but to also enhance it. All you need to do is stop and think a little more about it. Thanks to educational resources including BBC Wildlife and clearer packaging guidelines, it’s getting easier for us to be more environmentally aware.

I know when I next crave a dose of caffeine; I will stop and question whether I even need it altogether.

Note added by Mark: for another Guest Blog on sustainable coffee see this one by Derek Thomas from May this year.