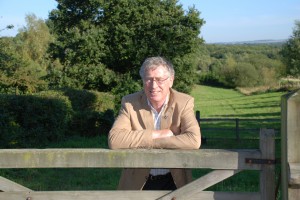 Educated at Imperial College London, Derek Thomas (@Coffeewarblers ) spent his professional life as a mathematician, but has also had a lifelong interest and involvement in natural history. Now retired, he is fully occupied as a nature conservationist. He has served at a local and national level in many guises with a variety of organisations including The Royal Society for the Protection of Birds, The British Trust for Ornithology and The Royal Society of Wildlife Trusts. Recently retired as Chairman of Wildlife Trusts Wales he continues to work at a national level in the UK. Passionate about rainforests, Derek is presently the UK representative for the Smithsonian Institution’s Bird Friendly Coffee Programme and is engaged in an educational campaign to promote shade-grown coffee in the UK.

Coffee is the second most traded commodity in the world after oil. It’s estimated that about 30,000 cups of coffee are consumed on the planet every second, and that we produce in excess of 5 million tons worldwide each year. Have you ever stopped to think of what effect this huge trade might be having on the environment and our carbon footprint?

The Ethiopian highlands are the home of coffee, and it still grows there naturally under the shade of tropical forests. First discovered there over 1,000 years ago, it was eventually taken to Asia by the Dutch, and first cultivated in Latin American in the 18th century. It is now grown in over 50 countries throughout the tropics.

Over the last few decades, economic and social pressures have forced farmers worldwide to increase the productivity and yield of coffee shrubs and individual farms. This ‘technification’ of coffee farming, which replaced traditional shade-grown methods with sun-cultivated monocultures, resulted in for example over 2.5 million acres of forests in Central America being destroyed in the last 20 years. This caused an immediate loss in biodiversity, both in the many types of trees and plants that were eliminated, but also in the animals that depended upon them. It also had the effect of reducing the essential absorption effect of carbon dioxide by the felled trees. Thus instead of the original shade-grown wildlife-friendly arabica variety, most coffee in your local supermarket will be of the modern sun-grown robusta variety.

What about Fair Trade coffee, surely this is OK? Well it’s not quite as simple as that. Fair Trade products, as the name implies, guarantee a fair price to the producer irrespective of the variation in the market value of their goods. This can mean that some Fair Trade coffee is grown in an environmentally-friendly way and some may even be shade-grown. Look in your local store, find the Fair Trade logo and read carefully the information on the package. It will typically tell you that the contents are Fair Trade, but will usually have little or no detailed reference to the environment.

Other varieties are labelled ‘organically grown’ and you will find this claim on many Fair Trade coffees. A label to look out for in the UK is that of the Soil Association. This organisation, as the name suggests, promotes coffees that have been grown in a sustainable way, using the minimum of fertilisers and herbicides, thus keeping the land in better shape. This is of course to be welcomed, but still you will usually find no reference to shade-grown coffee and the certification does allow for some fertilisers to be used.

Coffees which have the Rainforest Alliance logo (a little green frog), are everywhere. This is an American organisation, now working in over 50 countries. It works towards conserving biodiversity and ensuring sustainable livelihoods by transforming land-use practices, business practices and consumer behaviour. There’s a chance that a coffee with the Rainforest Alliance seal of approval could be shade-grown, but look very carefully at the small print and decide how environmentally friendly the coffee inside really is. Many rainforest coffees are not even organically grown.

In North America the issue of shade-grown coffee is well known and you will find many varieties on sale in many supermarkets and grocery stores. One reason for this awareness lies in the recent decline of North American Neotropical migrants. These are birds that breed in North America and winter in Central and South America. Many of these species, in particular warblers, have undergone dramatic declines in the last couple of decades, and one of the major factors has been the decimation of their wintering forest habitats in the tropics, including shade-grown coffee plantations. Huge areas of forests have been cleared, or fragmented for timber, but also for agriculture, and coffee production on this land has been a very big factor. 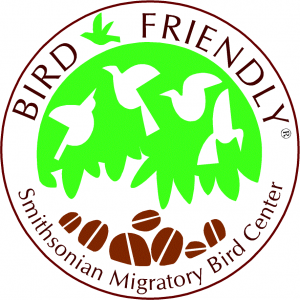 The Migratory Bird Centre at The Smithsonian Institution in Washington DC has undertaken a great deal of research over more than 20 years into the effects of coffee growing on the environment, and in particular on Neotropical migrants, and has developed a system of sourcing and certifying shade-grown organic coffees. Their logo can be found on many coffees in supermarkets throughout the USA, Japan and sales are gradually taking off in Europe.

We must be very careful about what we consider as shade. It can range from just a few banana trees, to original rainforest. The Smithsonian Bird Friendly certification guarantees that the coffee is grown under sufficient shade to replicate as near as possible rainforest biodiversity, and that it is certified organic by an internationally recognised organisation. The Smithsonian’s website is packed with lots of interesting information and is certainly worth visiting.

At last, the Smithsonian’s ‘Bird Friendly’ coffee is available in the UK and can be purchased via the RSPB’s website and a few independent retailers. It’s the only triple certified coffee in the world – organic, Fair Trade and shade-grown with enough shade to satisfy strict biodiversity standards. The certification is considered by the coffee industry as the ‘Gold Standard’.

So what about our migrating birds? Most of our small migratory birds winter in the African savannahs and not in Latin American forests, so we don’t have the same problem. This kind of parochial argument doesn’t hold water in the light of our current global ecological problems. We drink lots of coffee in the UK; we must think about the planet and in particular about rainforests. At the end of the day, coffee is all about forests!

So, next time you buy coffee, take a little time for research. Almost all coffee sold in jars, is sun-grown and blended (keep away from jars and blends, you have no control on their contents!). Look at the origin of the coffees in your local supermarket. The majority are from Latin America, with some from Africa and Southeast Asia. There are virtually no logos which guarantees the coffee is both shade-grown and organic. However if you look very carefully at the small print, you may find a reference to shade coffee. For example, some coffees from Ethiopia are shade-grown and I have recently found one from Cuba and Ecuador. Indian coffee is also a good bet as most appears to be grown in the shade.

Best of all is to ask shopkeepers to stock shade-grown organic coffee – they’ll probably look confused!

Demanding and buying shade-grown organic coffee is just one more example of how we can each make a difference, and it’s the combined effect of all of us that will strengthen our crusade to save the planet.

I’m working with the Smithsonian to try to introduce the message of shade-grown organic coffee into the UK and am gradually winning. But we also need to inform the public here about the damage most coffees are having on the environment. Please spread the word!

Finally, I believe that shade coffee tastes better. It is certainly beats the instant stuff (we call this coffee!). It also makes breakfast a nicer experience, knowing that you’re doing your bit for the planet and enjoying a really good cup of coffee in the bargain.

28 Replies to “Guest Blog – How environmentally friendly is your cup of coffee? by Derek Thomas”