Mark writes: this was originally posted as a comment on yesterday’s Guest Blog by Tim Bidie but it seemed so good to me (and so long) that it might  be better to publish it this way. 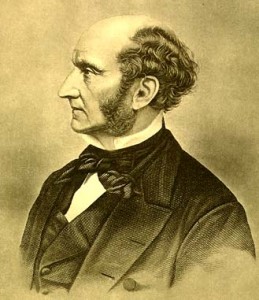 John Stuart Mill, (20 May 1806 – 8 May 1873) was a British philosopher, political economist and civil servant. He was an influential contributor to social theory, political theory and political economy. He has been called “the most influential English-speaking philosopher of the nineteenth century”. Mill’s conception of liberty justified the freedom of the individual in opposition to unlimited state control. (from Wikipedia)

I don’t often comment on these internet places, what with having been dead for 140-odd years, but I was surprised to find myself quoted in this blog post. “Misappropriated” may be a more apposite word.

I am always a bit narked when people quote my principle of the “Tyranny of the Majority” when trying to justify often indefensible minority interests. It’s funny how that happens. I have recently been working, from my grave in a pleasant part of Avignon, on a new principle. It is called “The Tyranny of the Internet Quote” and it refers to the common practice of justifying any old argument through the lazy practice of copying quotes off the internet and using in a way that is both misleading and far removed from their original context.

I would like to remind you that I devised the Tyranny of the Majority as a philosophical conundrum, to which I also offered a solution. My solution to the problem of exactly when it is, and is not, right to interfere with individual liberty is delivered by way of my ‘harm principle’:

“The sole end for which mankind are warranted, individually or collectively, in interfering with the liberty of action of any of their number, is self protection. That the only purpose for which power can be rightfully exercised over any member of a civilised community, against his will, is to prevent harm to others.”

When I talk about harm to others, you can reasonably assume this to include harm to animals.

“Nothing is more natural to human beings, nor, up to a certain point in cultivation, more universal, than to estimate the pleasures and pains of others as deserving of regard exactly in proportion to their likeness to ourselves. … Granted that any practice causes more pain to animals than it gives pleasure to man; is that practice moral or immoral? And if, exactly in proportion as human beings raise their heads out of the slough of selfishness, they do not with one voice answer ‘immoral,’ let the morality of the principle of utility be for ever condemned.”

I have also said:

“It is by the grossest misunderstanding of the principles of Liberty, that the infliction of exemplary punishment on ruffianism practised towards these defenceless beings has been treated as a meddling by Government with things beyond its province – an interference with domestic life. The domestic life of domestic tyrants is one of the things which it is the most imperative on the Law to interfere with. And it is to be regretted that metaphysical scruples, respecting the nature and source of the authority of governments, should induce many warm supporters of laws against cruelty to the lower animals to seek for justification of such laws in the incidental consequences of the indulgence of ferocious habits to the interest of human beings, rather than in the intrinsic merits of the thing itself.”

You people are obviously familiar with google. Why not google my name in connection with “animal rights” and you will quickly understand why I am horrified to find myself quoted in support of the arguments made here?

Going back to being dead now…laters x