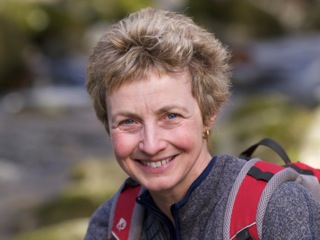 Mary Colwell-Hector is an award winning radio, TV and internet producer winning 14 awards over the last 8 years, including a Sony Gold in 2009.

She is also a radio presenter and feature writer for The Tablet.  She has produced natural history series such as Saving Species on Radio 4 and was the lead producer for the Radio 4 series Shared Planet which has just come to an end.

Her excellent biography of John Muir was reviewed on this blog.

The only programme on the BBC purely dedicated to wildlife conservation, Shared Planet, came to an end in January. It was a long haul – 60 episodes over 2 years – signalling a major commitment from Radio4 to place this topic on the national agenda. The presenter, Monty Don, was joined each week by science journalist Kelvin Boot. Each week Shared Planet got 1.4 million listens, about a million for the origination at 11.00 on Tuesday mornings and another 400,000 for the repeat on the following Monday evening at 9.00. That is a lot of people tuning in to hear about the major issues affecting the natural world around the globe.

What we hoped to achieve was a fresh look, drawing on ideas from different disciplines and giving the audience an in-depth look at whatever was the chosen topic of the programme. Monty provided a thoughtful, intelligent anchor, Kelvin the science, facts and figures. The first one, broadcast in June 2013, featured Robert May and many prestigious thinkers, scientists and activists followed, either in the studio or down lines; young Mark Avery was one of them of course. We were honoured to interview a whole host of fascinating, inspiring people; some well known names included George Monbiot, Jonathan Porritt, Tony Juniper, Bill Sutherland, David Macdonald, Iain Douglas Hamilton, Tim Birkhead, Sylvia Earle – and a host of others from all over the world and in all areas of natural history. Not everyone was “well known” but all were at the top of their game and contributing high quality science and analysis. We also interviewed Patrick Barkham in our programme on literature and Bishop James Jones in a programme on religion. We branched out into psychology, sociology, political science and anthropology in other episodes.

The first programme grabbed the bull by the horns and looked at how population growth is severely affecting many species. The field-based interview with Prof Margaret Rubega from the Uni of Connecticut on why bother to save the chimney swift is still, I think, the best interview of the series. Here is a short clip.

She herself describes these once common birds as “drab flying cigars, unmelodic, they won’t go to bird feeders or sit still for a photo and they glue their nests together with spit.” So why, asked interviewer Howard Stableford, are they worth saving? Rubega’s answer is a joy and sums up what we hope was the raison-d’etre of the Shared Planet series. Not only are chimney swifts worth saving because they are simply amazing creatures in their own right, but also because we are collectively playing a game of Jenga with nature. Jenga is a children’s game where a tower is built of blocks and the players take it in turns to pull them out – until the whole thing collapses. Rubega said we are all taking it in turns to pull the blocks out of the tower of species that share this planet with us. It seems like there is no effect as the tower still seems to stand, even though species go extinct, but eventually we pull out one block too many and suddenly the tower collapses. A fun children’s game, a deadly and distressing consequence for humanity’s ability to live on planet earth. The “Jenga effect,” as it has stuck in my mind, is a simple and powerful analogy for our assault on the natural world.

I particularly like this interview because Margaret Rubega is fun and upbeat yet her message is serious. She encapsulates the situation we face with easy to grasp images. Further on in the interview she says the current situation is like living in a street and each day you go out and see your neighbours going about their business. But then slowly, year after year, you notice that they are thinning out. There are fewer people around to say hello to and houses are empty. One day, you realise you are the only one left in the street. A lonely, stark image, resonating with E O Wilson’s prediction of humanity entering the Age of Loneliness.

Looking back through the website (you can listen to all the programmes on there) I think we had a good go at covering the ground. Subjects ranged from how to live with carnivores, to the health of soils, to coral reefs and climate change, to the future of national parks, to marine protection, to the benefit of long term studies and so on. Have a look at the list, I hope there is something there for everyone. And as in any long running series some programmes worked better than others. None though were, in my opinion, bad programmes and all were an honest attempt to present complex issues to a wide audience.

Judging by the emails, tweets or letters we received from all over the world all the subjects got people thinking. Programmes like plastics and seabirds, the health of soils, how to manage the growing number of deer, the monetisation of nature and the role of religion got people writing reams – as did our look at wildlife conflict.

Many people reading this blog I know were unhappy about that episode (see here and here, and read the comments), and expressed it in no uncertain terms. We got complaints from all sides! Suffice to say it was not a programme on the hen harrier situation as such, rather a look at how to deal with entrenched conflict in a new way by learning lessons from political science. I’d like to thank everyone who did contact us, with good or bad comments, everything was read and caused a lot of internal discussion. The response showed just how important it is we find a way through the increasing problems caused as people and wildlife come head to head (or more commonly, people and people coming into conflict over wildlife).

Shared Planet is being replaced with a new series called the History of Natural History which will look at specific objects in the Natural History Museum in London and trace their contribution to our culture and heritage – as well as look to the future. It is not specifically a conservations series but it will certainly come into it. We hope it will deepen our understanding of the role that nature plays in society, in the past present and the future, and that can only be a positive contribution to the growing national conversation on the importance of protecting the natural world.

If you enjoyed Shared Planet I hope you like History of Natural History. If you wrote in thank you and please keep listening, Radio 4 is a national treasure and an important place for complex, challenging issues to be discussed.