Skip to content
The days are increasing in length, although there is plenty of winter to come. Last Saturday was the first day since 2 December when the official day length was over eight hours where I live. 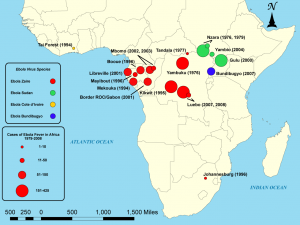 Our Cuckoos, on which I keep an eye through the excellent BTO study of them, are sitting in central Africa in the areas which historically have been Ebola hotspots.

There they will stay, for the next couple of months, probably, if they behave as they have done in previous years (but, we will see!), before heading to West Africa and some of the areas which are suffering from the ravages of the current West African outbreak of the disease.

By the time that we reach the spring equinox on 21 March (and the first ever BAWC conference on that day; day length just over 12 hours) our Cuckoos will be thinking (I wonder what they do think) about moving north again but they won’t head off, probably (we shall see!), until about the time of the Grand National in early April (day length over 13.5 hours) when we will already be getting bored and irritated (will we? we shall see!) by politicians in the general election campaign.

In the first week of May most of our Cuckoos will be back with us, the day length will be over 15 hours and Ebola will be under control (will it? we shall see!).

It’s almost as though our Cuckoos are coming back to vote.  I wonder how their global perspective, of (if they have been paying attention on their travels), differing cultures, differing religions, poverty and wealth, deserts and wetlands, rainforests and European agriculture, and a wealth of biodiversity, would affect their voting decisions. Is Stanley rushing back to vote for Liz Truss in southwest Norfolk or will he switch to UKIP? Will David be voting Plaid Cymru? Is Livingstone wondering whether to support Lib Dem former leader Charles Kennedy, or to switch to the SNP?

Or maybe ‘our’ Cuckoos aren’t the least bit interested in any of that and are coming back to vote in David Lindo’s vote for the national bird – maybe they are hoping we are all going to vote Cuckoo! And according to the opinion polls, many of us will!

4 Replies to “Returning to vote?”