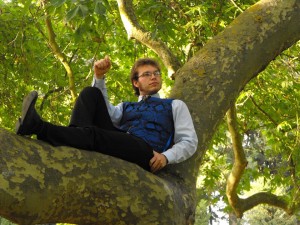 James Harding-Morris is a primary school teacher who currently works as the Schools’ Project Coordinator for the RSPB. Despite having no qualifications in conservation, ecology or similar, he persists in spending his days getting over-excited about wildlife and trying to encourage other people to feel the same. He can found on Twitter @UKSnailTrail.

I think it is probably a well documented fact that birds are a gateway group that slowly encourages people to appreciate other areas of the spectrum of British wildlife. Usually after birds comes the butterflies, because, well, you need something to look at during the summer don’t you? Butterflies can then lead onto dragonflies or, for the totally ensnared, the incredible diversity of moths that our cold, northern islands hold. Then, after a few years, comes the orchids. Before you know it, you’ve accidently become a well-rounded naturalist. It’s a pathway that Mark Avery seems to be traversing at present.

I neglected to follow this path myself. I got into butterflies before anything else, then moths, then birds. I still enjoy all three, but my interest has turned more recently to neglected groups. I think there are groups of organisms that are unfairly neglected; species that are common, relatively easy to identify and that deserve more attention.

That is why, during 2015, I am attempting to see every single land snail in the UK. That’s about 115 species – a decent list, more challenging than butterflies or dragonflies and arguably more manageable than birds.

So far this year I have seen 13 species, which is a decent start, I think. If I can get that many every month I’ll easily manage it. Here are a few of my favourite species that I’ve seen so far:

Vallonia costata, The Ribbed Grass Snail (or, rarely, the Costate Vallonia)
The genus Vallonia comprises three species in the UK, of which I have found V. costata the most common/easiest to find, as well as the most distinctive of the group. The UK Vallonia species are a pleasant whitish-ivory colour, and all are under 3mm fully grown. Fresh, mature and unworn V. costata can be easily distinguished from the others due to the stout ribbing of the shell. In fact the specific name – costata – comes from the Latin ‘costa’ meaning ‘rib’. ‘Vallonia’ apparently comes from the Latin for ‘from the vale’ or ‘shallow valley’, presumably as a reference to the grassy habitats where this genus can be found.

V. costata is a species of calcareous grassland; usually dry in my experience. The most reliable spot I know for the species is in Potton churchyard, Bedfordshire, where I find it commonly on top of a particular tomb – I imagine the stonework is calcium-rich. The photo below has been the most popular photo I have yet shared on Twitter; I think people appreciate a sense of scale when dealing with very small species. 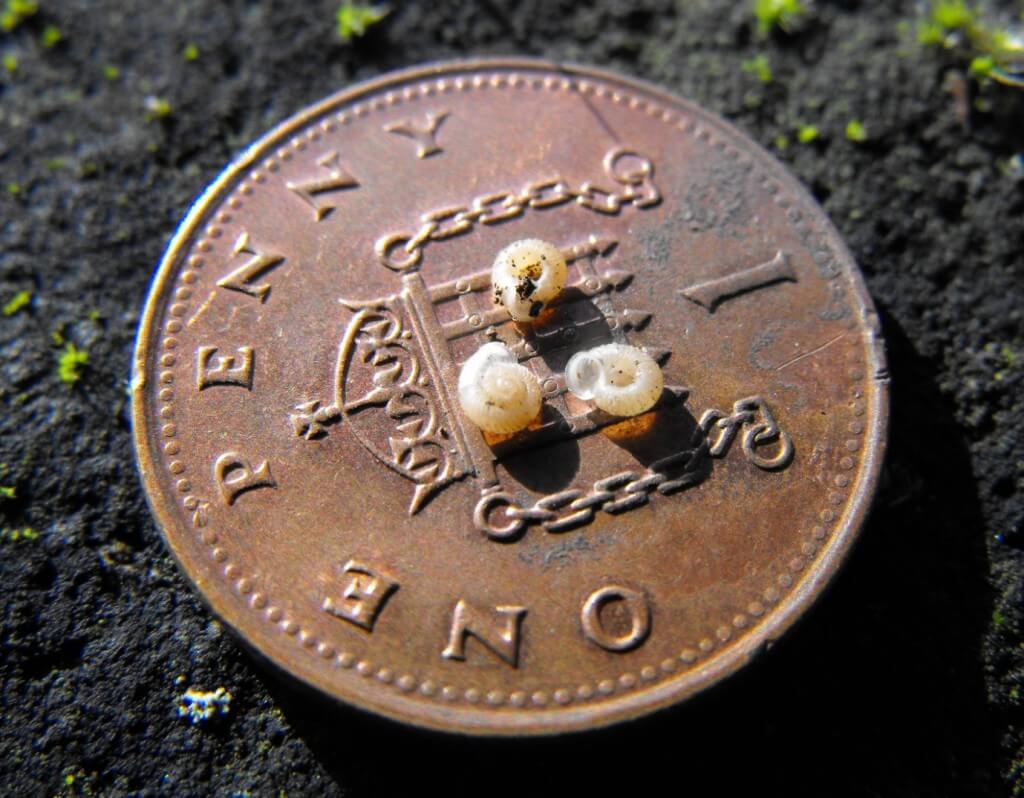 Hygromia cinctella, the Girdled Snail
This species was kindly shown to me by Africa Gomez of @abugblog in the Pearson Park Wildlife Garden in Hull. This snail has a distinctively patterned and shaped snail. It has the form of a very shallow cone, with a rounded base, and is marked with a white line that encircles, or ‘girdles’, the shell. This white line follows a sharp ridge or ‘keel’ that runs around the shell and, combined, these features make it an easy species to distinguish. Maximum width of shell is 12mm. 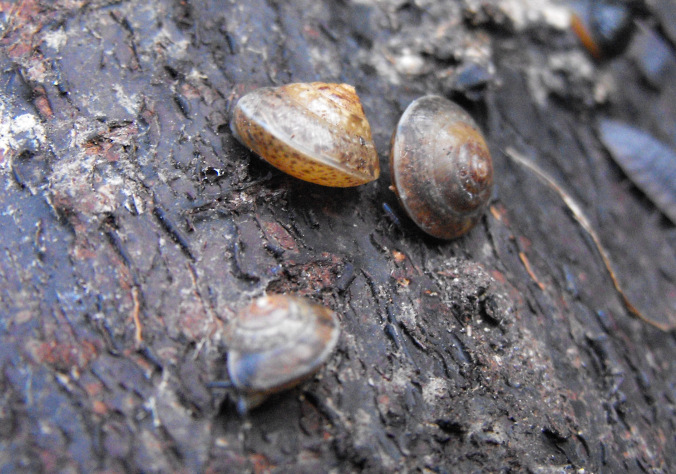 The Girdled Snail is a non-native species; first described in Britain in 1950 by Alexander Comfort – author of The Joy of Sex. There are, however, records of this species that extend back to 1945 but were misidentified at the time as being Hygromia limbata. The species remained fairly restricted to the south-west until the 1970’s, at which point it began to expand dramatically, being recorded in Scotland for the first time in 2008. The Girdled Snail is native to the Mediterranean region and it surprises me how well it seems to cope – and thrive – in the UK. 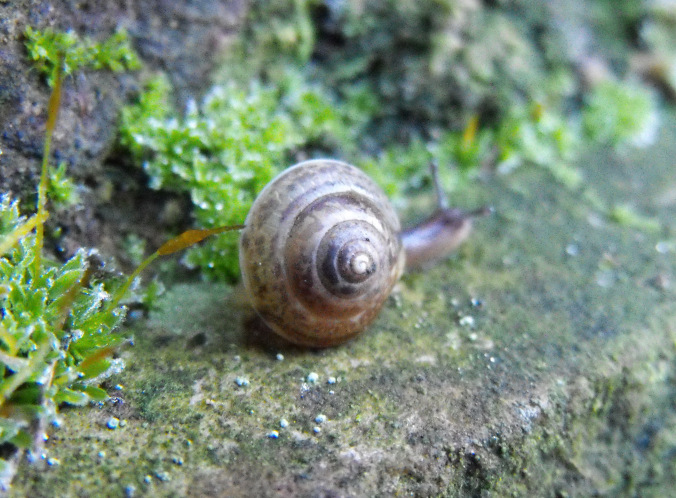 Africa pointed out to me that the Wikipedia article on Girdled Snail was a ‘stub’; an incomplete article with less than 500 words. Working together, we updated and improved the text on the page, and Africa added some of her own photos. View our success here!

Truncatellina cylindrica, the Cylindrical Whorl Snail
This species is one of the rarest in Britain. It used to be known from areas across England and Scotland, but is now found at only three sites, one in Yorkshire, one in Norfolk and one in Bedfordshire.

Handily, I live five minutes away from the Bedfordshire site which comprises a verge between the boundary wall of Potton Church and the road. Here is the ‘site’: 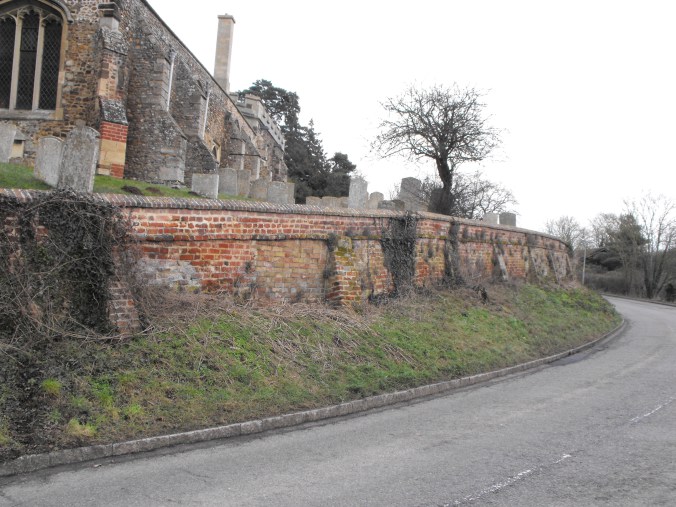 A rather limited area, don’t you think? And, in addition to that, the snail is apparently only found within 30cm of the base of the wall – presumably relying on the calcium from the lime mortar that holds the wall together.

The snail is also very little. Extremely wee. Positively minute. It grows to an absolute maximum of 2mm tall, but is usually smaller, with a maximum width of 0.9mm. To find the snail I collected a specimen tube worth of soil from the very base of the wall. I was wary of damaging the site and so only took the single sample, comprising about 5ml of material. I took this home and tipped it onto a white plate. Then, using a cocktail stick, I carefully, bit by bit, moved particles of soil from one side of the plate to the other. A success came quite early on as I soon discovered an old, empty shell of my target species. I carefully transferred it to a specimen tube. Then followed a long period of a calm before I found two living juvenile shells within minutes of each other. The first was fresh but empty, but the second held a living individual. Success! The rest of my sample yielded only another old broken shell, but I was delighted by my success – four shells, two living, from 5ml of soil.
Unfortunately, the snails were too small for me to capture with any clarity using my camera, so I was forced to beg around at work for assistance. Luckily a colleague, @aspeciesaday, obliged and took these marvellous photos: 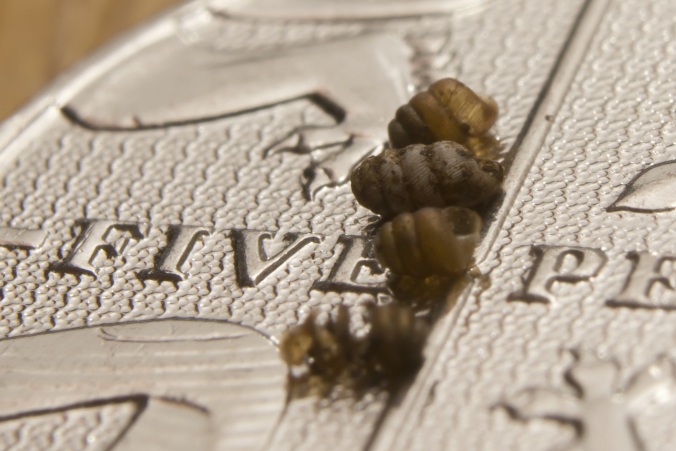 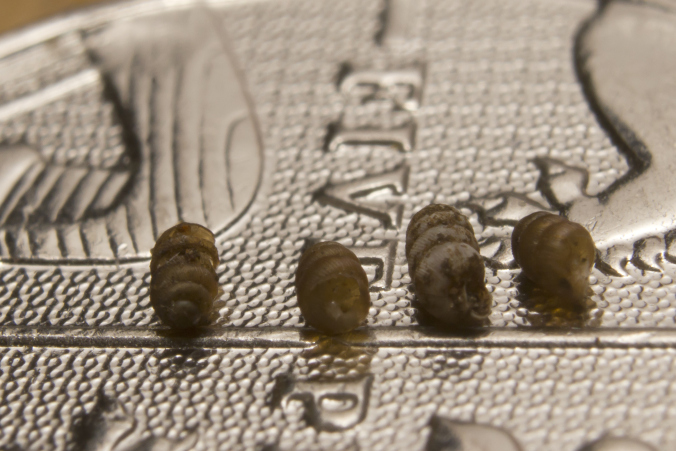 Those are just three of the species I have seen so far this year. The rest of the British fauna contains even more marvellous variations on the form.

I am cataloguing my quest on Twitter @UKSnailTrail and via my blog. Please follow to be kept up to date on my quest, for snail news or if you have snail-related questions in need of answering.