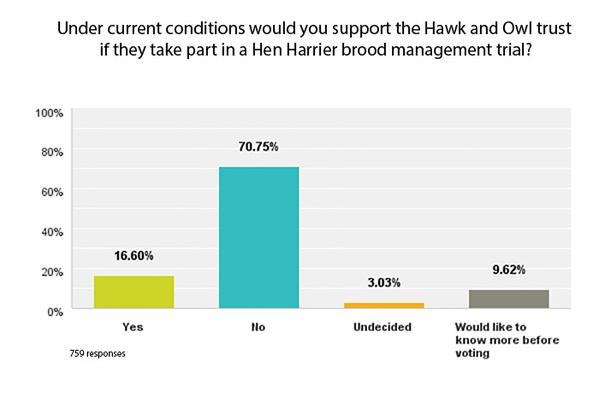 Rare Bird Alert asked people, any people (but over 750 people), to express their views on whether they would support the Hawk and Owl Trust in taking part in a brood management trial. Do have a look at the selection of comments on the Rare Bird Alert website too.

Only one in six people agree with the position of the Hawk and Owl Trust as far as it is known and understood at the moment. This should be a sobering finding for the Hawk and Owl Trust’s Chairman, Philip Merricks, who has been so keen on this idea, and also for the other trustees who are said to be right behind this proposal too. 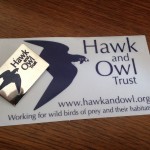 It is up to the H&OT what they do.  And I would be the last person to put someone off doing what they believe is right just because it might be unpopular, but in this case, it appears, there is no ‘might’ about it.

I’m not sure I ever saw any similar type of information (I guess none existed) when the RSPB took the most unpopular decision that I can ever remember it taking – to support a cull of Ruddy Ducks in the UK (see pages 72-74 of Fighting for Birds) but I would be amazed, totally amazed, if the feelings had been anything like as opposed as they appear to be over the H&OT’s position, as agreed by its trustees.

But I am more interested in Defra’s position. Going back a couple of weeks to a blog I wrote saying that Defra might have one more bad decision left in it before the general election, this poll certainly would indicate that it would be a ‘brave move, minister’, for the Secretary of State to put her head above the parapet, so close to a general election, on this subject.

Only if Tory ministers wish to curry favour with rich Tory, grouse-shooting, voters would it make any sense at all for Defra to show any interest in brood management when the raptor workers on the ground, and the RSPB on the ground and, I hope, buzzing around the ears of Defra ministers, are against this proposal as it stands. And remember, it hasn’t been published by Defra, and it hasn’t been out to consultation.

I don’t know why I should give advice to Defra ministers and civil servants, but if I were them, I might put the brood management proposal, if it is written down and agreed by GWCT, Moorland Association, BASC, NGO and, it seems. Hawk and Owl Trust, out to consultation as the RSPB suggested. You never know, we might like it more when we see it than when Philip Merricks can’t explain it, and when Andrew Gilruth can’t be bothered to explain it.  And a consultation is never a bad thing.

After the general election, who knows what position we will all be in – I’m not predicting anything – and we can all start again.

Thank you to Rare Bird Alert for setting up this poll. Nice one!  We can be sure that the H&OT trustees will find it helpful next week in working out their way forward.