Stuart Housden writes: On 21st April 1945, seventy years ago, Derek Ratcliffe climbed to his first peregrine’s nest in the north Pennines. He was then a schoolboy at Carlisle Grammar School, but described that day in his memoir In Search of Nature as his ‘red letter day’. In fact, he was almost killed, as the nest was in a fearsome precipice, but undeterred, a month later he was in the Lakeland fells where he located three more peregrine nests. After much searching in the field and scouring the scattered literature, Derek concluded that the Lake District had, in the late 1940s, about 30 pairs of peregrines as well as 70 pairs of ravens.

Two years later, aged just 18, Derek published his first essay in the school magazine The Carliol giving insightful observations of ravens and peregrines. Awarded a school prize, it ended thus:
“Many are the days I have spent in search of all kinds of birds throughout various types of country – wood, plain, marsh, river, estuary and moor – yet it is the mountains which make the strongest appeal. Not for one moment has this lure of the wild diminished or abated, rather it has strengthened throughout the years, and may the birds always exist to lend additional charm and attraction to the hills of home.”

Years later of course Derek published the definitive work on the Peregrine itself – a Poyser Monograph.

From these modest but thoughtful beginnings, Derek emerged to become arguably one of Britain’s greatest naturalists of the 20th century, and certainly the prime architect of so much of nature conservation in post war Britain. 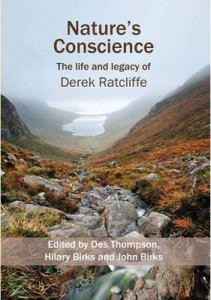 Today, a special book is published in honour of Derek’s many contributions. Nature’s Conscience: The Life and Legacy of Derek Ratcliffe (edited by Des Thompson, Hilary Birks and John Birks, and published by Langford Press) has 30 chapters on the many facets of Derek’s life. I wrote one of them, and as I did so I was constantly reminded off the monumental efforts Derek and colleagues put into protecting nature. Their weapons were evidence, dogged determination and building partnerships of like-minded individuals. Evidence was a tool to argue for change. Changes of policy and public perceptions about human impacts on nature were vital.

It was, after all, Derek who proved the disastrous effects of pesticides on peregrines and other birds-of-prey, who came up with a system of defining the best places for wildlife in Britain, who led the fight against afforestation of the uplands, and who ensured that nature conservation was led by sound ecological science and not value judgements. His knowledge of the landscape was encyclopaedic, and he was equally expert on raptors and waders, mosses and peat-bogs, alpine plants and mountain ecology. There was hardly a corner of Britain where he had not visited, walked, and above all observed. He was a fearless defender of nature, and quite prepared to expose the flaws in the arguments used by those who would prefer to compromise, or worse still, ignore the needs of the natural world. Though quiet and unassuming, and almost unknown outside nature conservation and scientific circles, he was greatly admired for his wide expertise, scientific integrity and steady flow of published work.

In the Foreword to the book, Professor Sir John Lawton writes: “In a world where too often nature struggles to survive, the Peregrine is emblematic of recovery and improving fortunes – and we have Derek Ratcliffe to thank for that.”

Amen to that. I think we should designate 21st of April Derek Ratcliffe’s national peregrine day. Without Derek we would have far fewer peregrines and other raptors. With the many assaults on our raptors we need more champions like Derek. Get the book and be inspired. There is just the chance that someone will pick up the 600+ pages tome, read it and then strive to make a difference – as Derek did. 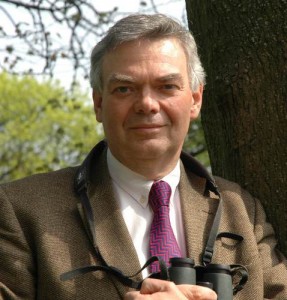 Stuart Housden is the Director of the RSPB in Scotland.