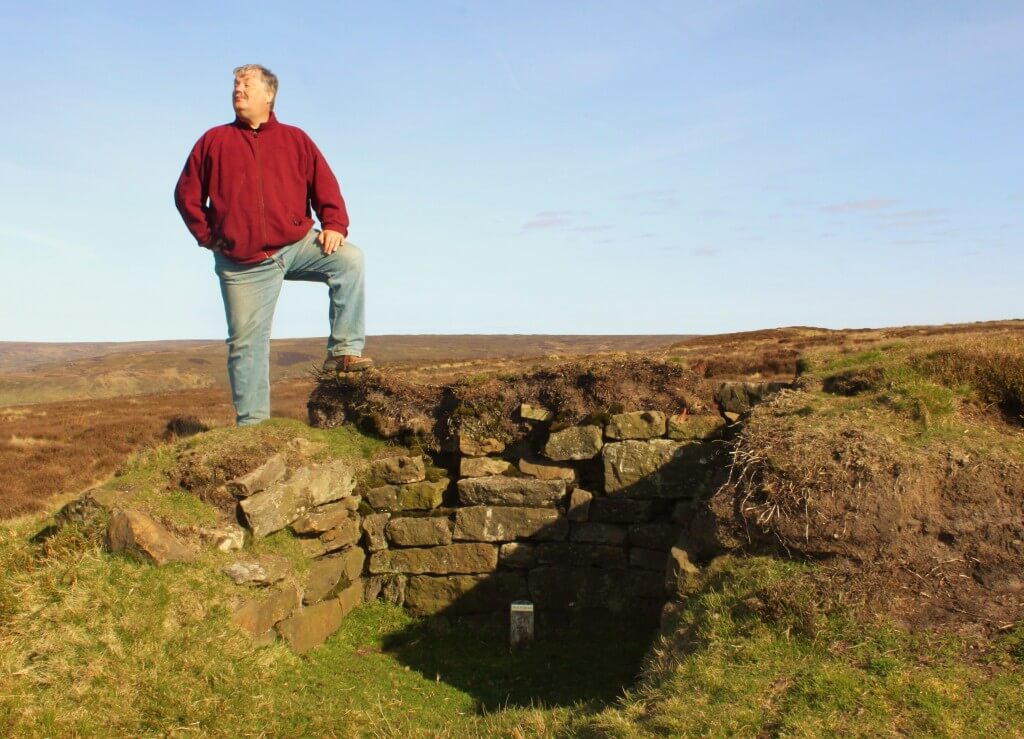 Henry took this photo of me in the North York Moors.

Have you got some grouse butts near you where you could be photographed?

That was as far as I’d got with writing this blog when the news of three missing adult male Hen Harriers from active nests in the Forest of Bowland came out yesterday.

How stupid are the Hen Harrier killers?  It’s possible that one of these birds might have died of natural causes but it strains credibility too far that in an area of driven grouse moors, where Hen Harriers have disappeared in recent years, that we should not make the assumption that these birds have been bumped off. If one of your neighbours disappeared unexpectedly you might be worried and perplexed. If three young men, family men, from the same small village all disappeared at the same time then you’d be pretty sure that something fishy was going on. If last year, two young ones had disappeared just down the road too then you’d be looking with suspicion at the locals. We are looking with grave suspicion at the Forest of Bowland but also at every grouse moor in the north of England, and most grouse moors in the UK. Where are the harrier-killers? Who are they? Why hasn’t driven grouse shooting cleaned up its act even after last year’s increased publicity? I say again, how stupid are the Hen Harrier killers?

The GWCT says that it will comment on this matter today. Let’s wait and see what they say. And what the Moorland Association says. And BASC. And the CLA, and the Countryside Alliance. And the grouse moors, including the Duke of Westminster’s Abbeystead Estate, in Bowland. Silence won’t cut it after these events. And nor will some limp ‘Let’s not leap to conclusions’ statement.

And what will the Wildlife Trusts and RSPB say?

Maybe it’s best if the Hawk and Owl Trust don’t say too much unless it is to abandon their ‘Working with landowners is the only option. Let’s try brood-meddling’ option.

But whatever all these organisations say, there is a head of steam building behind more public, more challenging, legal responses to the wildlife crime that stains the reputation of grouse shooting in the British uplands. Some say that the suggestion of ‘occupying the butts’ should be done on 12 August or when shooting is underway – bad idea! Illegal and also too late.  We should be occupying the grouse butts, calmly, peacefully and taking nothing but a photograph over the next few months ahead of Hen Harrier Day.  We are the good guys, we want the law to be enforced, we must remain on the right side of it ourselves.

In a few days time it should be possible to launch the next e-petition to ban driven grouse shooting. How stupid are the Hen Harrier killers?

18 Replies to “Occupying the butts”